Hey guys, here is a  short video of my 24 year old lava lamp running.  I am posting this to find out if this is still normal behavior, or if the wax has started to degrade.  This happens after about 2 to 3 hours being on.  This is the one with the midnight base, and orange liquid white wax,

The main thing I see is it's getting too hot.  You can use an in-line dimmer on the cord to reduce heat from the bulb.

The main thing I see is it's getting too hot.  You can use an in-line dimmer on the cord to reduce heat from the bulb.

Hey Keith, thanks for the feedback, what about switching from the 40 watt bulb to a 25 watt? I currently  don't have a dimmer, and reducing bulb wattage would probably do the same thing.  Also what would be causing it to get too hot? All the new ones that take a 40 watt bulb work fine.  Unless it's maybe just because of it's age. I have checked the inside of the bass and it still looks in tact, and it does say not to use more than a 40w bulb.

I'll try the lower wattage bulb, and if that is too low, than will look for a dimmer that I can plug the lamp into.

Hey Keith, or anyone else:  I just ordered one of these from Amazon.  It looks like it's what I need: https://www.amazon.com/Lutron-Credenza-Halogen-Incandescent-TT-300H... to help control the heat of the older lamp.  The new ones don't have this problem.

That's because the new one's have no flow.  They have China flow, one blob up on blob down.  You will never see a china lamp drop a blob stretching from top to bottom, simultaneously as a blob stretches from bottom to top!  Oh, and nice choice for dimmer, should help with the "older lamp" flow!  Good Luck!

Hey Mr MaGoo, I've seen both in recent lava lamp purchases, and they've all said made in China in the base on the sticker.

Here is a 52 0z I just got about a week ago, and it has blows and stretching going both ways: https://www.youtube.com/watch?v=N718OInijJY

And these are also new and made in China: https://www.youtube.com/watch?v=xNSyXZfMYJY

The older lamp did the exact same as these newer ones before it started overheating.  So that's what I'm judging these by.

So maybe you've just had bad ones.  Unless I'm missing something, but I'm just remembering how the old one has always worked, and don't see any real difference in these new ones once they heat up.  Takes between 2 to 3 hours to really get a constant sustained flow/

A bad lamp is one with flow like I spoke of earlier, will post some pics of what I am talking about, think we not thinking on same lines.  Saw none of the lamps in video do what I was talking about, but will post pics shortly.  I would take those supposed bad lamps all day long compared to what is being produced today.   But, hey... that is just me.  Different strokes for different folks!  Let us know how that dimmer works out on the old lamp!

A bad lamp is one with flow like I spoke of earlier, will post some pics of what I am talking about, think we not thinking on same lines.  Saw none of the lamps in video do what I was talking about, but will post pics shortly.  I would take those supposed bad lamps all day long compared to what is being produced today.   But, hey... that is just me.  Different strokes for different folks!  Let us know how that dimmer works out on the old lamp!

Will do, and you're right as far as terms of thinking because my old lamp is the only lava lamp I've owned, so it's all I have to compare the new ones to.  I've always grown up with hem around, and I've seen them in stores, and have known people who have owned them.  However, I've never owned one until I was an adult, and I got that old one second hand.  I didn't buy it new.  So I have no idea if it ever worked as it should have either.  I assume it has because it heats up and flows, but all the videos I've seen on YouTube of people with both old and new lamps they all do about the same thing as far as I understand.  I'm not saying different lamps have different patterns though.  Just saying I have limited experience.

If people who collect and make lamps feel like they should be made and function a certain way.  Then Mathmos who created the original lamp should do what Apple has done with their products and be the only one who can manufacture and sell them.  I would have bought my lamps directly form them.  However, they don't make it easy to buy from outside the UK.  Oh, by the way, according to another member here.  After showing pictures of my old lamp it seems to have been concluded it wasn't any genuine model created by Mathmos, or even Lava Lite, but rather a custom lamp.  However like I said, I really don't know much about it since I didn't buy it new. 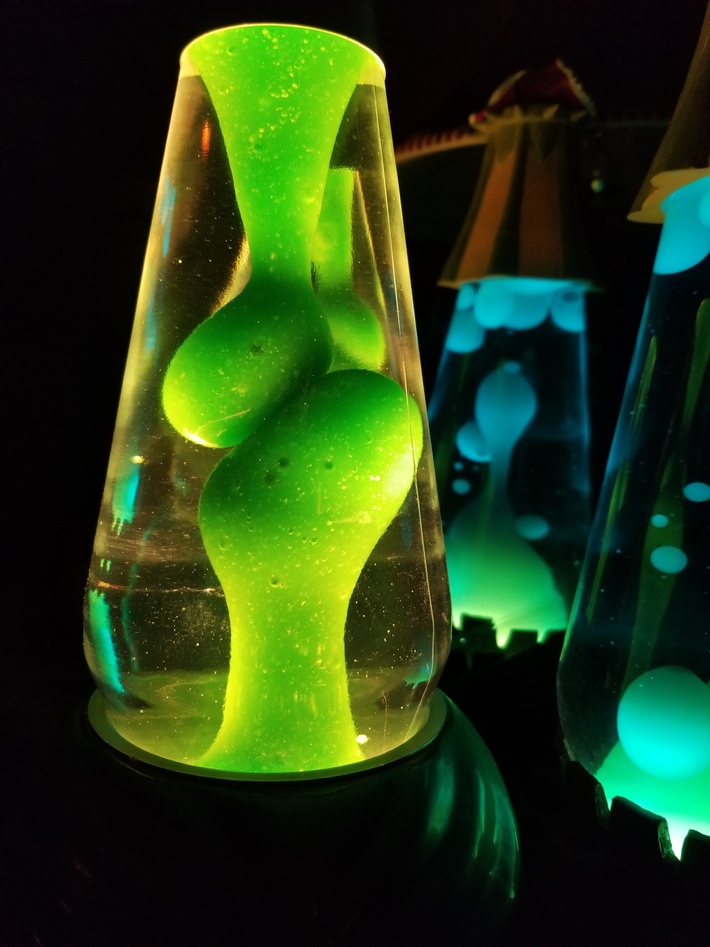 Here just a couple of examples of flow I was talking about.  Talk amongst yourselves.  :)

Here just a couple of examples of flow I was talking about.  Talk amongst yourselves.  :)

I've seen lamps do that I think my old orange one has done that some of my smaller ones do that but I see the difference.  Probably different chemistry then what's used today.

Yes that dimmer should do the trick.

Wax reacts differently in different lamps even when everything looks the same.  Maybe physical bulb size makes it sit higher or lower in the base, maybe the socket in the base isn't exactly at the same height, who knows what other factors.  These things cause the same size lamps sitting side by side to flow differently.  Also globe wax/water formula can differ between batches so globes will have flow changes.  Overall USA formula lamps will flow more stretchy/serpentine like the samples Magoo posted, china formula will tend to have globular balls.  China formula is much more inconsistent with some globes having pretty decent flow and others barely any flow at all (and with other issues such as wax sticking to the globe).

Your globe in question, in addition to looking overheated, also looks like it has been used quite a bit and the wax starting to show it's age.  That being said it should have a lot of life left.  The dimmer will help, as well as not running the lamp too long.  6 hours or less would be good but more importantly try to never have it on for more than 8 hours.  (This is a good rule of thumb for all lava lamps except the really small ones which should not be ran that long and the larger Grandes that can be run much longer)

Thanks Keith, the dimmer will arrive tomorrow, and will connect the lamp to it and give it a test.  I'll let it heat at full brightness then dim it to help keep it cooler.  Yes that lamp has had it's use plus since I got it second hand, it could have been used heavily before me as well.

My main lamp display is on an amazon smart plug so it runs 6 hour cycles with about 4 to 5 hours cool down time in between.

Hey guys! thanks for the suggestion about the dimmer.  This old lamp looks like it's brand new now!  I received the dimmer today from amazon, and plugged the lamp into it.  I let the lamp heat up at full brightness then slid the slider switch down a bit to slightly dim but not too much.  It actually started moving around very nicely without breaking apart.  Here are a couple videos, I think you will be impressed with the results as well: