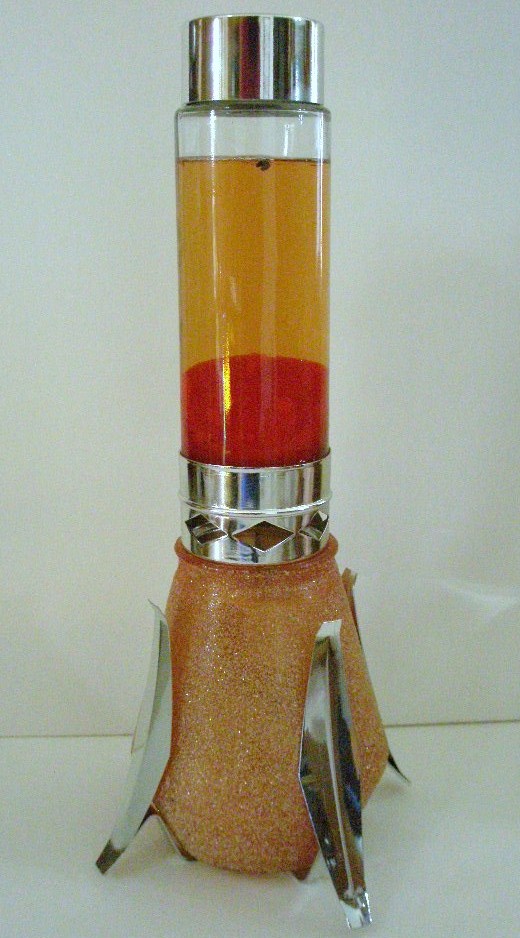 Permalink Reply by Erin on October 26, 2011 at 7:52am
I can help you with that. If you send me the file, I can work on getting it posted to the Lava Library. I've been working on getting Jonas' stuff in there. I think you can send me file attachments through this site. If not, PM me and I'll send you my email address. Can't wait to see this document! I had no idea there were 25 varieties!


I'll finish updating the "History of the Consort" document in the next few days. I've been compiling information for the last couple of years. Included are descriptions and pictures of at least 25 varities of Consort type lamps, in both lava and glitter. I've also rated the lamps on their rarities.

Jonas, can I have your permission to paraphrase some of your text from this thread in my document?

If an administrator can tell me how to post a word or pdf file to this site, I'll be glad to put it in the "Lava Library". If I can't post it directly, perhaps I can email it to an administrator who can then make it available on this forum.

Again, I can't say how wonderful it is to see this lamp for the first time.

I'm hoping that one day a Meditation Consort will also surface.

That warranty you scanned shows some new information!

Eventually, the Meditation Series and Empress left, and the black squiggle and gold starlight Aristocrats appeared along with the Executive, I had formerly believed that all of this occurred in 1968, at the same time. This model list proves that this was not so. The Empress is gone, but the Meditation Series isn't. The new Aristocrats have appeared, but the Executive hasn't. And the newer style Continental is pictured!

You've assisted in yet more ways! Thanks a lot.

Permalink Reply by LampHead on October 26, 2011 at 1:05pm
A new address is also discovered, 1700 Irving Park. It does look to be attached to the 1650 building so maybe it was just a mailing address for the whole building.

Permalink Reply by Modulo '70 on October 26, 2011 at 7:12pm
All hail this Rarity! Nice when a blast from the past turns up at the goo. I love Consorts and their derivatives.

Its easy. When you hit reply and the text editing box pops up there is a link at the bottom left corner just below the box called "upload files". Just click it and upload the file like you would in an email.

If you have not noticed we have something called the "Lava Library" which we document all historical information on lava lamps. I included your find in the article for the continental.

Permalink Reply by michelle R yoder on October 27, 2011 at 5:51am
Cool! I am glad that I could help you with some history of these lamps!

Its easy. When you hit reply and the text editing box pops up there is a link at the bottom left corner just below the box called "upload files". Just click it and upload the file like you would in an email.

If you have not noticed we have something called the "Lava Library" which we document all historical information on lava lamps. I included your find in the article for the continental.

Michelle, the instructions mention an asbestos disk, and a spring clip. Is this in there, and can you explain it or show pictures? And how does the metal collar attach to the glass candle cup, or does it attach? The common (relatively) model has the collar actually screw onto the cup.

Also: If it wasn't stated already, the reason the non-electrics are so rare is that the entire glass candle unit was THROWN AWAY after use and replaced. The metal tray (or, in your case, the legs parts) and the collar which holds the globe were kept. So, once these were discontinued and you could no longer buy the glass candle cups, I figure most people eventually just threw the lamps in the trash! And at least with your style, the legs stay on - with the later style, the glass cup simply sits in the metal tray. At the time yours was made, the Continental 3100 was ONLY silver, and gold was only the Savoy Commercial Model. Can you imagine a nightclub with one of these on every table?

I keep hoping I'll run into one in a thrift store, and I always search the candle areas for the glass cups, which are similar (but by no means identical) to the ones sold then and now and commonly seen on tables in Italian restaurants.

Attached, photos of the later type. One is shown in silver with orange/yellow, with the lava screwed up. The other is in its "gift pak" box with an extra candle cup, in brass though the collar seems to be silver. About six or seven of these are known, a few of them with the box, but they're still considered quite rare. As noted before, the frosted finish on the glass is applied, and can/will flake off, whereas I think yours must be part of the glass.

Hi Jonas, sorry it has taken me a few days to respond, been hectic around here!

I don't know what the abestos disk is,and I don't see a clip anywhere. The Top part just sits in the candle holder. It fits snug, and has something that is around the base of this, that must make it fit more snugly. I will try to take another picture so that you can see what I am trying to say. I will post it as soon as I possily can! Have a great Halloween!