Oh and I posted a video to here:  http://www.youtube.com/watch?v=CiS8XY9d_t4 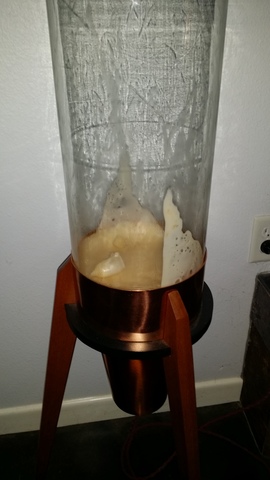 you must be very patient to go through all of this trouble and the lamp still be in one piece.  that really stinks with the MT goo.  the SG you achieved relative to the original is a nice touch.  i hope this "new" batch of wax holds out (i'm sure it will).

Love the green!!  It has a nice "sci-fi" glow to it.  Sucks having to redo everything though.

Keith that is what I was hoping to achieve a sorta funky retro color scheme as it fits the vintage of the lamp. I think the pink yellow would achieve that too but in the end this green yellow works better for this particular lamp.

Brad...yeah it was frustrating but I just love this lamp and am so thrilled to have it around. It is a labor of love for me. That said I don't want to have to refill it anytime soon.

This new wax has an interesting story behind it too and I will post about it in the near future.....it's a shocker LOL!

You said you were using Lava Lite wax, are you dumping USA lava

lamps for the wax & liquid ?

Shame about the lifespan of the MT goo, what a pain in the ass to change out such a massive vessel! It looks to flow real nice with the Lava wax, crazy that is Chinese wax, I guess it has more power in numbers

chinese wax you say?  that flow is really nice.  this suggests that the chinese wax is OK, but the liquid is in need of a tweak.

LOVE the yellow and green! What I wouldn't give to have a lamp like this. :) It's so beautiful. I would not have the patience you do, though. Well done Bill!

Thanks Erin.  I guess I am fairly patient, but also seem to possess a healthy dose of crazy too.  I really don't want to do this lamp again any time soon.  I want to make a new, leak tight sealing device for it too.  I want to pack up the original rubber seal and metal plate system and use something that I can seal off completely.  The way these lamps were designed to close up with the plate and gasket is not tight and when the lamp runs moisture builds up under the copper lid and tends to run down the bottle.  I plan to use some thin acrylic and build a slightly elevated lid that I can silicone tight around the edge.  So I want this thing to run reliably for at least 1/2 a decade.

I shut if off completely last night and a 1/2 hour ago fired it back up from cold to see what it does with this Lava Lite wax fill. Right now it is spiking like mad and in a few hours we will see how it does from a cold start.  I hope there is no sticking, I am confident that this will be the case the Lava wax seems to be less likely to stick than the M.T. Goo.

Here is a pic of it spiking as I type this: 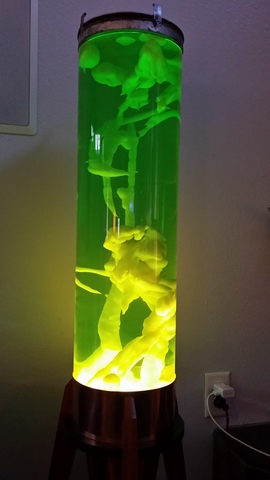 Permalink Reply by Critter on January 8, 2015 at 6:07pm
Thanks Loren. It is a striking color combo for sure. Yellow has to be my favorite color wax as it is so versatile with many fluid colors.