I am quite the nerdy loser with the lava lamp collection. I am certain that you, my good friends, can add many lines to this list, but this, in no particular order, is a sample checklist for collectors on their progression towards being a complete loser as I am:

- I spent many hours actively searching ebay, then craigslist, then newspaper classifieds and foreign ebays (and on and on and on...) looking for a score. I still do.

- I bought my first icon.

- I NEEDED a tenth Grande to balance the shelf.

- I cried real tears and experienced real depression in the great Christmas crash of 2014.

- I tripped breakers in the house because I was running too many lamps.

- I realized that, as I am an ass man, I am also a goo man. I just don't care for glitter lamps.

- I reached a point where I have seasonal lamps I only break out at Halloween or Christmas and such...

- I did my first gookit.

- I joined this here club on the internet to find other likeminded nerds.

- I learned to envy those with lamps from Europe and I take pride in the fact I have made a few other collectors jealous with some of my prizes.

- I realized that every lamp has its own personality and flow style and I describe them as if they are alive.

- I have spent an amount for a lamp I just HAD to have that left me a little ashamed.

- I stopped giving anything other than lava lamps as gifts years ago. Birthdays, weddings, housewarmings... All get lava lamps (And I tend to turn them on when I go to my friend's houses to visit.)

- I somehow accumulated spare parts...Lots of them. I also have lamps I have never opened and bought "for the collection".

- I have made plans for one of those 8 ft. tall ones in the same manner of fantasy I made plans to win the lottery or get Elizabeth Shue naked. (Boy, that sure shows my age!)

- I reached a point where I began rotating the lamps around the house all the time to have fresh views and appreciation for all of them.

- I have somehow gathered a huge box of bulbs.

- I scored our first Colossus. And later a second and third in the great January LAVA giveaway of 2013. And now number four which is what I am actually getting to today...

Not too long ago I found a Humongo for sale on Craigslist. It is black/clear and the base and cap is the black granite covering. I posted it here and no one bit (I suppose because the posting was asking for $5k?) so I called the person up and offered $800. She agreed so long as I did the work so I set up a shipper to pick it up and pay for it for me and, one week and $1200 total later I had number four in the house here in Texas.

I knew when I bought it that it was in bad shape but I also had hope that the photo made it look worse than it would be in person. 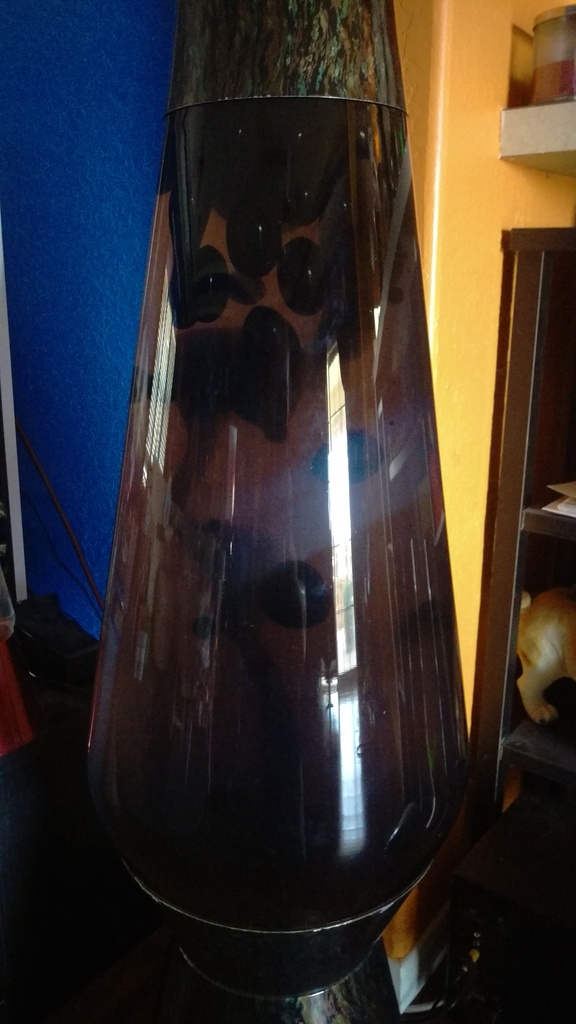 No such luck. That black wax has bled into the liquid so bad that it can only be seen through if I put a bright-enough-to-see-mars flashlight behind it. 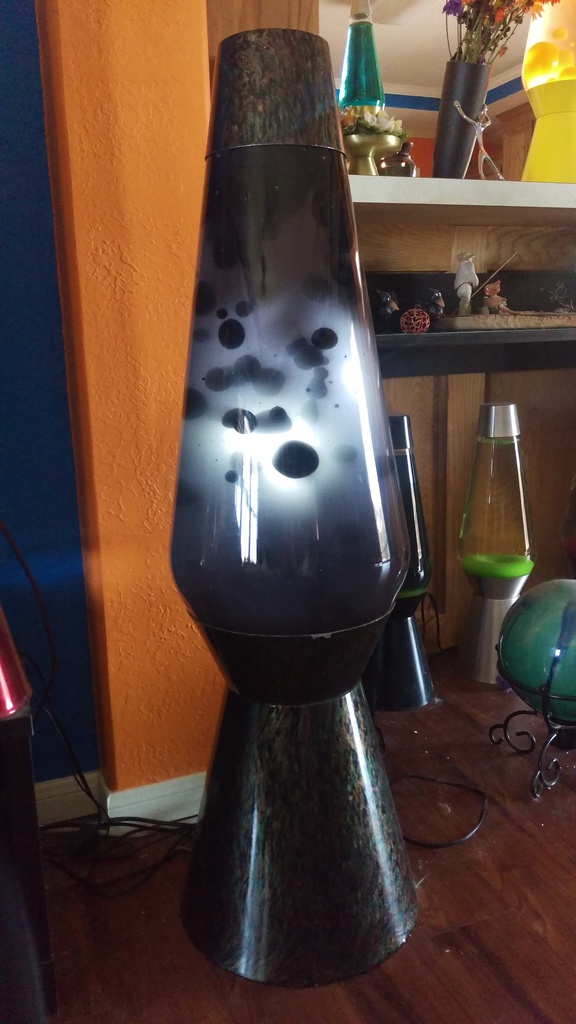 Because I like to share with my fellow losers, I always said that if I ever did a gookit on one I would share it as I did it. I know I am not the first to share such a thing, but we all got a kick out of another one a few years ago so I am going to share my experience here with my friends. 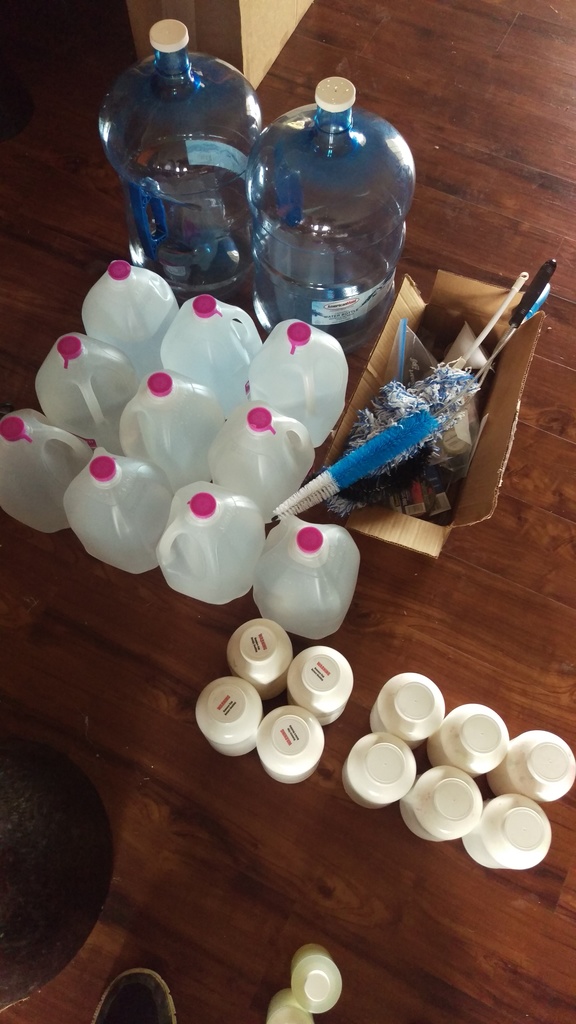 I hope this works...

Nice work! I'd love one of those huge lamps, but sadly, I think these are way less common in the EU. Never have seen one for sale here. I know you Americans like to complain about the fact you can't get Mathmos and the EU can, but it's not all sunshine and rainbows here!

And yeah, cameras never do much good when it comes to lava lamps. Always ends up looking different, if not completely washed out.

I've decided to do it!

I had considered glitter, but with the reputation of exploding Colossus/Humungo globes, Naw,..

The Lava  is actually "fuzzy"  when cold and the fluid is not as clear as I'd like it to be.

I think it's seen it's better days

The fluid was probably a color at some point as it has a golden hue.

I thought of filtering it, but if I'm going that far,..? WTH?

I have a 12RV pump and filter. The pump will come in handy to MT it

When I run it, i find that the operating temp and room temp is waay too critical.

Not that I'm worried about the electric bill now,(included in lease) but will be in the near future when I move

I have so much invested at this point, between cost, shipping, paint, table, etc,...what's another $250 to make it perfect?

Hell, I spent that much on a friggin blacklight grande experiment that exploded all over the place! 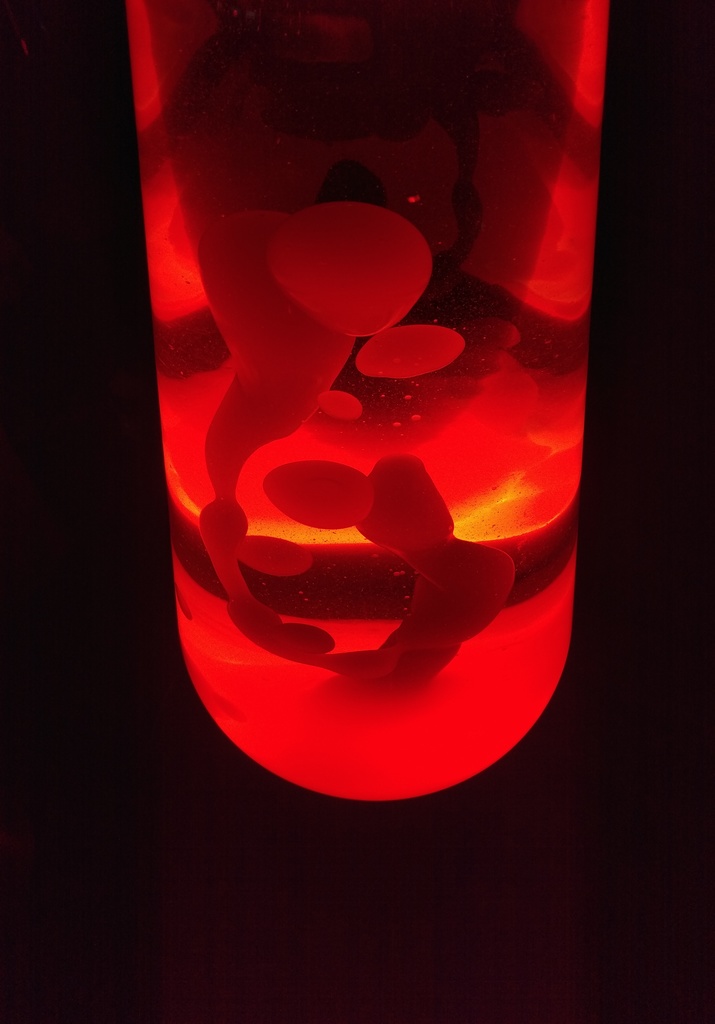 It has been a couple of days now and I have made some progress on the lamp. It us very hard to capture the color right. It is really a very vibrant orange and looks super stony. 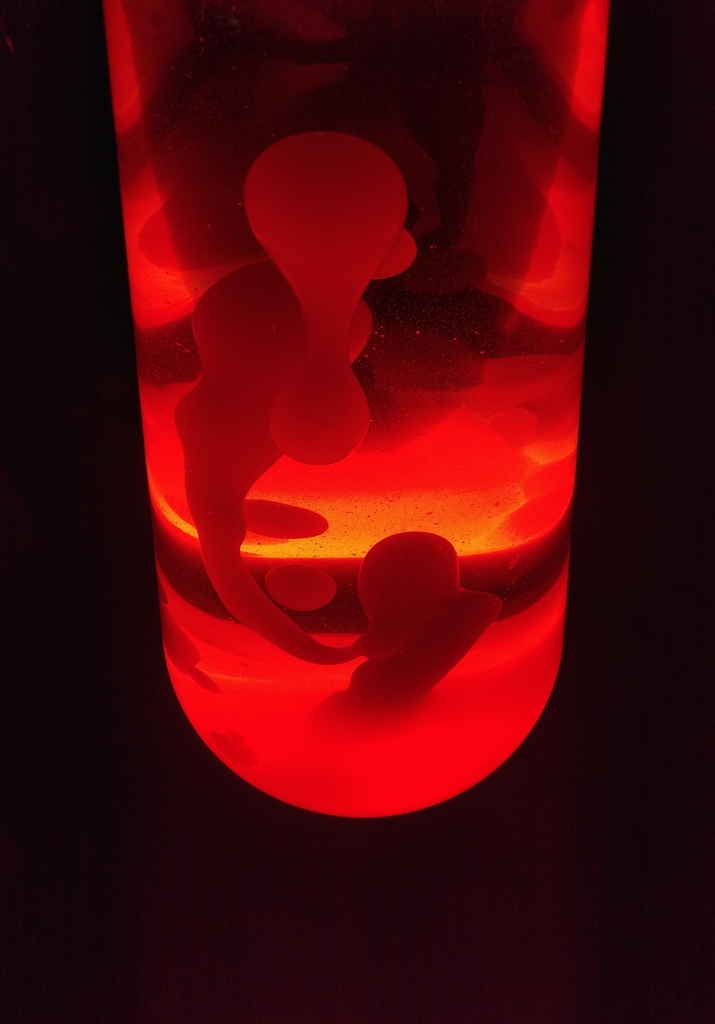 And here is the flow this morning...

There is a piece of me that thinks it still needs a little more soapy stuff in it because it is a bit too ropy for my taste. Also, I am going to cool it down and check the bulb. The brace for it is a little loose and one side of the base is a good deal warmer than the other leading me to think I have the heat lopsided which could make a big change in the flow. That said, after three days of running it is still letting a lot of air out and keeps lifting the cap. Once the air gets out of it there is a good chance it will change and adjust as well.

Claude, If yours is cloudy then do it. If you are like me, you will be very happy with yourself when you get it going again. As for the weight, once the water was out of it it was only about 25 pounds or so. The size makes it a little tough to move around easily if you are short statured,  but it not as bad as I may have made it sound. The other part is the fear of breaking it. That easily adds about 150 pounds, but it is sooooo worth it!

Have a marvelous Monday and good, clear flow to you, friends,

While I wait, here are some pics of the grande I bought from another member on here to test for the big one. I was really thinking about gold sharpie and wanted to see how I like it because silver was awesome. People are saying that they can't get flow from a goo kit. That was not the problem as you can see. The problem is that the gold marker, at 32 sharpies in, has not given the goo a metallic and beautiful look. It has left it looking like melted baby shit instead. I am super glad I tried it before I did it if you know what I mean. 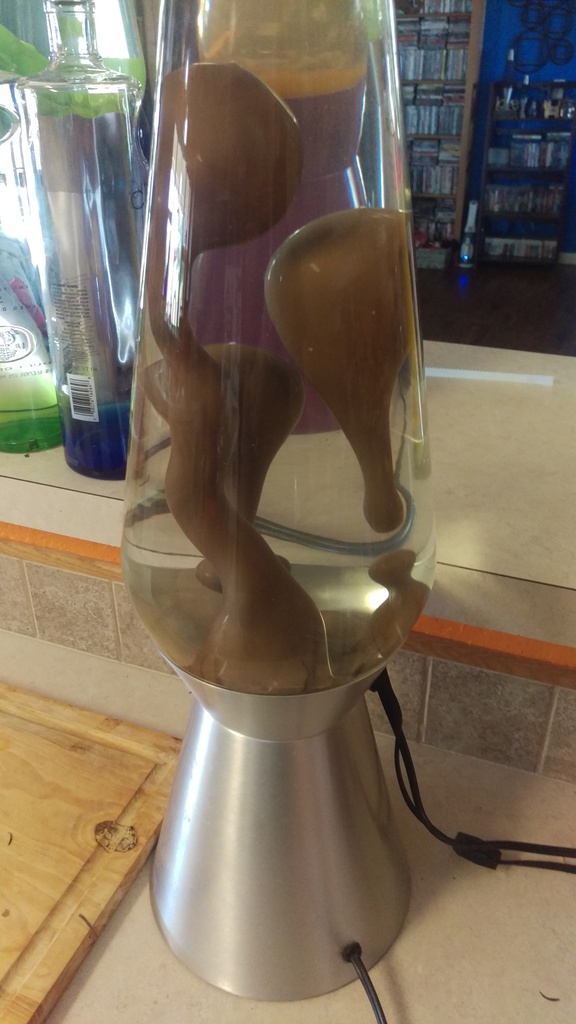 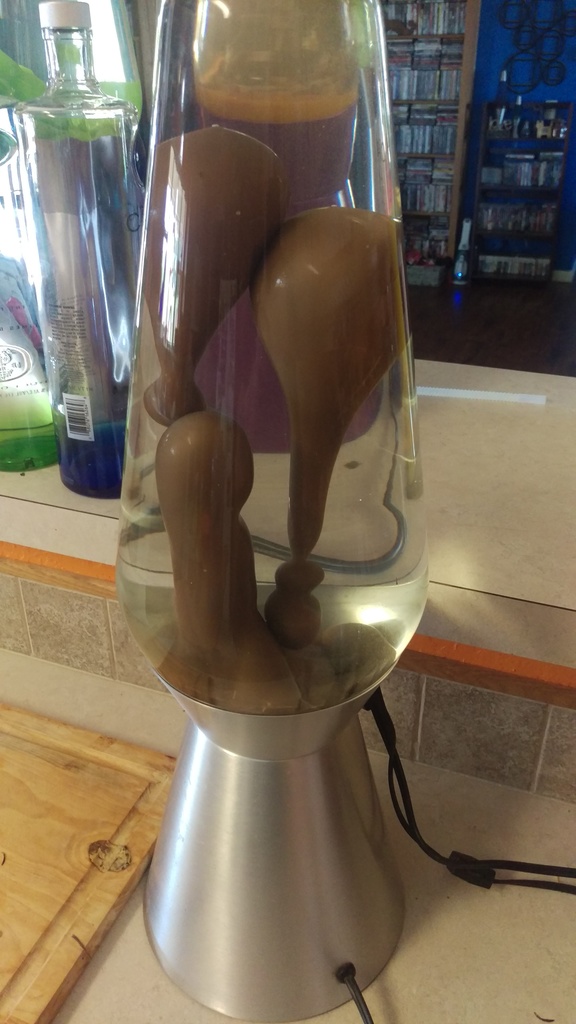 Since didn't work out, I think I am going to have to go with orange.

Current status of the White monster

Part of the deal was to rego it.

I think i need to hit him up for a chiro Visit! LOL 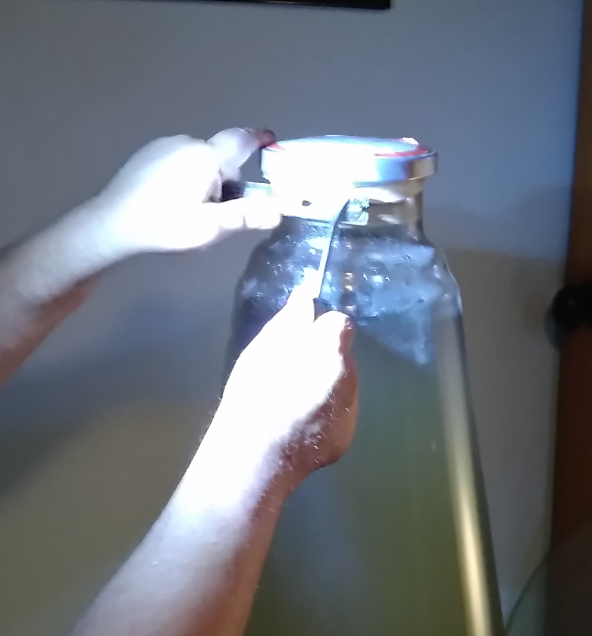 Since the cap is sealed with silicone and there is a great chance what remains (even after scraping) is no good and will prevent you form making a tight seal, Use a wire wheel brush on drill or Dremmel to clean top rim of globe, then clean with Acetone bath

Spilled some on the floor of garage (no big deal) , then had the bright idea that i could take the globe and pour the remains into the 2 large mason jars sitting in the sink.'

Good thing its a straight shot to the septic cause i dumped @Quart down the drain! 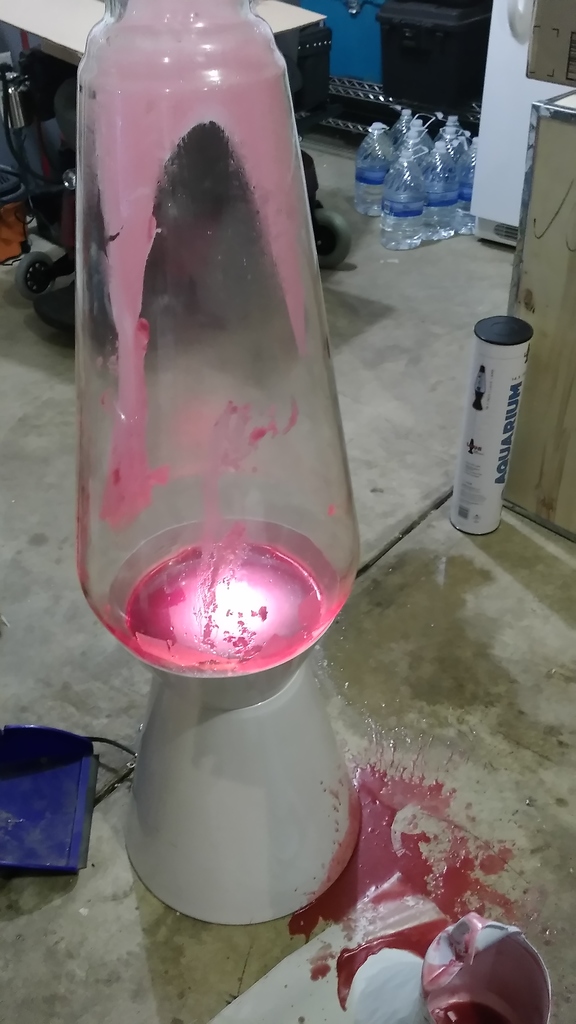 (great idea on the disposable mop) 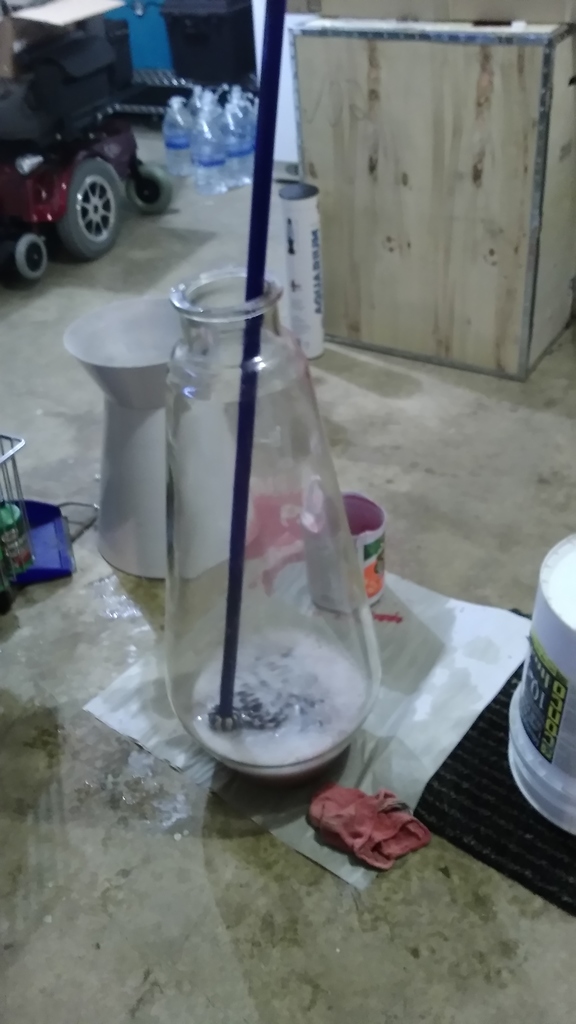 What did not go down the drain and on the floor 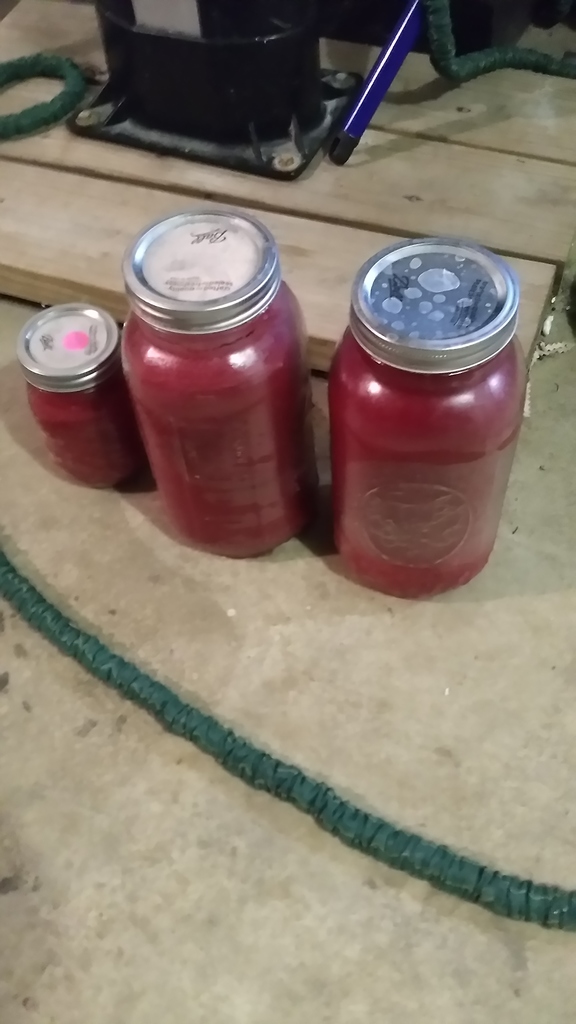 (photo taken before belly button lint was removed from coil) 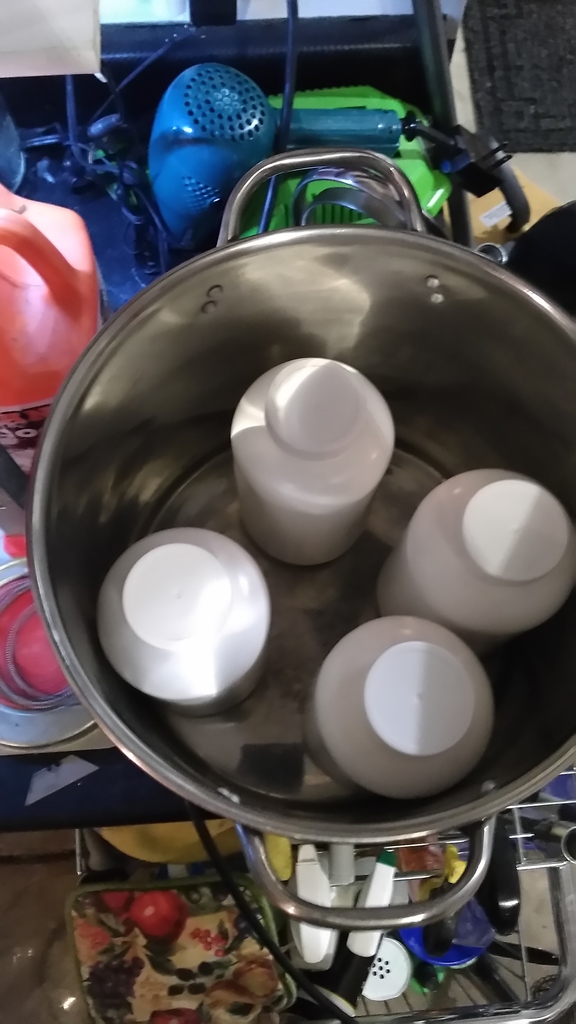 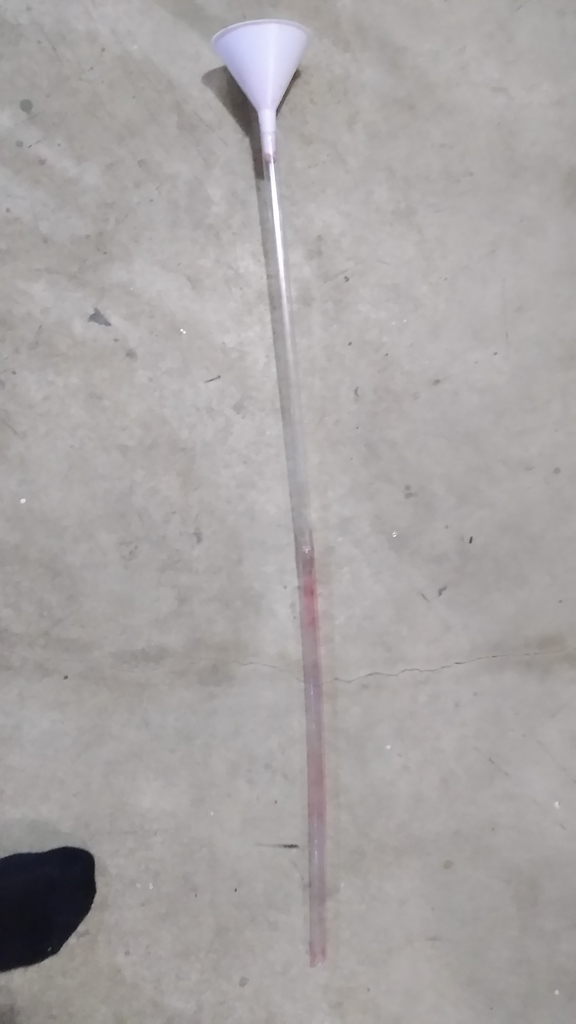 I reread this again to verify how much sufferant to use
A WHOLE 16OZ.+ BOTTLE?

its actually too tall

(And not everywhere it is not supposed to go)

Permalink Reply by Tim on March 7, 2017 at 1:49pm
I'm really anxious to see the out come of this project!! I have yet to see a fully kitted Colossus! What color are gonna dye the wax?

I'm really anxious to see the out come of this project!! I have yet to see a fully kitted Colossus! What color are gonna dye the wax? 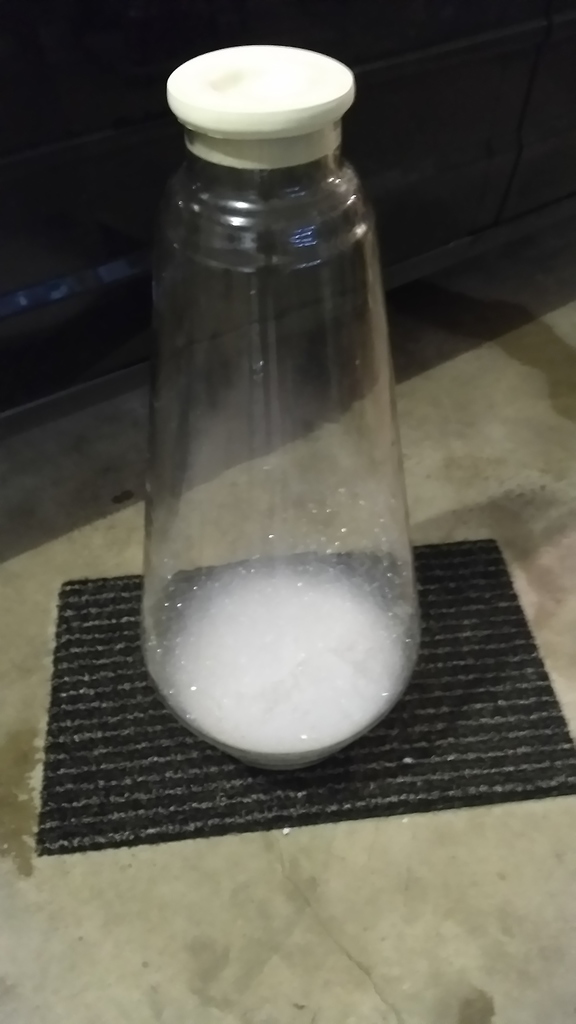 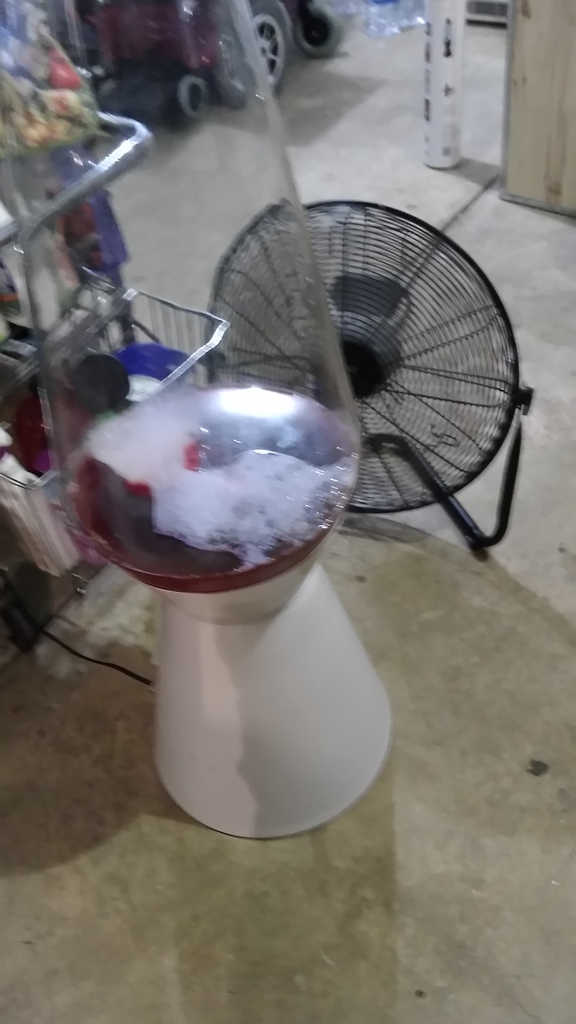 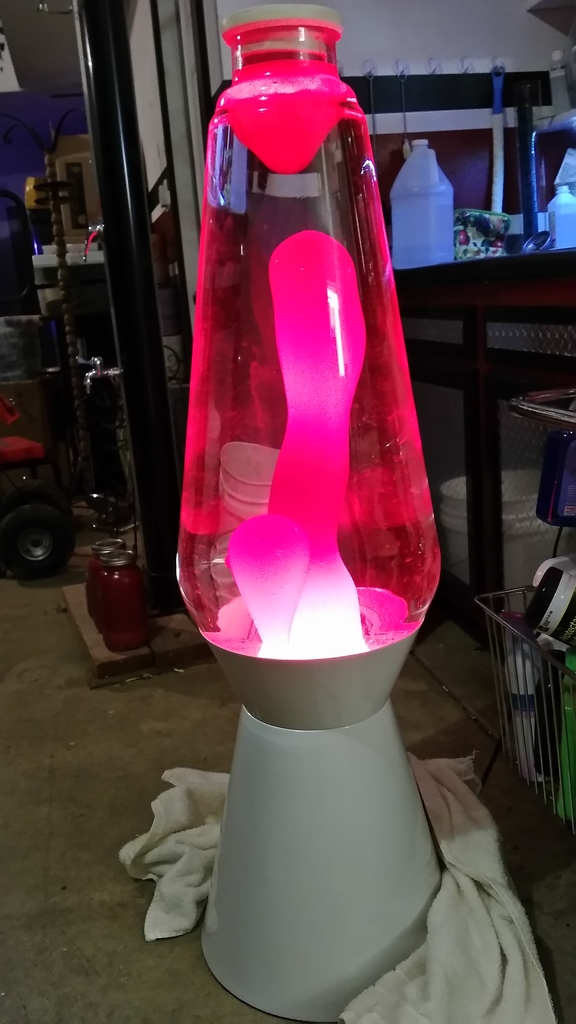 Its lookin good! So did you use 5 full quarts of goo then?

Seemed to have made for a better flow over MT goo alone?

I think washing it with boiling water and dawn (and an actual mop-lol) , Rinsing well, using the whole16oz bottle of Surf with a gallon of distilled water to coat the inside, then adding the goo, made a definite improvement against any sticking.

This is the first time i have been able to reach in and grab the inevitable "Floatie" of goo that you always get from first run and remove it by hand..

I Sealed it yesterday am, and fired it up again @9:00pm
The lucky recipient is due here @11am to take possession.

It turned out so nice, I having second thoughts of getting rid of it...

I'm really anxious to see the out come of this project!! I have yet to see a fully kitted Colossus! What color are gonna dye the wax?