I haven't cried this hard since The Notebook...

Nothing survived and some of these I have never seen for sale but one time.

I am so sad! Hope this never happens to you.

Good, clear flow to you all and much better luck than I have....

Take some clearer pictures of the bases and I can give you the names of them so you can at least start looking for replacements.

Oh no!!!  Shelf go down?  Earthquake?  What the heck happened?

aw man, sorry to hear this.  it's a reminder that it can happen to anyone.

...But at least I see some unbroken globes in there!

Oh no Jeff! Sorry to see of this fiasco, hope all pets and humans made it out OK. I will fly my lava flag at half mast for you today.

Could you salvage any of the wax/coils?

I apologize for never replying to any of you after this post so long ago. I was truly devastated for a couple of days and didn't want to even try thinking about it for a few months. Happening right at Christmas time wasn't much help either. Depression, over some stupid lamps...

I had already done some cleaning before I picked up the camera and thought to share my agony with others. In the crash, I lost all of the resin ones except for the one with the little daisies on it. That is the one of the set that I did not have. I also lost one of our coolest ones - the diamond deck one from that series that I gave the sharpie/goo kit treatment to. It was such a perfect lamp.

I also lost a Spider Man lamp because both the characters were destroyed and there were some pretty big chips on the rest. Gone was Marvin The Martian on a rocket ship. The Doors lamp was chipped but still kind of ok. But then there were the two Beatles lamps which were shattered. Yellow submarine is easy to replace and pretty cheap/Sgt. Pepper not so much. In addition to that, things bounced and others were damaged. Superman lost an arm, a pirate got broken and lost a sword, and a bird from the top of another whose base is a bucket of beers had its wing damaged pretty bad but it is not obvious at first.

What it turned out to be was that one of my fine cats had jumped on the shelf and the shelf was not too keen on supporting an additional 15 or so pounds on the edge.

A week or so later I was sad and looking on ebay when I came across a lamp I have never seen before or since. I would guess I paid way to much, but it was depression shopping and it got me to get my chin back up properly. Since then I have replaced a couple and managed to add just as many as I lost. They are just lamps, right? But then again, if you read this and it makes sense, then you know that these are all the kind you really have to seek out. It would have been so much nicer if it was my shelf of regular, go-to-spencers-and-buy-twenty lava lamps instead of these ones.

Here is the depression lamp I found on ebay... 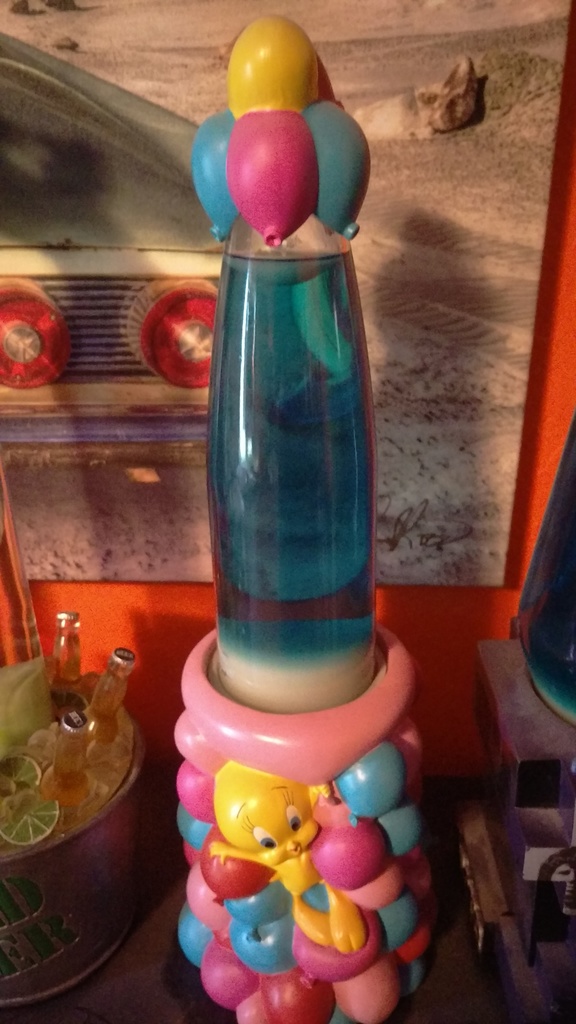 Good, clear flow to you all,