I have found what I want to collect.

And here it is:

At first I thought..."Well there's a mathmos jet for $28.99 delivered...already wired for the US...in METAL?" Turns out what I thought was the bottom of the lip on the base of a jet was in fact the corporate logo for Washington Mutual.

I know people are going to think I'm...a bit off, but I have fallen in love with this lamp. To me, the proportions are just about perfect, and I love how...

...wait. I just went off about this recently, in another thread.

"...They look MUCH better to me, in all regards! Look how well the lid and base seem to be integrated with the globe...smooth, uninterrupted lines! So sleek! The base looks more sturdy to me, also. Some people might say the design is too simple, but I say the base and lid are there simply to enhance what's in the globe, not distract from it. I still want to see a slightly taller viewing window (same overall lamp height, but shorter lid and base), but that is such a small aesthetic thing. I doubt I'll be able to find the EXACT size ratios, in the exact right proportions that I'm looking for without a lot of custom modding."

Well it turns out I DID find it, and there it is!

I just bought one of these, but I think the chances that I'd find another one are slim to none. I did a google search, and found where someone on this board gave one to their mother as a gift. I didn't look to see who it was or anything (and I won't), but I know that others of these have surfaced from time to time.

Does anyone have a line on one that I might purchase or trade for? I want about 50 of these. :( Good luck with that, right? LOL!! I want to mod them into every possible configuration.

I also want to know who made this. Was it just something WaMu paid to have built, or was this made by a company that made them for other people also?

I know the houses for glitter thing is a little weird, but I think it's hilarious considering what WaMu did to the American housing market. Washington Mutual, for those who didn't remember, was the biggest bank failure in history, and the second largest bankruptcy in history. That dates this lamp to before 2008, and that post I found was archived from the old board and posted in 2006...so I know it's from before 2006.

I know I've picked a hopeless object to obsess over, but...maybe not? Maybe there are more of these around than I would imagine? I've seen lava lamps that have WaMu on them (like a clear/green rocket that I found), but they are much smaller, made of plastic, and look like "buy in lots of 1,000" from China kinda fare. This thing looks like showroom quality. In fact, to me it looks like it was built to be bolted to the floor of a submarine. I can't believe that was only $9 to ship!

Can anybody help me learn more about this lamp?

If you want to see where Lava Lite gets there stuff, check here: http://oozinggoo.ning.com/forum/topics/random-just-doing-some

That is so cool...nice sleuthing!

Looking at the mimium import quanitie for the giant fludium 100 units is not a bad amount. - I mean in future you could get thoes, sell them to OG members and then the rest on Ebay.

I am sure they will sell quickly as Conrad have stoped selling them and they are hard to find on Ebay.

This one cracks me up. I think it's a pic from a member here:

From looking at the diffrent desings of lava lamp avaiable to be imported it could be a idea to group together and inport some unushal / hard to find desings and put them on Ebay - people will go nuts for them.

You know those test tube glitter/lava lamps with the flared base that have been all over ebay lately, with names like "oozy glo"? The same company that makes the KL-239 also makes those...or a knockoff of those.

I think they are the same though. In any case, I agree. I think that, even if I can't find a way to get my incoming glitter stock to behave in the same way in which my preliminary tests went, and I have to just color the liquid or add a custom glass color wheel in addition to a paint job (totally wasting my glitter stock and growing collection of punches), then I can get rid of the extras on ebay. It will take a long time though, either way.

I recken you can get your glitters to behave - I havent seen much varation in glitter quility so it should be ok.

There are a lot of knock off and copys out there - a lot of companies make the same or simmiler lamp e.g. peace lamp style. I have also seen copyes of the fireflow and jellyfish (mathmos design) - unforanlty China does have a repupation of copying western desings.

I sent an email to the manufacturer. I will kinda do what mark is doing, except this will be more of a group buy. If I get enough pledges to buy them from me I will put in an order for 100, sell the pledged ones, keep a few for myself, and sell the rest on ebay. A lot of work for a few lamps!

I love these. If anyone is importing them, I'd gladly buy some. 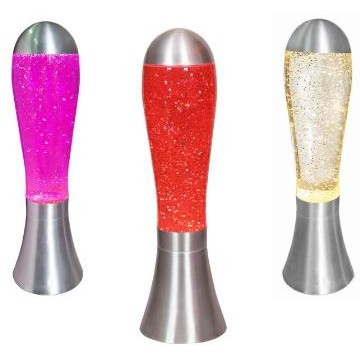 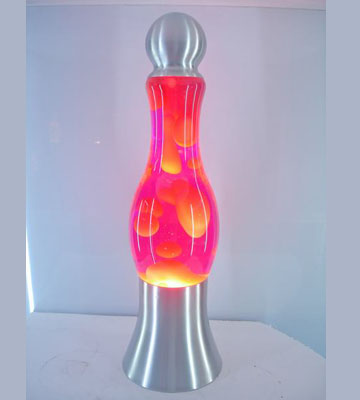