I'M SO DONE WITH SPENCERS LAMPS - LOOK AT THIS TRASH!!!!!

So I see they have 2 orange/black 52 oz'ers in stock which I originally wanted the last trip I made but they were out of so I got the pink/white.  I think WOW I got Halloween lamp.  1st one had white fluff in it and what looked to be like metal pieces on top of the what is supposed to be jet black lava.  Open tube 2.  Same issue.  Ok, so I see a green/black.  I figure oh well, I kind of wanted that color too.  Open up the ONLY green/black, sales guy says, "same thing"!!!!  Now another member of OG just got 6 or more lamps at his Spencer's in Pennsylvania and they were fine.  So, I'm sending the pics to Spencer's HQ along with a not so nice email that this is my 3rd trip of 1 1/2 hour drive only to look at lamps that have MAJOR issues.  Also, I'm forward a cc to Susan at LL.  This is ridiculous.  I'm making my own from now on.  Oh and the globes looked like starry starry nite too!!!  Look at these pics!!!  What even is this?? 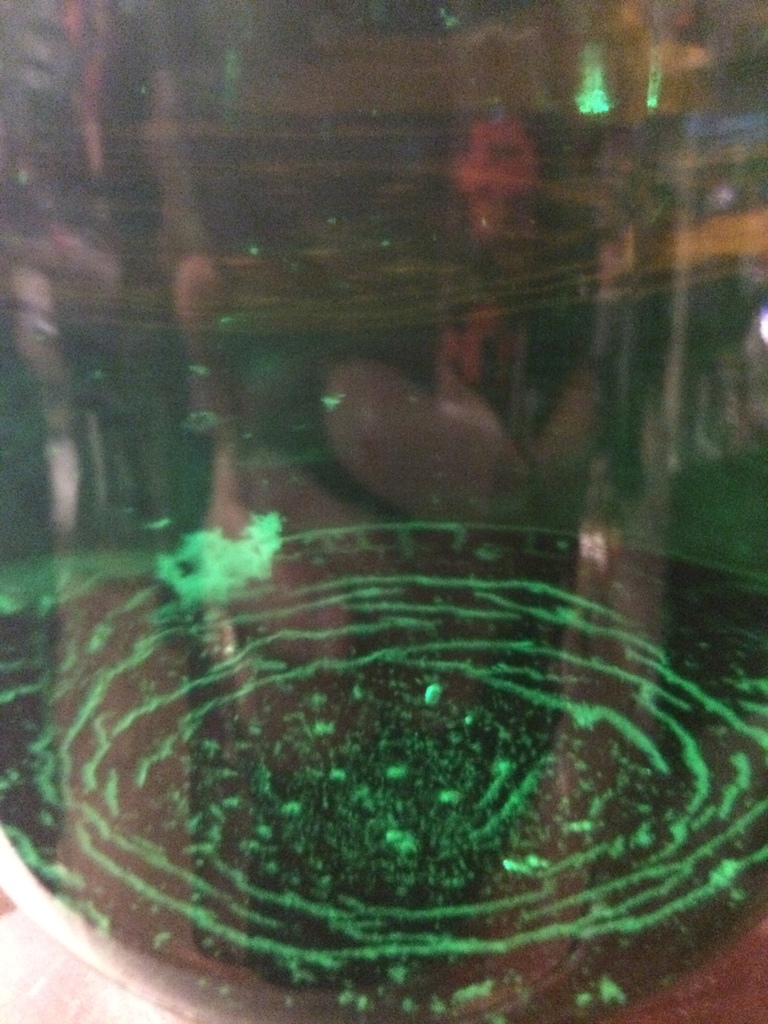 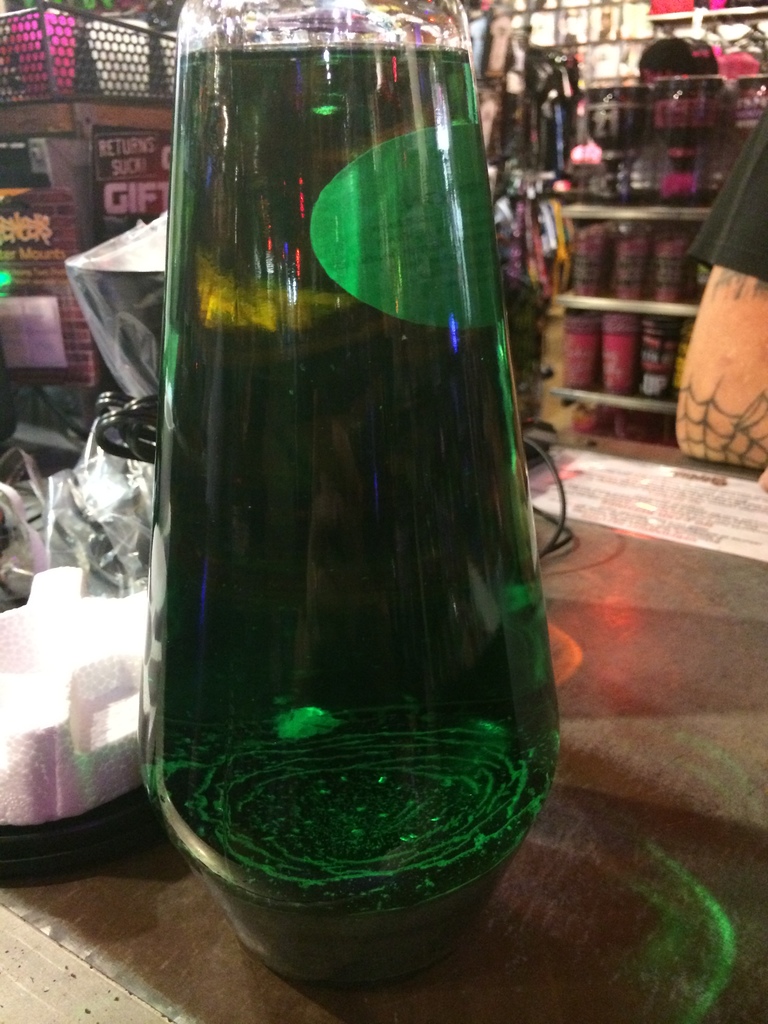 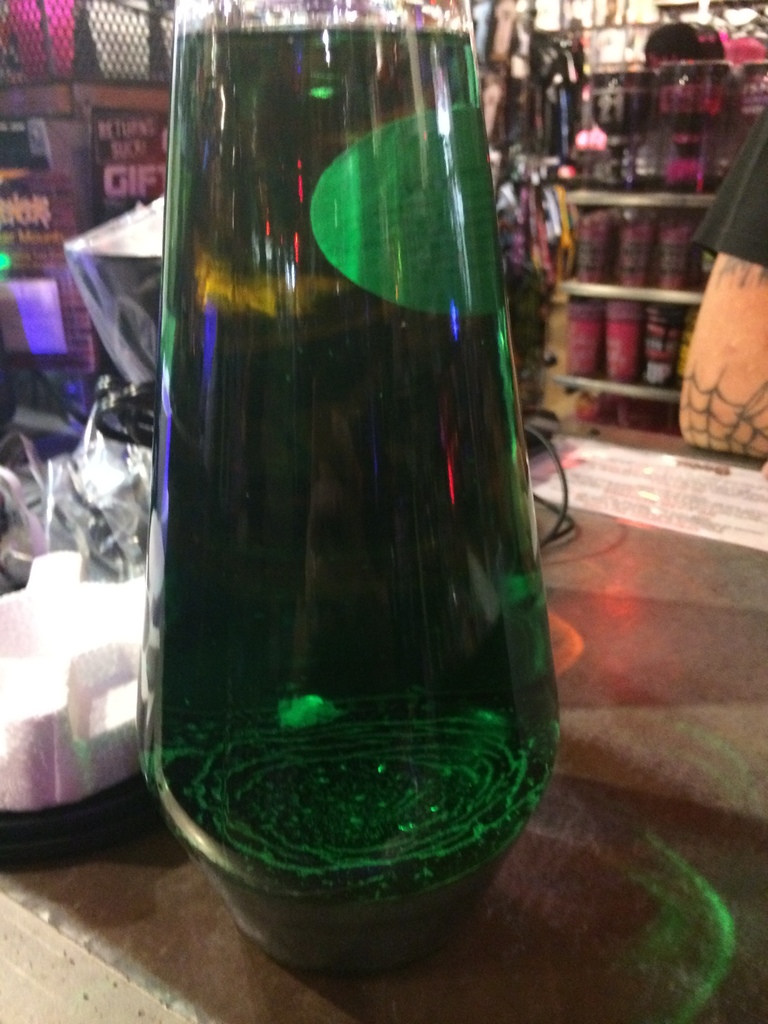 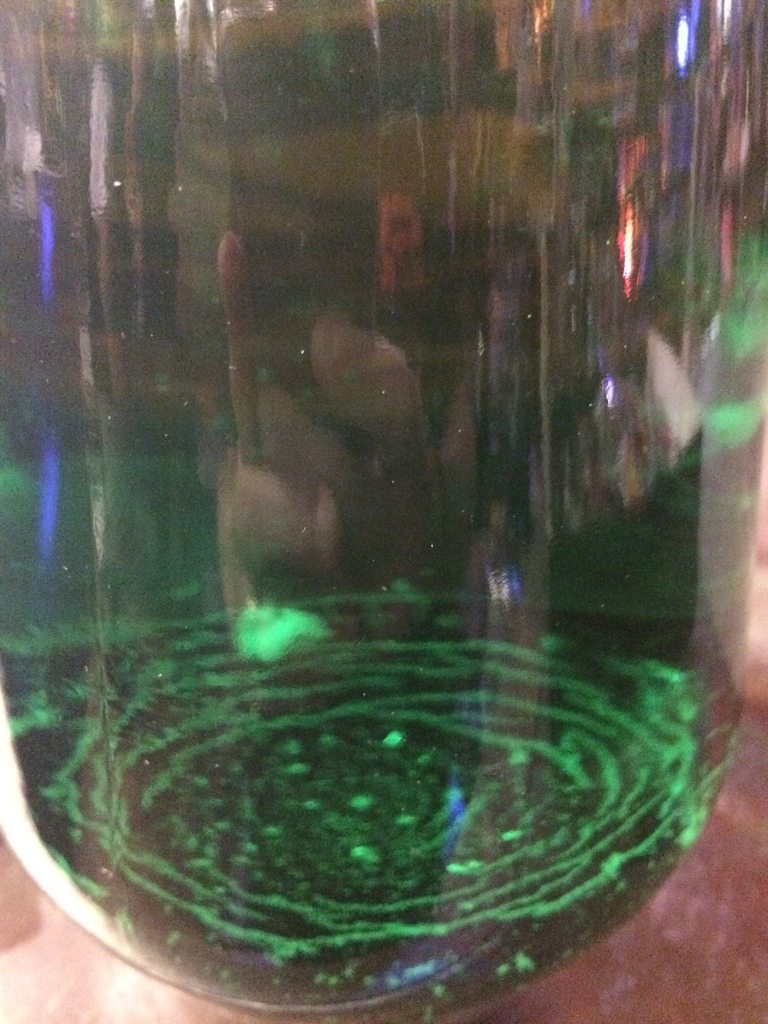 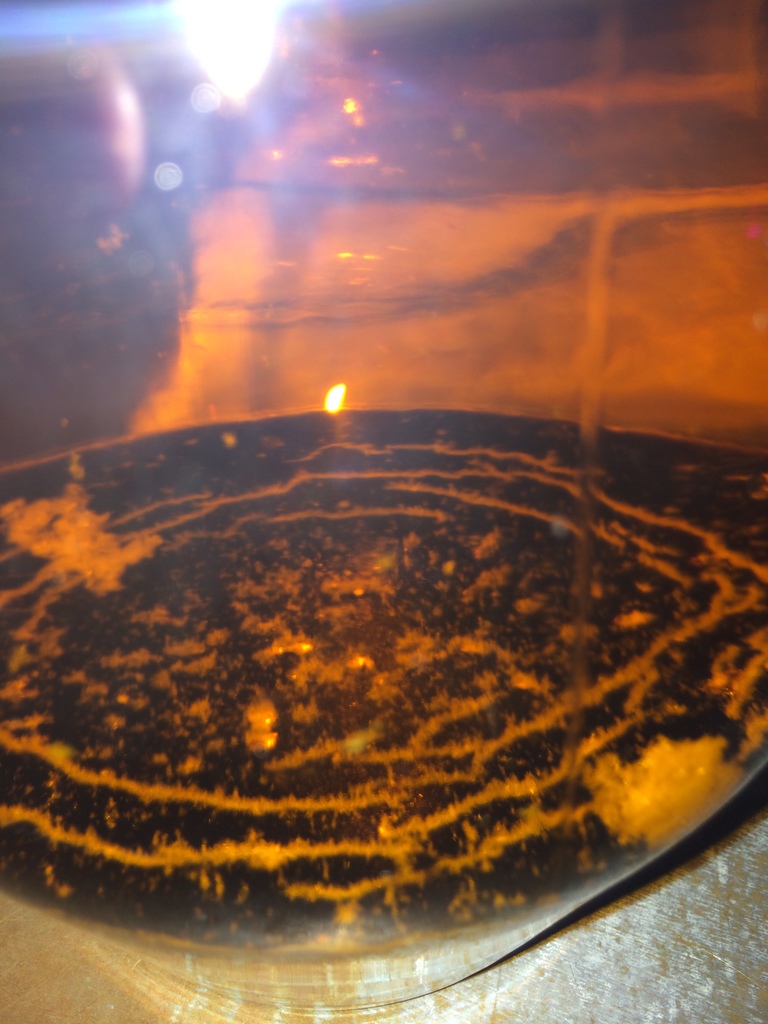 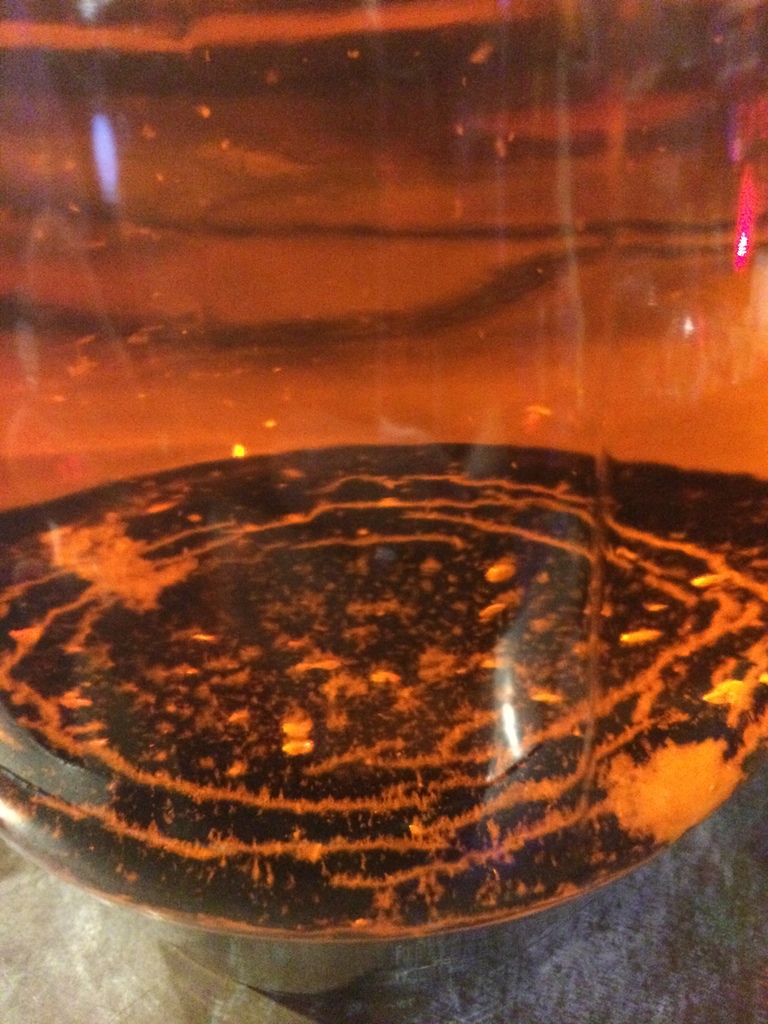 While it does look rather disgusting I have to speak optimistically on what you see. One of my green Heritage Grandes showed up in a similar fashion. It looked cracked like that and seemed to have dots of mercury sitting on top of the puck. I swirled it gently and they seemed rigid like they were not air pockets, but as you said, pieces of metal. It was a replacement so I was kind of frustrated but had nothing to lose since all shipping and replacement were covered. Fired it up and all was well once the wax melted down and took on its opaque color from the gel look.

Here is where I do not know if it was good, bad or a moot point... That replacement ran perfect for a few weeks, little over a month. One day it decided to detach from its coil. It still refuses to coil up, it sits as a steel spring in the bottom completely devoid of any wax inside of the springs coil

I cant spin this globe enough to coax wax into the spring, it will not stick to it.

So who knows, maybe that air/weird mercury junk on the surface fowled up the coil or something, I don't know. There could be hope in that globe though, as ridiculous as that sounds

Ya know Vox, I thought the same thing.  Looked at hubby, and he said, "I AM NOT DRIVING you back up here tomorrow when the thing doesn't work like last time", lol!!!  I was afraid to chance it Vox.  The weird thing is though 3 lamps???  Like it can't be a goof in 3 lamps, or could it?  The thing, all metal, shiny objects aside that worried me was the white fluffy stuff floating in it.  I was afraid that once fired up, hot and flowing it would have clouded the globe.  As much as I wanted that orange/black, I just was not into another disappointment and 1 1/2 drive back up to spencer's 2nite after work.  I think I might have to goo kit an orange/black if I really want one bad enough, or possibly try to order one online from somewhere else.  Funny, Joe seems to have luck with his Spencer's in Pennsylvania.  I'm wondering if my Spencers is ending up putting returned merchandise back on the shelf.  Last time I was there they had none of this color lot.  This was on July 1st.  Now all of a sudden they have 2 and the tubes did look a bit dusty.  Something is definitely going on with this store.  I tried to email Corporate those pics, but it's one of those corporate website forms that doesn't give the option to attach anything so I wrote them and told them that I wanted to send them a formal email with pics, this way I can also cc Susan at LL and let her know what's going on.  Not that it matters much.  If I don't get a return email from corporate I'm going to give them one of my "friendly" phone calls, lol!!!

do you have shots of the caps?

Because I had a problem like that with ONE of my spencers ones (no other ones, and i think it was a black goo one) and told them I would probably be bringing it back. the condensation cleared right out as soon as I ran it. I'm wondering if that sediment is due to super saturation of the liquid with a different type of agent to keep the specific gravity up, or if it's because it got heated up and cooled back down during a quality check. Or if it got heated up and cooled back down during shipping/storage. I would bet these things sit hot in a warehouse and just condensate when the temp rapidly changes.

Either way, I'll check to see if any more of these orange and black ones are around here and in good shape for ya. if one is I'll pick it and sometime when I see ya I'll give it to ya

I would be interested in getting LL's official opinion on it as it makes the lamps look embarrassingly bad.

Time for those projects eh?

Joe, I didn't catch the cap codes.  I should have took a shot of them for LL so they could have at least saw what batch they were from.  Shoot!!!!  I was so pissed about all 3 of those lamps being trash and the only ones that I was interested in, that I totally forgot about cap codes.  I really wanted to show you guys how bad they looked.  I thought last nite that maybe it is something exclusive to the black lava but I bought a 20 oz black/clear and the black lava was jet black with a little bit of a lighter color on top, but you could definitely tell that it was just the two tone of the lava because it was never ran.  This stuff was like snow globe snow!!!  Anyway, if Spencer's does in fact send those back to LL, they will know what codes they are, but sadly I don't think it's gonna matter.

Joe, you don't have to pick that up for me if you don't want to.  I guess I could order one online but I'm too scared that it will look like that I'm not going to bother.  Maybe I can find one on ebay that looks decent.  Shoot maybe i'll just make one!!!

it looks like precipitate and does not necessarily mean the globes are trash.  i've had globes like the before and the "fuzz" mixed with the wax when heated.  if you buy them and they cloud up, have junk in the wax, etc., lava lite will send you new ones at no charge.  it's really a non-issue, especially since you get to keep the bad lamps.

Yes but the new lamps have the same problems so you are in a cycle that never ends.

in my experience it's a crap shoot.  i got sick of dealing with the return process after having LL replace 2 grandes and 2 heritage centuries, so now i just buy USA LL lamps and mathmos if i can find them.  they flow better anyway.

You will almost never get a good (new) lava lamp from anywhere (Spencer's, Target, eBay, etc). I guarantee you will eventually run into one of the following problems:

3) floaties in the liquid

4) wax that sticks around the bottom.

I have purchased about 15 new lava lamps from Lava Lite in the past 2-3 years. I'd say I returned/sold/gave away over 50% of them and of what I kept, out of about 8 lamps, only two have no issues whatsoever.

Here's my short list (of what I can remember):

I'm sure there are some I'm forgetting. I'm officially done. No more new lava lamps from Lava Lite.

Long story short - you're fighting a losing battle. *IF* you can get Lava Lite to send you a replacement lamp, chances are high it will have the same problems.

At the risk of sounding insensitive, I just wouldn't buy these anymore. Period.

Erin, you were the first person I thought of up at Spencer's!!!  I told hubbie, "wait until Erin sees my post"!!  I'm just going to make my own.  I called Susan and told her my son's 52 oz Neon green that I just bought in july has those "seed" looking things in the coil.  She "supposedly" is sending me out a new globe.  At least I can use the one globe to swap out my goo kit lamp that looks like the milky way on a clear night with the old neon green globe.  That's if the new globe is any better.  I don't know what to do with the neon green goo because the gunk from the coil is now showing up in the wax.  I don't even wanna be bothered filtering it truthfully.  I guess I could run it through a pair of pantyhose.  Ain't this some crap we have to go through.  I'm moving to the UK where the lamps are good and plentiful!!!!!  lololol!!!

P.S. Erin, you are def far from insensitive IMO!!!  I walked out of that store and my husband said to me, "Carol, those lamps be really bad because for you to turn around and leave without a lamp, like wow"!!!!

Oh, I did put in my post that I think some of Erin's snow globe fluff ended up in those Spencer's lamps, lol!!!  I had to make a joke I was sooooo heated!!!!

I'm a huge lava nut, but also believe in truthful reviews. I hate to see people waste their money. And I'm tellin' ya... I wouldn't even bother anymore.

Permalink Reply by Tim Gill on September 11, 2014 at 6:53pm
Yea this is beyond a joke about LL and it's disappointing - they have good designs and intentions but there care and quality control just isent there

Permalink Reply by Carol on September 13, 2014 at 9:36am
Now im even afraid to order on ebay!! My 2 lamps i ordered for goo kitting came trashed and really arent worth that!!! Its experiment time!!!