I bought a used Telstar last week, and it came with a gold-metallic bottle. But surprisingly this is not a glitterball bottle with the thick, glycerin-like fluid, but a normal wax bottle with goldmetallic goo.

I didn't know these were ever sold? Only know of an Astro metallic range, I think in red, green and purple.

Anyone know the name under which they were sold?

Before melting, the goo looks like beeswax (a bit brownish honey yellow), with the metallic particles all sunken to the bottom and creating a thin grey layer (not visible on the photo) 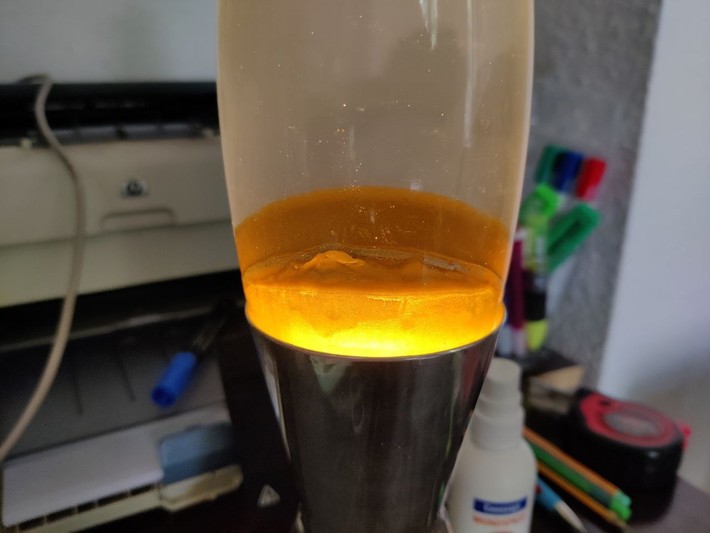 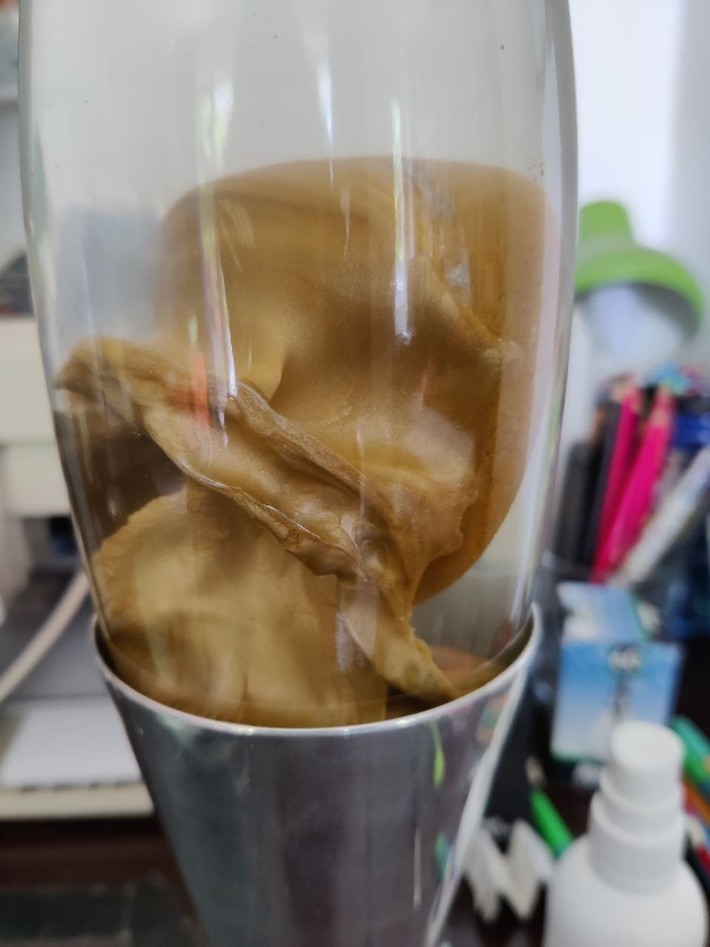 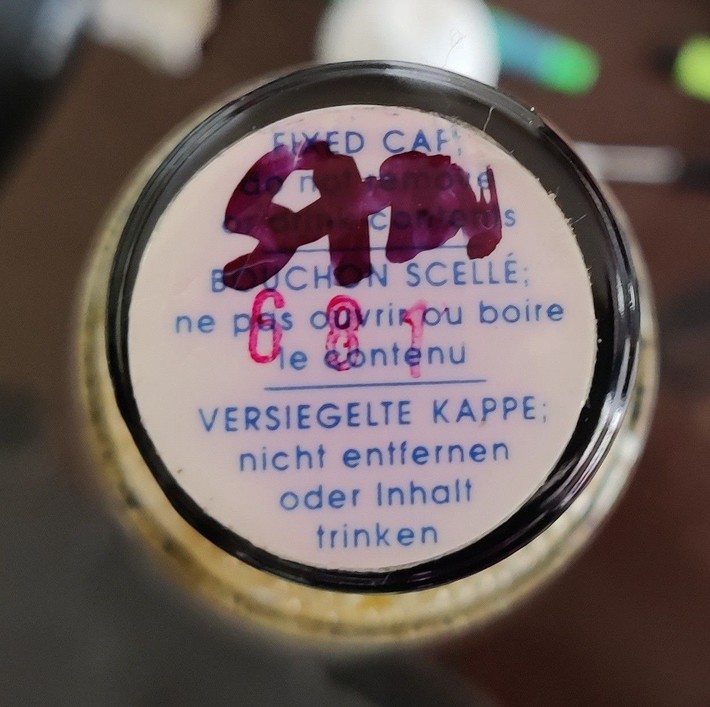 The seller didn't know much, he bought the lamp online three years ago from another seller.


(Sorry, probably not what you wanted to hear, but a good dose of cynicism is definitely required when buying from eBay and the like…)

It's a lovely effect, regardless who actually made the bottle.

I'd be very happy to have that bottle in my Telstar.

I've seen something similar in a metallic silver version that also looked great.

Hello Lampfancy,
the bad fitting to the base in the 3rd & 4th picture is because of a halogen bulb that's used, the bottle actually doesn't sit in the base but stands on the bulb. The first and second pictures were taken with another bulb and the bottle fits perfect.

Nevertheless I'm also very doubtful of the provenience of the bottle. The cap is labelled in English, German and French, so LavaLite is unlikely (as they don't sell to Germany). I have around 35 Astrobaby bottles and there is only one other with a similar label. The rest has labels including a mini Mathmos logo or only showing a pictogram not to drink the content (these are the newer bottles).

I just wrote an Email to Mathmos with a picture of the cap, I hope they can say anything...

(Sorry, probably not what you wanted to hear, but a good dose of cynicism is definitely required when buying from eBay and the like…)

Not to say it’s not an attractive effect of course, just hopefully you didn’t pay over the odds, and on the plus side if it’s a non - Mathmos maybe it won’t suffer the same issues with clouding that their metallics were known for.

I remember a while back there seemed to be a bit of a scam going on where some sellers on eBay were ‘transplanting’ the contents from generic metallics into Mathmos bottles and passing them off as genuine (I was ‘stung’ this way before) The wax in some of the generic lamps had a similar looking effect to that of the later Metallic Astros (As I think you pointed out) so it could be quite difficult to spot.

The fact that there were so many generic metallics also poses the question why Mathmos were so quick to give up on the concept, it had been suggested that they may have been too expensive to produce, but that doesn’t really stack up if the ‘off-brands' were able to make them and sell them at a fraction of the cost  .

Will be interesting to see what Mathmos say…

Exactly. A gold metallic made by mathmos doesnt exist. Metallics were produced in red, green, purple and glitterballs in silver (called glitterball aluminium), green and blue and a few are somewhat turquoise. I think they turned out to be turquoise when the container they used for filling the bottles was almost empty as the turquoise ones also have a lot more glitter bits in the wax. It's not an officially released 4th colour though. There are def. a few prototypes out there like clear wax with glitter and purple fluid which is owned by an  OG member but thats the only one I know of for sure.

So basicly every metallic mathmos lamp other than red, green, purple and silver are 99,9% not genuine.

1) Obviously it's clouding as well, just look at the pictures...cloudy...

2) The reason mathmos didnt try to get the metallics done properly is most likely a few more reasons I think...

my theory is this: Mathmos initially only developed glitterball but as the official pics show they originally made 6 of them. As they are Mathmos they didnt test them for very long before printing the promo booklets and discovered that the ones with a pearlescent look didnt stay like that for very long as the particles dont stay afloat on the surface of the wax, they sink into the wax after a few times running the lamp and that creates the textured metallic look we know from the astro metallics. So they didnt produce the glitterballs as planned instead they slightly altered the density (glitterball and metallic formula are very similar) to make the pearl wax look like the metallics do from the beginning without changing apearence when running them a few times. So basicly the metallics were never planned, they are a coincidental by product....which is why there are no official pictures of them whatsoever. Then after releasing and selling them there beta testers/customers began complaining about clouding, mathmos lost a lot of money due to replacements and discontinued them. Making the metallics properly without clouding, sticking, looking like crap wasnt a matter of tweaking it would have been a whole new developement process which is expensive and success not guaranteed....end of story...they did the same with the smart astro...too quickly developed, too quickly anounced as the ultimate future proof lava wonder super lamp, prototype tested once, then aproved as working great and too quickly and cheaply produced, proper test period outsourced to customers, noticed it's crap while loosing money on replacements, quickly cancelled and never mentioned again...the limitation to 1000 units was just to limit losses while their customers were doing the testing for them....this may sound a bit as if I only wanted to talk mathmos down but I am pretty convinced that this is what really happened there.
Simon Lloyd said:

Hello folks,
nothing from Mathmos yet. The bottle itself is a Crestworth bottle, as it says on the bottom. I payed 50 Euro for a Telstar in good condition and this bottle, so it's really no problem if it's no genuine Mathmos or Crestworth product. I was suspicuious about that from the beginning on...

And Arne is totally right, the clouding is substantial and I have to do something about it, if I want to use the bottle furthermore.

The funny thing is that I bought 4 or 5 NoName metallic lava lamps over the last years and always wanted to do a refill of an Astrobaby bottle with one of them. Sadly all these bottles have clouding issues, even if I bought them new.

You got so much information and knowledge about the topic, would be a phanstastic project!!

Exactly. A gold metallic made by mathmos doesnt exist. Metallics were produced in red, green, purple and glitterballs in silver (called glitterball aluminium), green and blue and a few are somewhat turquoise [...]

Well, there already is a more or less complete history online from a former member who started a new forum as far as I know. I think it doesnt include prototypes/one offs and other developement stuff but the main product range is complete. Also I have no Idea how to make a homepage or so and also dont have the time and many of the pictures I would have to use are not mine and I'd have to ask people all over the place for permission to use them. Many of the things I'm posting here are based on my assumptions and other things are not meant to be posted on things like a brand history and I dont wanne get in trouble like others have...while most of the people on here are nice and honest, there are also some that are not...they have nothing better to do than lurking around waiting if they can get people in trouble by reporting to mathmos etc...and mathmos lawyers arent that friendly which is where my astro rgb comes into play...they would put that project to an end before I have even sold 5 units...if anybody has questions of any kind regarding crestworth/mathmos I'll try to answer as far as I can but I would rather not do anything remotely official and also I'm not doing anymore free work for this brand who lets their customers down lately...As soon as Mathmos is bancrupt this might change though, but for now they can kiss my ... Asstro

If you like you can send me your cloudy bottles and I'll filter them for you and send them back.