Hello everybody, as you know I was recently brought into modship with the intention to make a lava/glitter lamp/wave machine/any glowly light database, as well as a FAQ. Well here it is! You may have noticed me spamming nonsense pages, and if you were really paying attention, you saw a new tab.

From now on, instead of repeating the same old "you need to run your lamp or filter it" line a thousand times, you can now refer them to a page such as this. I want us to be able to point members to our FAQ, so let's do our best to make the FAQ as good as possible.

I started the project with Lamphead a while back in the form of a post, but it quickly became too much of a hassle. Now with the ability to make pages it makes things much easier. This is a combined effort of Erin, Dr. What?!, Lamphead, and myself. However, our knowledge is limited! This is why we need all Oozinggoo members! You will notice a lot of information is missing, such as prices, production dates, colors, or whole lamps. You might also see mistakes. Please post all additions or corrections you would like to make here. The next post will list the most important requests for data, so please check it out.


The old lava keychains started being produced by Basic Fun in 1995,

there were four different series which included (in order)

The Wizards came out in the early 2000s and were available right up until 2003.

The cost of the keychains new were 5.99 and were available in spencers and craft and grocery stores... really anywhere that carried basic fun keychains at the time. I saw them in a few party stores as well.

Permalink Reply by wizard of ooze on July 18, 2011 at 12:21pm
As for the black squiggle aristocrat, a mention could be made about the rarer variation having starlite holes in the base. You may use my pic here if needed. 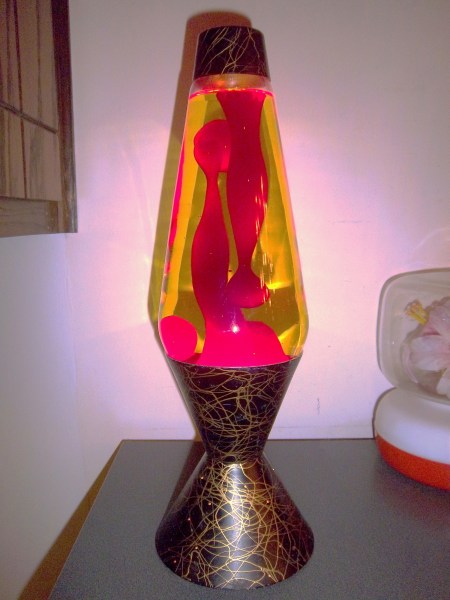 Permalink Reply by Autumn on July 19, 2011 at 10:15am
Flowing photos are best. Any non flowing photos will eventually be replaced with flowing photos when they are found.
Oh, and what is the model name for this lamp?
Chow said:


I just posted a squiggle music box. Do you want one of it flowing? I does have a great flow.

I need a picture.

Autumn, don't forget the executive for the vintage 60s lamps.

Permalink Reply by Autumn on July 19, 2011 at 10:17am
Any and all pics, and information. I plan on using some pics from mathmos' website for now until I find better ones. Right now the problem is I know next to nothing about mathmos, I dont even know when they carried what models.


yep, me too, just tell me what pics you need, got loads

Permalink Reply by Michael on July 19, 2011 at 7:10pm
you could always refer to Anthony's site flowoflava.com... very informative with ample pictures.


Any and all pics, and information. I plan on using some pics from mathmos' website for now until I find better ones. Right now the problem is I know next to nothing about mathmos, I dont even know when they carried what models.


yep, me too, just tell me what pics you need, got loads

More Mathmos Colourways and Lamps.....I have these in my collection.

Permalink Reply by Autumn on July 31, 2011 at 8:56pm
It took me a while, but I added a page(with no info) for the jet and lunar. I also added your colors to the colourway list.


More Mathmos Colourways and Lamps.....I have these in my collection.

Permalink Reply by Dr. WHAT?! on August 2, 2011 at 8:54am
Although I own none of these now but I didn't see any section for vandor lava lamps. Would this be considered Lava World or just  Vandor? or both?

Permalink Reply by Erin on August 2, 2011 at 1:26pm
Just to let everyone know, I'm still working on the 60s and 70s sections, but the formatting is brutal. Ning forums aren't kind at times. :) Jonas has agreed to let us use the info he's collected about Lava Lite and I'm doing my best to get it all published and formatted correctly. :)