Lava sticking to the sides of lamp

Hai everyone! Just want to say this place is awesome, I never expected to find such massed enthusiasm for Lava Lamps!

anyway, I really need help with something.
I love my lamp. I rescued it from being thrown away when it's old owner didn't want it anymore. It took me a long time to find just the right lightbulb for it, but once I had that it worked a treat!

It worked just how I expected a lava lamp to for about a month. Then solid bits of the lava started to build against the side of the glass, even when it had been on for ages! I assumed it would melt off and I kept using the lamp. But slowly the mass of static lava has risen up one side of the lamp. Here are some pictures: 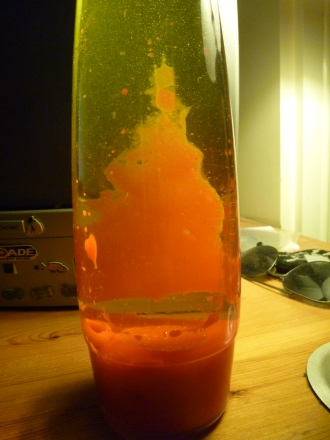 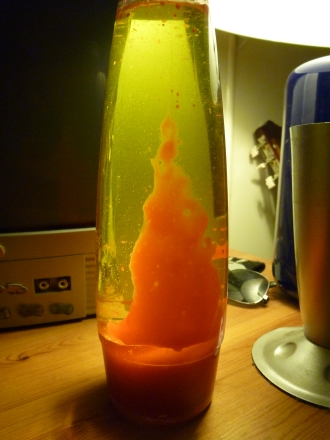 I assumed it would be a simple matter of unscrewing the lid and scrubbing the lava off the glass somehow. Two problems though: 1. I don't have any such tool that could do that and 2. The lid won't come off. 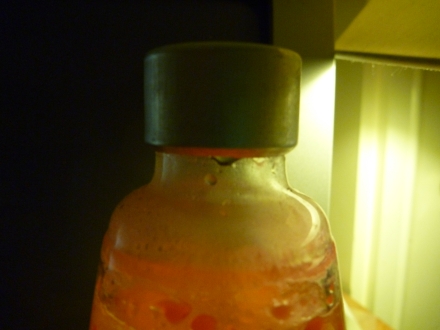 I'm probably being a idiot asking for help when I'm trying to fix a lamp that was due for the bin anyway, but I'll never afford a lamp again and I'd really like to keep this one working. Is there any way I can fix this problem wihout having to take the lid off? I'm hoping for an answer like submerge it in hot water or something..

anyway, any advice would be very very apreciated!!
Thanks everyone!

Well, Liz N Dan, I know when I goo kit and have sticking wax, it is caused by 2 things.  One, the wax overheats and gets really soft causing it to stick (this comes from the guy at Magma Tower) and 2, he says a lack of surfactant which would be your dishsoap.  Sometimes with the dish liquid there is too many other chemicals in it that react with the wax.  Some have tried Bubble soap.  Called Magic Bubbles I do believe.  This is a little more pure then dish liquid.  I never had luck with any of this stuff but again I haven't made my own lava.  I always just use the bought stuff from gookits.com.  If you lava is reacting with your dish soap then it's some sort of a chemical reaction with whatever you made your lava out of.  You can order surfactant from magma tower and try that.  There are more professionals on here then I that maybe can give you come other ideas.