I recently purchased Russian lamp in the attached picture.

I own a few vintage lamps, and thought the glitters were generally a safe bet (usual problems aside)....however, as great as the lamp looks in the picture, it's not working for me :-(

The glitter simply sits on the bottom, and after a few minutes a dozen or so squares will rise slowly. However, you don't get the full effect you see in the picture without a little shake, and then it gradually settles down again.

The seller assured me that it worked, without the need to shake, although it was a 'slow starter' (10-20 minutes). However, I've tried leaving it for up to an hour with no joy.

I've tried a smaller bulb, and this was even worse.

The bottle contains small gold squares, and the liquid appears slightly discoloured in daylight (perhaps a little gold has bled from the squares?). It doesn't have the strong smell that the old Euro lamps have.

Close inspection shows that the bottle has probably been open to the air a few times, as there are a few hair strands floating in it, and it wasn't sealed very well when it arrived (luckily only lost a little), so have sealed the stopper well with some amalgamating tape.

Any advice would be much appreciated, as it looks fantastic when moving.

Out of the blue, received the following message from the seller:

"Hi Mark,I have found out why you are having such trouble with the glitter,
my Husband "bless him" forgot to send the metal washer that fits between the bottle and the base,all our other Russian lamps have these, I have just found it, were we pack stuff for postage. I apologise & I will be sending it to you this morning."

Fingers crossed this will be the answer!

So wondering if my squares will work in fluid from something like this?:

Worst case scenario, we have two members here who do glitter refills - Kirk and Loren. Both have stellar solutions if you don't get the glitter working again. "Stalled" glitter is not a problem we've yet been able to rectify.

Thanks for the reply, that's really helpful.

Searched high and low a few years back, and couldn't find any home grown glitter so that's great news!

Someone off forum recommended trike, so trying that in the 1st place.

One very expensive litre of Trike later, and the glitter just sits on top of the fluid.....less movement than I had in the 1st place lol

The person who recommended the trike sent me an ebay link. However, on close inspection it was for Trichloroethylene as opposed to  trichlorotrifluoroethane....perhaps why it's still not working!!

Google suggests that trichlorotrifluoroethane is actually $649.29 per litre!

I do have the fluid from an old living jewel I could use. However, the fluid has gone a little murky....does anyone know if there's any way of clearing it up?

Here are a couple of pictures of your Russian bottle refilled with my fast glitter liquid, Mark.  It's flowing great on a 40w bulb.  In the second picture, you can see it capped with an American flag bottle cap. 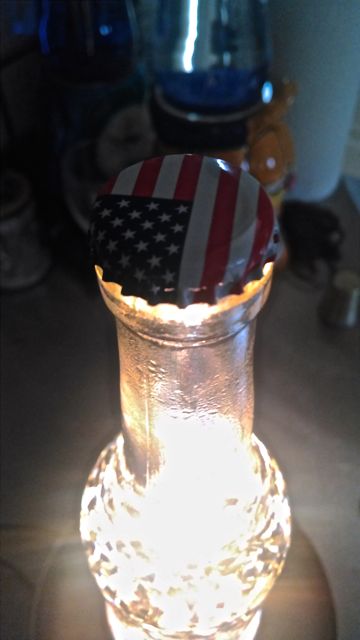 And here is a short video.

Kirk, you're a star....that looks fantastic

Kirks glitter is the best !

I have five lamps filled by him, one of his first public batches,

and they run every day for six hours.  They are the same flow

and color since day one.

As far as 'Trike' or any derivative of that, I would not want to

bottle under pressure and apply heat.  I worked in the lab of

a circuit board maker and we used 1,1,1-trichloroethane, very

nasty stuff.  If it begins with trichloro- I'd stay away ;-)

I'm glad you like it, Mark.  I should have it shipping back to you Monday or Tuesday.  I think you're going to really like the liquid and glitter for your Living Jewel, too.

This weekend is the first time a a few months that I've worked on my lamps and run my lava.  I almost forgot how much I enjoy it!