Mathmos released a new Mathmos Astro with a silver dusted bottle.
Off it will look like completely made out of metal chrome, and switchted on you can see 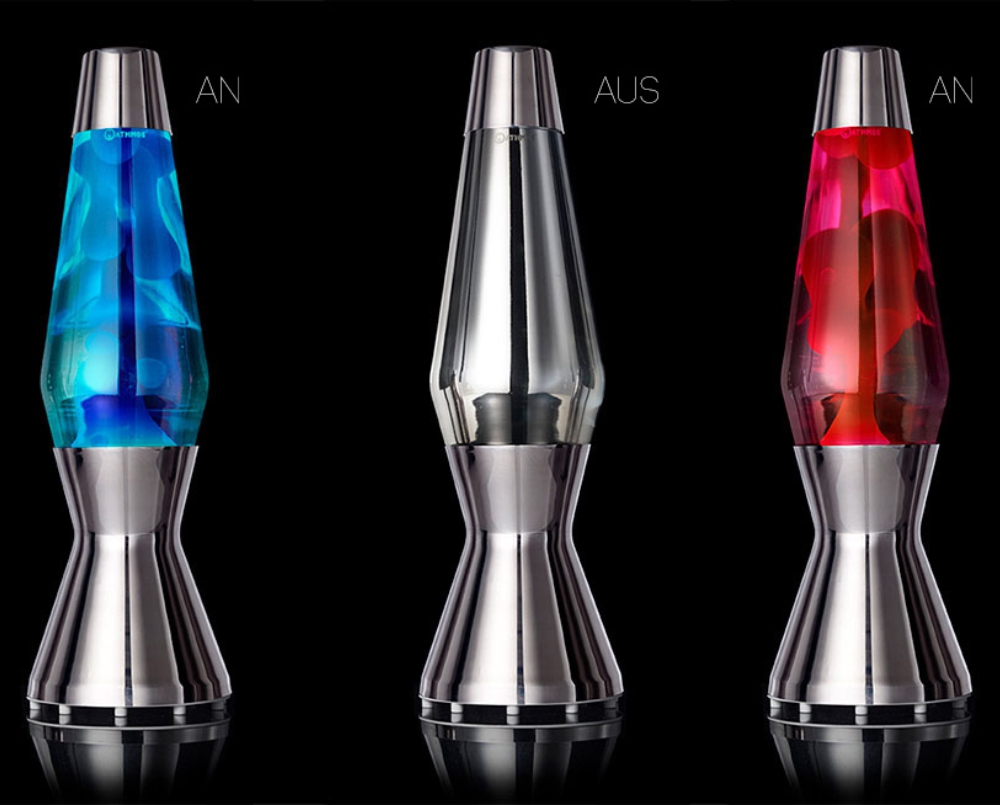 Permalink Reply by Modulo '70 on January 25, 2017 at 3:01am
Anyone else here had light bulb issues with their recent Mathmos purchases?

well for starters, as I did had some issue with late mathmos production (heritage line and chrome astros), I'd be VERY cautious about these ones because, first, a lava lamp is about lava and spraying some painting/coating on or in the bottle seems very, very, very strange to me.

Then second, I've noticed that lately the oil receipe has changed for the worst, making mathmos working as US lava : big blob coming up, splitting in two or three bubbles when sinking and again and again. NOTHING compared to 'old' mathmos where you had the oil going up in some sort of big worm, sometimes making as many bubbles as possible before everything is down.

I think mathmos has lost what made them the number one lava lamp maker : no new combination, no innovation, some changes in the design and the fluidium RIPed, some really questionnable directions like the screws on the neo (who would make holes in the furniture for the lamp to be safe ? Come on...).

I own like 30 mathmos, telstars, astros/babies, 2 fluidium and 2 lunars, all working great besides the late ones (heritage and chrome mathmos which had their composition been changed (as told by a mathmos spoke person) so unless a really big improvement in their line I'll be buying old ones. And only !

They don't even offer fluidium replacement bottles... Get lost mathmos !

Something of a lapsed Mathmos fan here, not having bought any lamps for a number of years. Saddened to hear that quality has apparently taken a dive, a bitter pill to swallow with them being more expensive than ever. I really miss the 'glory days' of the late 90s/ early 00s when there was a surge in new ideas/ products, with the likes of the glitterball, 3 in 1 astro and the fluidium, a major re-imagining of the lava lamp. Nowadays they seem to rely on retro-pastiche rather than innovation, sadly.

i think the formula has been tweaked to start quicker and have noticed that it tends to blob balls compared to what craven walker did and wanted the long stretchy to the top snake like lava.  I dont see the point in two coils either. If im refilling orig bottles i have to dilute slighty the liquid to slow the lava down then can get it back to the old type flow. To me the flow now is just like the china imported blob flow just balls of lava.  Never the less im still a mathmos fan but not the bottle increase price, rotten brexit effect grrrr

What is the quality of the bases like on the newer lamps? I was for a time tempted by the newer Astro with the mirror finished base, but with tales of dubious quality I'm not sure. Disappointed to see that the Astro/ Astrobaby lamps no longer feature the Mathmos logo, which again just seems like cynical cost cutting. Would love to see the return of embossed logos like on the 90s Astros, the Telstar still features an embossed logo, as does the new Neo, so why not the Astro?

The flow on their lamps has really gone down hill, they just produce blobs going up and down. Also the wax is full of air bubbles and has a nasty grainy texture. Very bad.

Do you think it is worth contacting Mathmos to let them know? Do you think they are just going through a bad patch?

I am wondering who is in charge at Mathmos and why not contact them with a list of our concerns to see if they can fix this. It is a real shame.