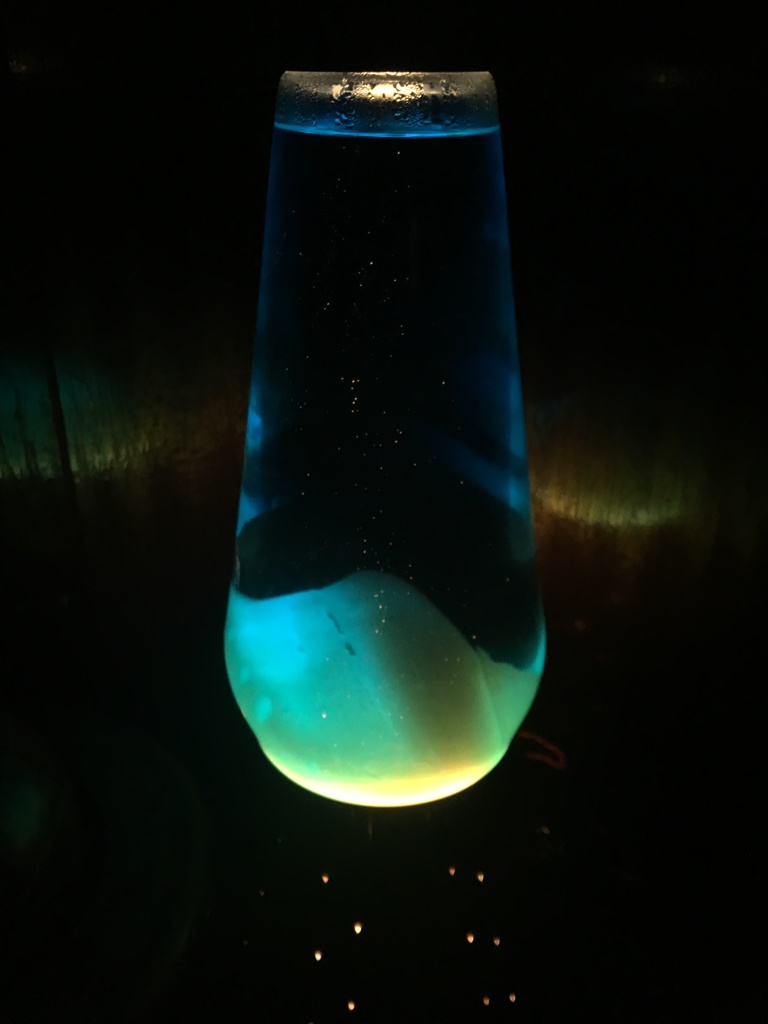 Anybody know what going on here? Lamp had been working great and then the other day I found it like this after it had been running about 10 hours. That's the longest I'd run it in the three weeks I've owned it. Everything I've read online seems to indicate over heating. I turned it off for about 15 hours and tried again and this time turned it off for 18 hours before trying again. This photo was taken after two hours but it looks exactly the same as it has the past couple of days. Thanks for any help.

It all makes sense. No babbling haha. I appreciate you and the other guys weighing in.

I've actually narrowed things down a little. After watching it on the other base I realize it does the exact same thing on both bases (same watt bulbs) in two different locations. 2.5 hours to get going, then after 6 it stops flowing and goes into the frozen state on the bottom. I've also noticed what looks like some slight bubbling at the top before it stops flowing. So this would go with the over heating theory (the pic I attached is actually the lamp in a cold state, which to me looked pretty similar to the lamp in the overheated stage. I took the pic thinking it was the same before I realized it was going to start flowing.)

I guess what was throwing me off was that the other lamps are really getting going around eight hours, and the one time I left them on for ten hours they were just starting to take on some completely different really nice flows that I loved. All the other lamps I've owned would run nicely for eight hours or so.

Maybe the blue lamp is of lower quality (it's 1990 while at least one of my other lamps is from the 70's and I was all least told the third was from the 60's or 70's when I bought it.) Maybe it was run differently over the years. Who knows? But after listening to all the input from you and the other guys it seems that after 6 hours maybe its run it's course (which you actually said is normal for some lamps. I didn't know that) and is starting to warm up too much.

My next step is using a dimmer and adjusting the light intensity and see if that extends the flow. If at worst I have a nice 6 hour lamps I'm ok with that.

Ok, now I feel like I might be beginning to babble! Thanks for indulging me in this problem. I've been reading all these discussion threads and I'm really getting into all these different aspects of these lamps. I never knew.

So I'm not sure of what steps you took with this lamp.  Are the pictures with a different base than the description you gave of the flow stopping after 6 hours?  I ask because the pictures seem to be of wax that hasn't melted.

If that's the case, you have one base that may run cool and one that doesn't.  Actually 6 hours is within a normal maximum run time (6 to 10 maximum), depending on all factors.  Those factors being, is the lamp in a draft (it might run cool), is it in an area with no air movement (it might run hot), is it under a vent (it might run hot in winter and cold in summer), is it ran with other lava lamps by it (the combined heat will effect run time), what is the ambient room temp (70 to 74F is recommended).  That brings us to differences in the lamp bases.  Are the bulbs the same?  Are the bulbs the same distance from the globe? (within 1/8 to 1/4 inch is considered proper.  This would be an unusual problem on a century as the socket components and bulb size and shape is generaly consistent)  These are just some things to consider when trying to determine why a lamp runs hot, or even cool.  That's one reason why dimmers are recommended, they allow fine tuning for the spot where you want you lamp.

I hope this makes sense.  I feel like I might be beginning to babble a little, lol

I have noticed very different run times and lava activity dependin on where in my living room I use my lamps. Some got hot very quick and some can run longer than they are supposed to.

Just the nature of the beast!