it is advised on this board to use pyrex/tempered glass for globe.

Lunar bottle are regular glass, and I saw a picture here of a broken bottle here which looks also as  a regular glass:

(when broken, I assume pyrex or tempered glass separe in a multitude of small cubes, not the case here)

So, is there anyone here who actually saw a pyrex bottle on commercial lavalamps?

I heard recently that the lunar bottle was a whiskey bottle, and most beverage bottle are tempered glass. Lava globes are tempered as well and if LL were to use Pyrex globes the cost of the lamp would be outrageous. I've bought Pyrex lab glass and it was pricey for just a standard bottle.

I called Mathmos not so long ago, and they said indeed Lunar Bottle are Whisky bottles, and they're not tempered but regular glass.

gotcha, I thought a lot of liquor bottles are tempered, who can tell the difference glass looks like glass lol. Are you looking to replace that busted globe?

Yes I will buy a whisky bottle to replace my Lunar, but I've also other things in mind, and pyrex sounds really expensive.

So if normal glass can do, it's good.

I did this one with the pyrex lab glass, it's a 3000ml round flask cost about $60 used. Newer stuff and larger flasks usually cost some seriously $ so for a Lunar I can imagine it being very high. 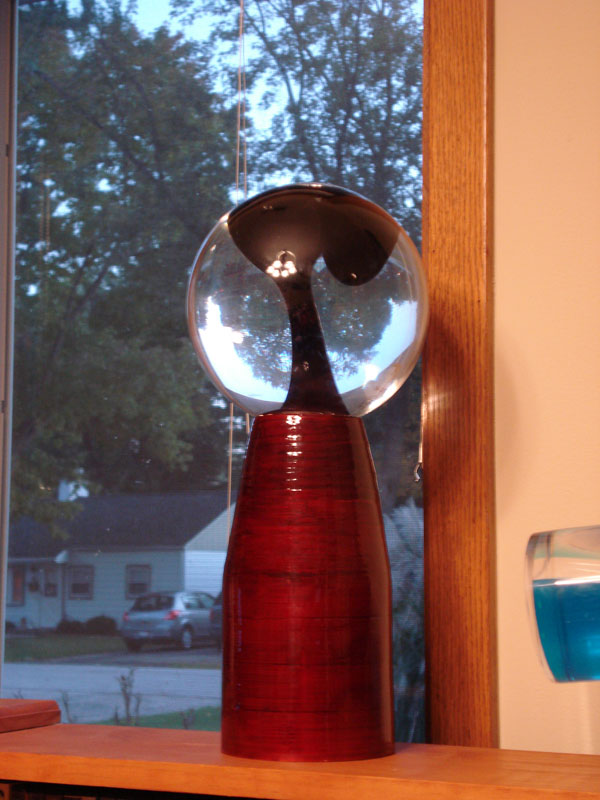 I do have a spare Lunar bottle....red violet...only thing is, the cap is missing, but can be ordered at mathmos for like 3 euros or so. I would be willing to part with it. Its used 10 times max and I'd be ok with 50%of the originla price which is 95 euros.

Give it a thought.

The glass for Mathmos lamps is tempered in some way it may not be exactly pirax or lab glass as such but it is tempered. When they fill the bottles with wax they are put into very hot water to see if they can take it so in order for them to survive they must be tempered or resistant in some way (I can't say for other lava companies).

I think the reason why pirax and lab glass is expensive is because it contains silica which makes them very heat resistant.

Well, when I broke my lunar bottle it broke in normal way, not like tempered glass.

As I said before: Mathmos told me it was not tempered glass.

Call them if you don't believe me.

The glass for Mathmos lamps is tempered in some way it may not be exactly pirax or lab glass as such but it is tempered.

I've got no opinion, I just repeat what Mathmos told me on the phone: Lunar bottles are NORMAL GLASS.

Period. I don't get why some of you don't want to believe me.

The original question of this post was : is there anyone here who actually saw a pyrex bottle on commercial lavalamps?

I think you try to ask us so long until we agree in your opinion ;)

Pyrex glass is used on some commercially available lamps but it is rare. Magma Towers uses all Pyrex cylinders on their lamps as does Mathmos on the Monsters. If your going big you better go Pyrex.

The main thing to remember is that lava lamp bottles are made for lava lamps ( besides a few i.e. Lunar). They are designed extra thick and can take the heat no problem. Most regular whiskey bottles should be able to take the heat without issue also. The area people run into problems is when they think they are going to fill a big flower vase cylinder only to find out it will crack.

Use your best judgement when picking a new bottle/cylinder, I have a Coke bottle and a few odd bottles that I made into a lamp with no problems.

I think I can clarify a few things here.

Soda-lime glass is the glass used in everyday items like windows and wine bottles and classic lava lamps. It's cheap, easy to work, and reasonably durable.

"Pyrex" is a brand-name usually associated with borosilicate glass, which has boron added to make it extra heat- and chemical-resistant. It's more expensive and usually found in cookware and laboratory glassware where large temperature changes are expected. Things get confusing when referring to Pyrex though, since Pyrex also makes a lot of consumer products, bakeware and such, using with tempered soda-lime glass (see below).

Quartz glass is basically melted and purified quartz sand. It's hard and strong, extremely heat-resistant, and VERY expensive. It's mostly used in applications where very high temperatures (in the 1000+ degree F range) are to be expected.

"Tempered" or "hardened" glass is ANY type of glass that has undergone a special heating-and-cooling process to create stress inside its crystal structure, making it particularly tough, but also susceptible to shattering into a million tiny pieces rather than breaking into razor-sharp shards. Tempered glass is mostly used in cars and big windows and cheap glass bakeware, due to its durability and safety.

So there you have it... Lava lamp bottles are made with extra-thick soda-lime glass, because it's cheap and cracking isn't a big problem in such small objects. Magma Towers are made with borosilicate (Pyrex) glass tubes because like Marcel said, in such a large object, thermal stress between the hot bottom and relatively cool top becomes an issue for regular soda-lime glass. They don't use tempered glass in lava lamps because in smaller bottles it's unnecessary, and in large containers borosilicate glass is more cost-effective.

Thanks for this perfect answer :-)