These are my 3rd and 4th Mathmos products. I currently own a Mathmos Jet and 2011 Mathmos Astrobaby both of which are beautiful. Both have also been re-wired for US use by me.

Both items came well-packed and you can tell that Mathmos does a good job with marketing and presentation. Even the box is exciting (actual pictures instead of photo renderings).

Here is a picture of them both right out of their boxes. You can see that the pink one is a little hazy. My turquoise Astrobaby looks like this when not running, too. No big deal; it clears up when running. 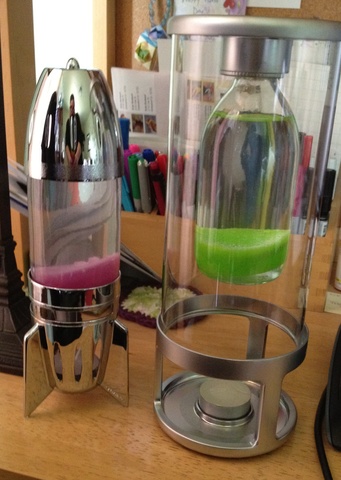 Both lamps came with a little tealight candle. The quality of materials was impressive. Both models are very sturdy and well-built. They are weighty and look and feel like very quality items. I was very impressed with the quality of the stands of both models - more so with the O1. Such a nice change from the cheap crap Lava Lite produces. Both lamps are really nice to look at, even in their non-flowing state. The globes are all the same size, so you can swap out between models.

The R1 has tiny little rubber feet on the bottom, which is a nice addition. The R1 is composed of the base, a ring that the globe sits on and the top piece. I got the one with the chrome finish. The chrome finish is really well done and the Mathmos brand is stamped on one of the legs. The finish is of high quality and looks really nice. The pink color I ordered was not what I expected and does not resemble the item you see in the photos. In all the product shots I've seen, the pink is a deep, rich pink, almost magenta and very vibrant. The one I received is much paler and lighter. Far less vibrant. I have to admit, I don't care for this pink color.

The O1 has the bottom part, the cylindrical glass and a top metal piece that holds the globe. I was pleasantly surprised to learn that the bottle is securely held into top by a screw-type collar. I initially thought it just slid in there. The finish on the O1 is matte silver and is very well done. The glass cylinder is a little thinner than I would have liked. The clear/green globe is as expected and looks like all the other clear/green Fireflows I've seen.

I lit both at the same time. Within 20 mins. the R1 was moving about. The O1 was melting, but not flowing. You really have to make sure there are no drafts/fans/air movement in the room; if you see your candle's flame flickering, you're going to have flow problems. They are very touchy lamps. The O1 is hard to get flowing and I tried several setup and sometimes option 1 worked and then another night, no. Sometimes the R1 would just stop flowing altogether for no reason and one time, it overheated and detached from the coil entirely.

I think both models, but especially the O1, would benefit from having some sort of covering all the way around where the candle sits. The flame needs to remain undisturbed in order for the lava to flow. If you see that flame moving at all, the flow will stop. Of course the lamps need ventilation, too, but having the flame not enclosed means it's very susceptible to drafts. There were a few times where my R1 would stop flowing because of air movement in the room. And, I initially could not get the O1 to even flow until I put a separate candle holder around the tealight. I feel the O1 has way too much open space at the bottom. Even with a candle holder around it, it still sometimes struggles to flow.
Another little thing I didn't care for - the exposed coil on the O1. It could be a little smaller so it doesn't sit up so high. Kind-of diminished the classy look of the lamp when you can see the coil running through the wax.

Overall, I like the lamps, but it will be challenge for me where to place them since during spring and summer, we run fans and air conditioning (one or the other) nearly all the time in almost every room in the house. You'll definitely want to take that into consideration before purchase. The R1 has a more protected base and it less likely to have flow issues.

At this point, I would only recommend purchasing the R1 (the rocket one). It's less susceptible to flow issues. So far, after three runs, the O1 only flows about 25% of the time.

Any opinions or questions are welcome! 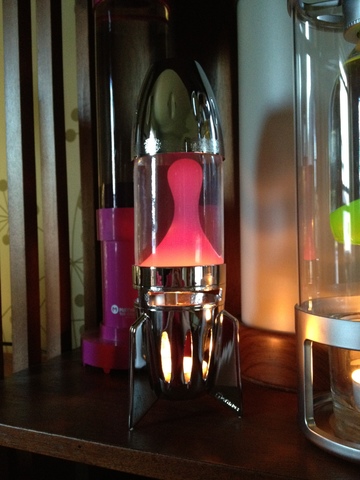 What I see most of the time with the O1:

Well, the pink one (R1) has detached from the coil again. 2nd time it's done this (looks like it's overheating). O1, despite being moved to the kitchen where there are no fans running, still won't flow. 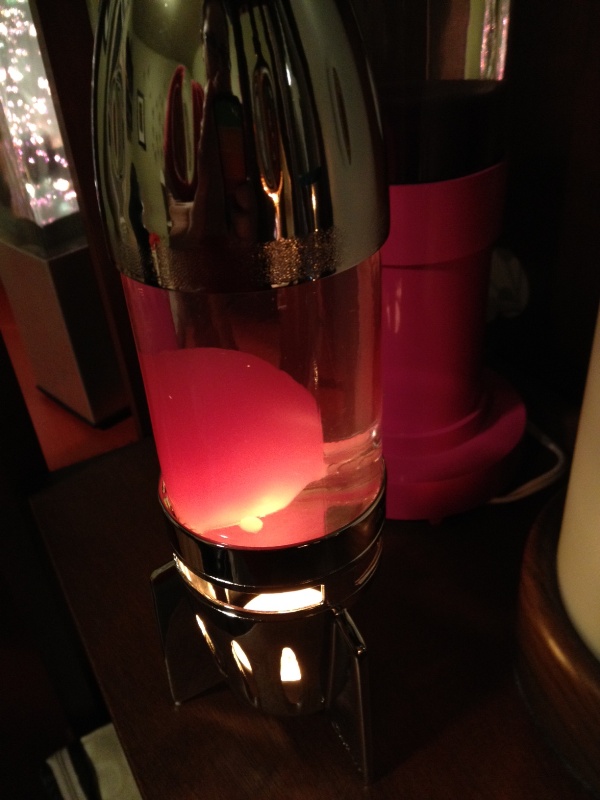 You recommend the R1, but it seems to have its own set of problems. I think I will pass on the fireflows all together. If it was me in your situation I would have just returned them.

For now, I am content to keep them. I'm going to try them in a few different areas. I'll post back what I find out.

Don't pass on the Fireflow.

I bought 3, and they're great. (Well I only got 2 now, because I've some issues with a shop, not cleared yet).

The lava is one of the best, nearly like a jelly, you want to eat it!

Flow is perfect. They're so cute!

Erin, about the coil, I had one like this.

I carefully moved the bottle while it was hot, to seat the coil on the bottom of the bottle.

Now it is perfectly centered. Give it a try...

Astralav, have yours ever disconnected from the coil?

Thanks for the tip, I'll try that tonight.

No, but some part of the coil wasn't seated at the bottom and I cured it on the first run, so maybe it's the reason of your problem.

Be cautious and take your time.

I purchased  the R1 about the time you did. Im sure i benifited from your work on getting it from mathmos us. I found that the tea candle they supplied with it was just too short and had no ooomph to it. So i put in a little taller tea candle maybe a half inch taller and now it flows beautifully! No problems whatsoever!!!

Thank you for your advice! The R1 I actually have problems with overheating. It's the O1 that seems hard to get moving, even with a candle holder around the tealight.

How many did you get of the R1?

Also, what is the temp inside your house? Ours has been about 76 when I have the lamps lit.

House is around 70, I have no problems of it overheating at all.The tea candle i put in has a little plastic casing around it. Ive use it about 6 times,,, works just great!

Finally had a chance to run these in my room with no windows open and no fans moving. They worked perfectly. The R1 does run hotter however. Just thought I'd post an update. :)