Hello all,
This is my first post, so I apologize if any of this is super obvious, and I just missed it. 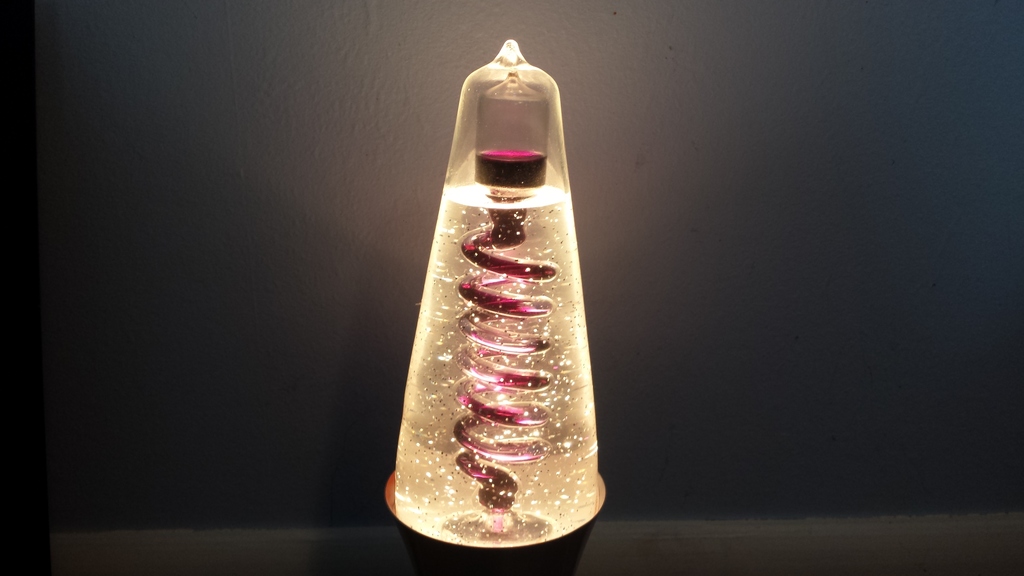 I recently picked up this globe at a thrift store for $8, and It's pretty awesome. I want to spruce it up though.

I'd love to be able to drill into the side, take out the glitter water, and put in lava instead. I know making your own lava is very difficult, but could you take a different lava lamp, and steal those insides and put them in this one?

I have experience drilling glass, but that's about it.

Instead of a spring at the bottom (Wouldn't be able to slip it over the coil) something like ball bearings or buckshot could be used, I'm guessing at least. Ideally the hole could be made underneath where the globe sits on the base so you wouldn't see it, but I'm not sure how I would seal it, since it would be exposed to a lot of light, heat, and lava. I really like the way the top looks, but if I had to, I could drill in the top and put a cap over it or something.
It might also just be too cool to risk breaking.

Let me know your thoughts on upgrading it, or if you have any clue where it might have come from, it honestly looks like a glassblower just had some free time and an idea, or if you're just curious and want a picture from a different angle or something!

Here's a video of it in action and a bunch of pictures. 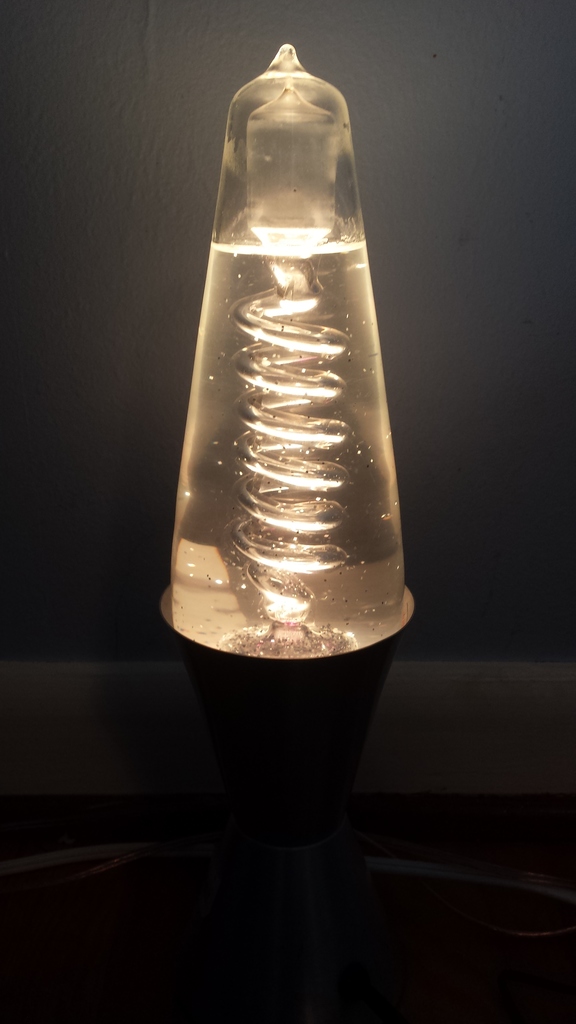 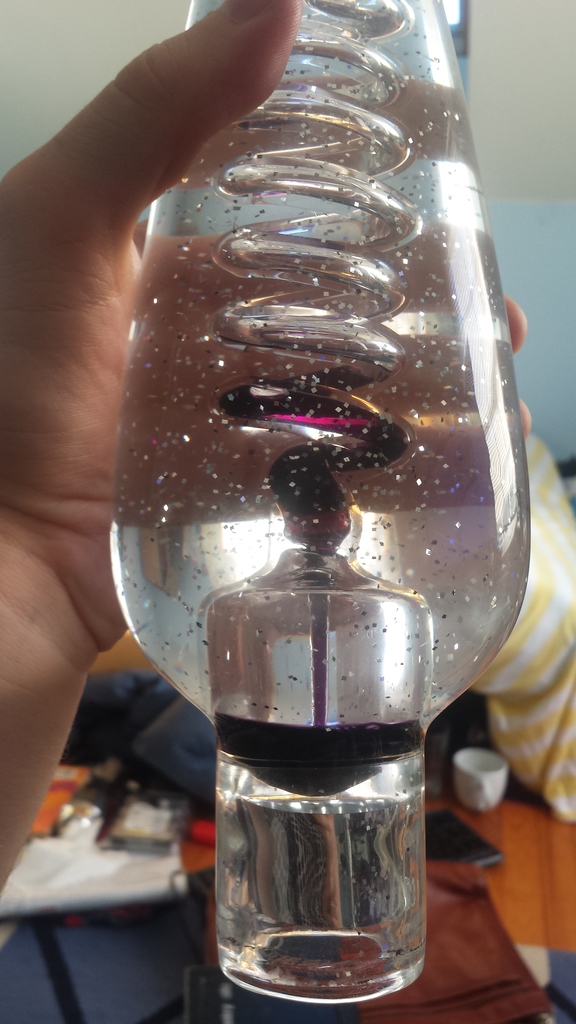 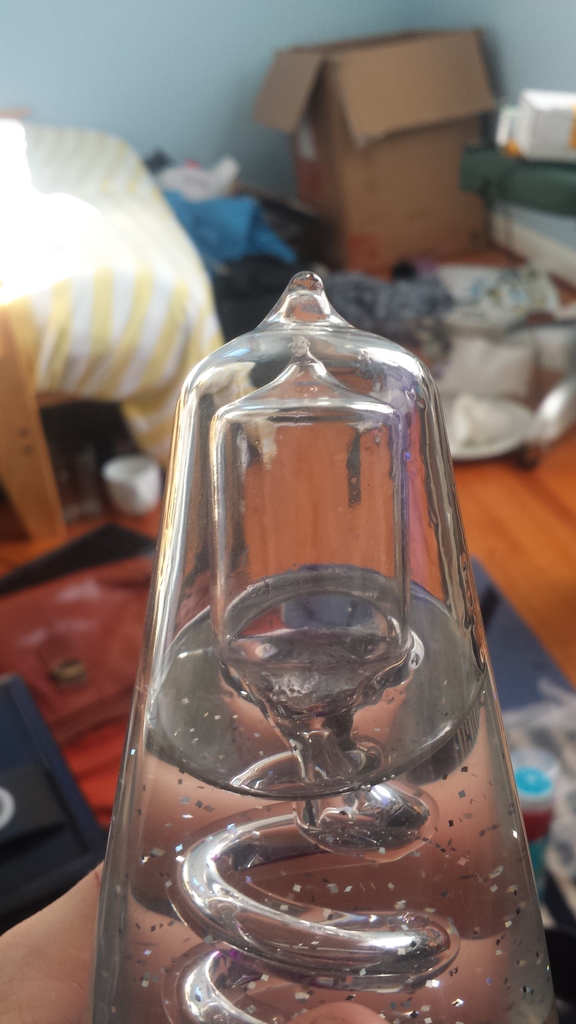 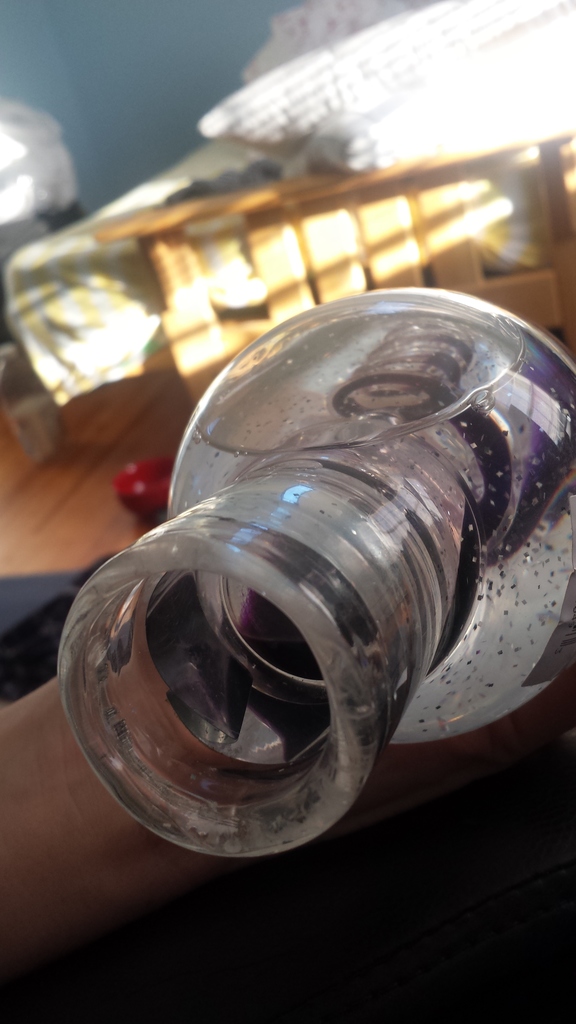 These pop up every once in a while and yours looks to be in fine shape.  One thing people say is how fragile they are, they don't ship very well.  So can it be done?  I don't know.  The risk of breakage is on the high side and you may never be able to replace it.

And welcome to Oozing Goo!!

I finally found out what they're called!
Geyser lamps, or boiler lamps (but not the french kind).
They do apparently break a lot. Hopefully that means there are some bases out there missing their globes, and I can pick up a proper base for it, inside of this ill fitting normal one. Or in other words, does anyone have a geyser base they are looking to get rid of?

Apparently someone called "Bohdan" replaced his glitter water with pink glitter water, so it is doable to at least replace the water, turning it into a real lava lamp is another question altogether though. Bohdan's account seems to not exist anymore, but he is on another lava lamp site.

It apparently takes a 15w bulb. The 40w in my base is probably much to much for it. I did remove the little plastic mirror thing before it melted thankfully.

Thanks for the info, Keith!

Yup its a geyser lamp.  Spencers sold them somewhere in the 2000's.  I have one w/ blue liquid.  The base is quite different than a lava base actually, and it does take a 15 watt tubular bulb.  Looks like a microwave oven bulb.  That bottom part of the lamp where that mirror strip is actually fits right down over the bulb when it sits on its regular base.  Surprised it works on a lava base...I guess b/c the wattage is high enough to still heat it up without the bulb being up in that little cup.  I'd be afraid of it cracking though w/ that much heat...especially with it sitting right on the bulb.

Loads of these broke just in shipment to stores. There were two sizes; the large ones had silver metal bases, smaller had black or translucent blue plastic. Both came in three shapes: conical like yours, bulging, or an hourglass shape. Quite uncommon.

I believe Bohdan used a Dremel to file off the top point, then epoxied a cap on there. Kind of a messy method. Like the French lamps they're patterned after, they're actually sealed. If it were mine, I would leave it be and figure out a base; it originally used no more than a 15-watt bulb.

I have one that survived shipping from member Autumn: http://oozinggoo.ning.com/photo/geyser-lamp-or-boiler-lamp?context=...

I love mine, but mine has "fluff" in the liquid - likely dissolved glitter. I'd keep yours as-is, as these are rare and opening one up could ruin it entirely.

Mine looks just like Erin's...and also developed the fluff.  But I figure there is no way to fix the fluff and I don't want to try opening the lamp and ruining it.  Besides the boiling action is the main attraction and the reason I bought it anyways...I don't really care about the glitter.