Taking a Grande Plunge, or Jumping Off a Cliff? Not sure which at this point...

Hey yall-look what I've found in the local Craig's List: 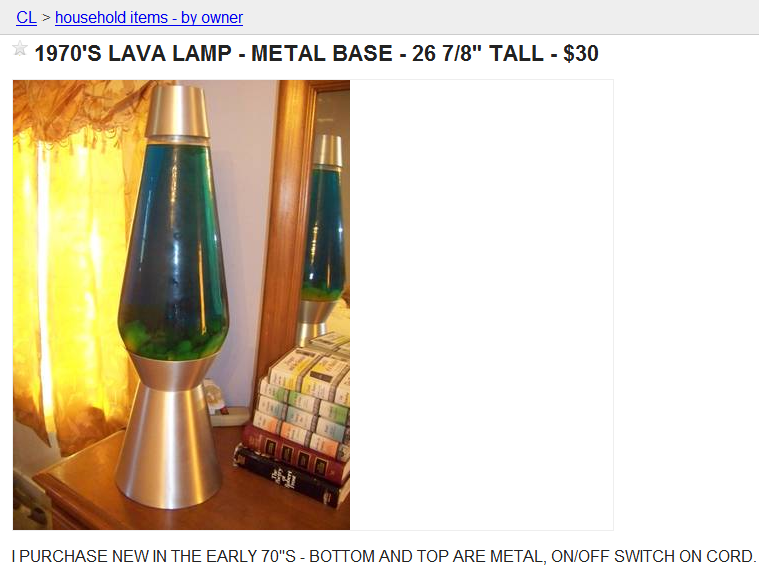 I'm planning to go this Saturday and get the lamp.  But the Lava Library says Grandes were first produced in the 90's.  So, is this seller mistaken about buying it in the early 70's?  I don't have a cap code, or really any info at this point beyond this one photo.  Still seems like a good deal to get, but what do y'all think? And now I'm thinking of bulbs-which ones will work, and where to get them at the best price.  I do have plenty of dimmers, if needed.  Please chime in if you are able to advise me! Thanks!

If its silver its a grande. Seller is dishonest or ignorant. Either way $30 is a good deal.

i got a couple of 100w bulbs from ebay for a good price.  amazon also carries them.

Thanks for the replies, y'all!  I am going to get the lamp, as long as it lights up and looks decent in person...

Go for it, Jus.  I got mine off Craigslist and paid 50 for it, delivered.  The seller should have a better memory than that.   Big difference between the 70's and 2000's.  Still a great price though.

I got the lamp.  It was only a bit cloudy, but the wax had lots of brown-colored debris in it.  So, I decided to do the overhaul but had big trouble getting the top off.  Neither my boyfriend or I could slip even the thinnest of blades under the cap to begin loosening the seal.  So, out came the power tools!  It worked great and since I've stopped permanently sealing my globes (so I can easily change them someday) I wasn't worried about the metal. 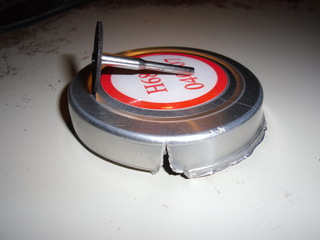 I poured off the blue fluid, melted the wax, and poured the wax through a double-layer of pantyhose.  The hose did a great job of filtering out that nasty brown stuff.  I think coil corrosion is what causes that stuff, but this is the 2nd lamp I've filtered the wax on, and both times the coils looked perfect once cleaned off.  Time will tell as to the brown gak returning, but for now it is trapped and slated for the garbage can. Yay! 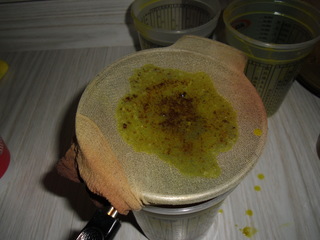 I've stopped using Dawn dishsoap as a surfactant, because after awhile it causes a film on the inside glass surface, which of course makes the lamp look cloudy.  Now I jus use kid's bubble solution at a rate of 10ml. per quart.

I don't have the patience to do the re-do by "the book", so I jus fill the clean globe with hot water & bubble solution, drop in the spring, and pour the liquid wax (through the funnel and long plastic tube from goo kits) straight into the hot water.  This works great for me.  It does result in some bubbles in the wax, but they quickly work themselves out-and I really like the fact that the lamp becomes functional in minutes, not hours.  Since I didn't have a proper bulb, I added quite a bit of Epsom salt which has allowed the lamp to function with a plain old 100 watt light bulb.

Here's my 1st grande, all finished for now lol : 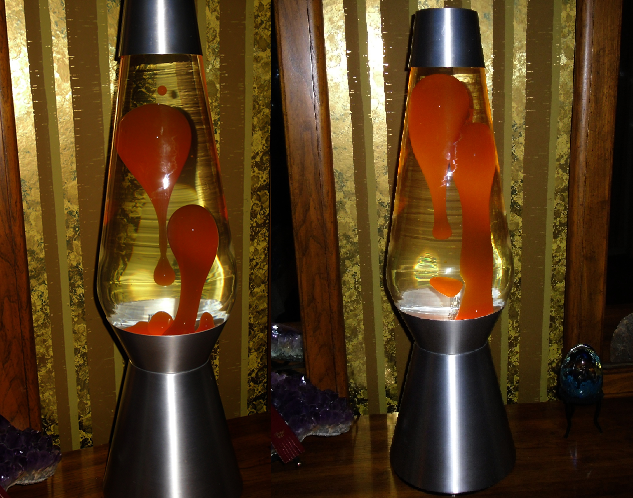 PS-I didn't bat an eye when the seller told me she bought the lamp when she was 16 in the 70's, didn't have the heart to correct her...

Yay, Jus!!!  What a difference, just beautiful!   Thanks for the step by step, I need to re-do my Grande, and the pantyhose filter is an idea I'll remember, mine has some brown gunk in the wax. UGH    How did you get the lovely orange color?   I'm going back and forth on doing what you did, or just re-filling with glitter.  I hate decisions......  ;-))   Good on you, girly!!

Permalink Reply by Christian on October 15, 2013 at 4:35pm
Wow Jus, that looks fantastic! Extremely clear and a perfect orange wax! I like this colour so much.

Thanks ya'll, and you're welcome Marley's Ghost.  I didn't do a thing to change the wax color, that's just the way it is.  I figured it was maybe old or got kinda fried over the years?  I don't know why it's that color!

Well, the color change, without your help, is a mystery!  LOL  Mine's the same color as yours was in the beginning, so maybe it will change to that beautiful orange too!!  ;-))