Hi all- I haven't forgot about this, I have just been busy with work.  But, I was laying awake last night thinking about this project, and something popped into my head- I have been testing all my formulas on a 25 watt base, and typically the formula we're trying to crack was on a 40 watt base.

Since I have no 32oz or similar empty globes to test with, I'm stuck testing on 25 watt only for the time being.  But my thought was- what would oldschool formula- MEANT for 40 watts- do on a 25 watt base?  Would it behave in a similar way as my homemade formulas?  Is this a meaningful variable I hadn't considered? 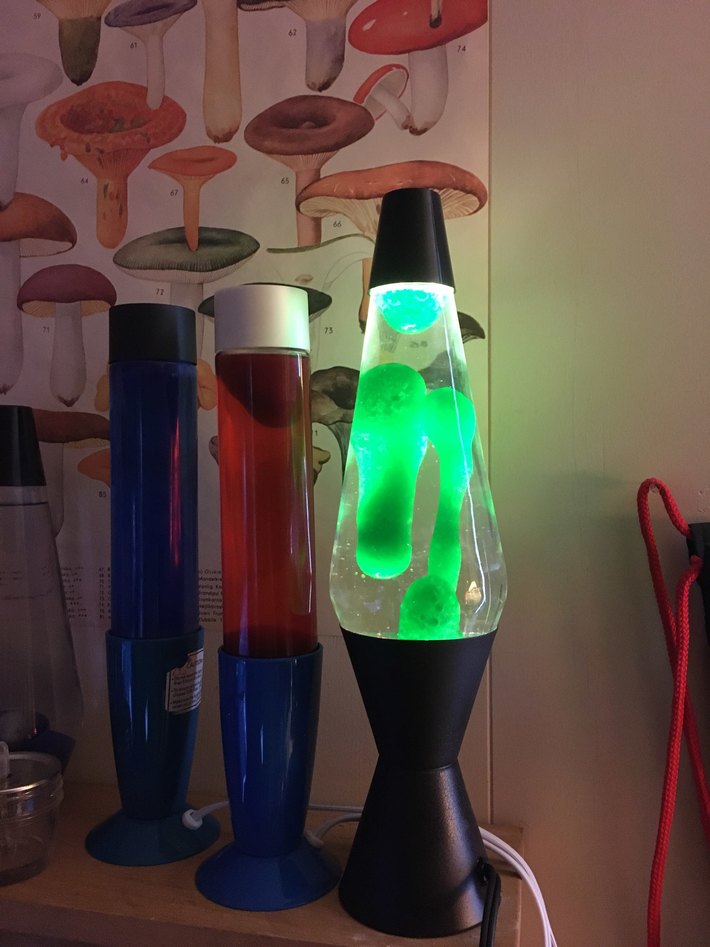 So THAT is interesting.  I may be a lot closer than I think, and my re-liquification would go swimmingly on a 40 watt base.  If y'all are playing along at home, try one of the formulas in this thread (including the MDS paper that Tev provided) and see what happens on a 40 watt base?

I've also been investigating different solid pigments for the wax- based on the leads provided in this thread.  I searched for "powdered crayon pigment" and things like that, and landed on a few providers on Alibaba.  So I have some sample requests in, and we will see how that pans out. 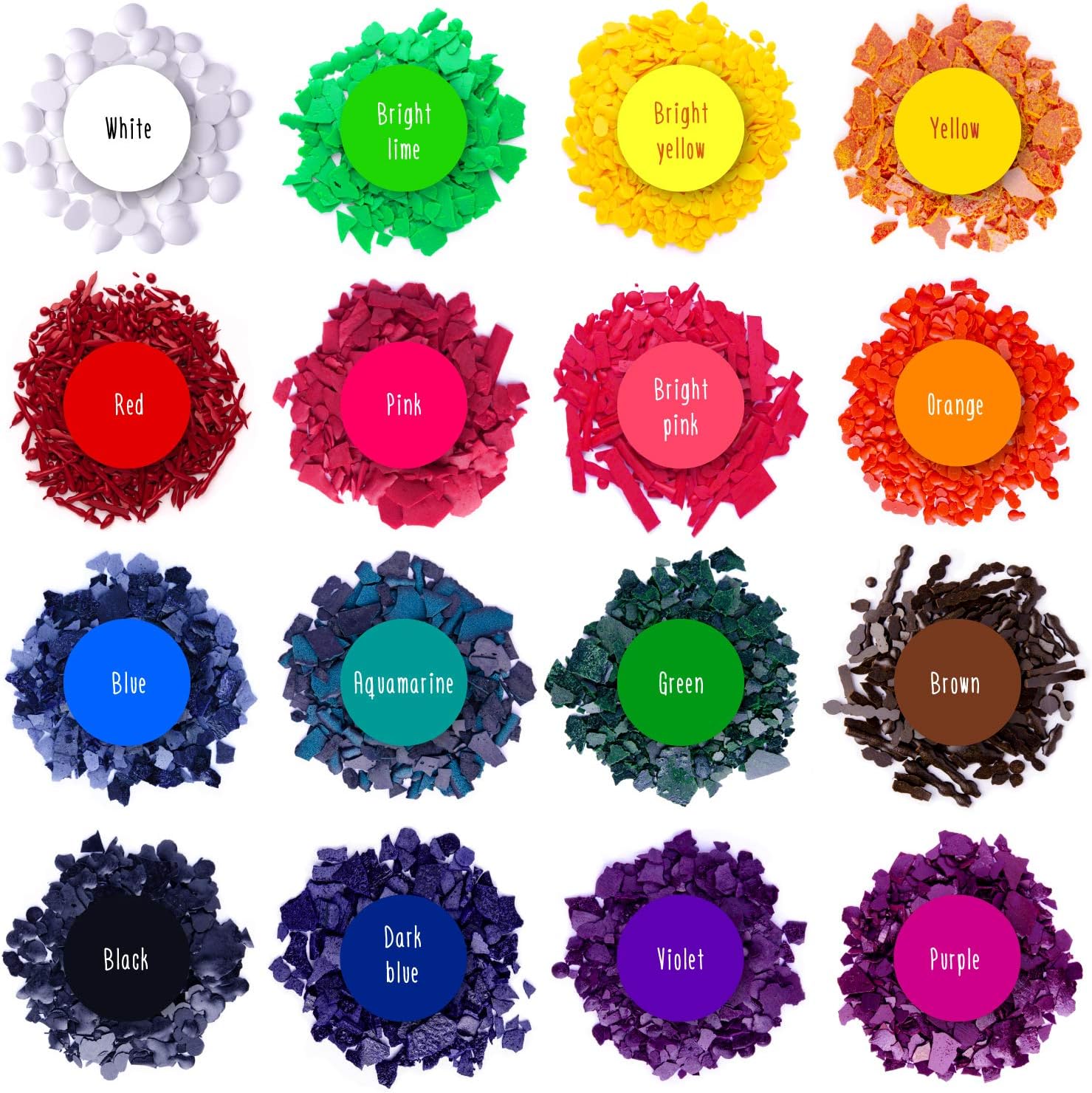 I  don't have that exact brand, but I do have a few chunks similar to that from a candle supply chain in TX.

The results (that I haven't posted here, just stuff I did before) are mixed.  Some provide a nice opacity, but there's chunks of... stuff... floating in the wax afterwards, and some of it clouds the liquid.

I am hoping for a very chemically pure powder.

Here is something interesting I found on the old OG forums. If you aren't aware there was a forum before this ning site and a former Lava Lite employee was answering some questions. Found one related to the formula. Looks like nailing down the chemistry behind each components impact on flow should give you a process to make a lamp of any size. This would be the "magic" he is talking about and there is no one true formula, but a set of formulas for different circumstances.

Hey doc, I have a question.

When did lavaworld switch formula's from the perc type to the more non toxic soapy water type?

Does it coincide with when they switched from screw on caps to the bottle caps?

What triggered the change?

Actually the truth is the formula is changed almost every year. The best analogy I can make is that when Lava's were made here in The USA. The formula went thru a constant process of change.

Significant change. Every color bottle size etc. required a formula change. While some of the basic's don't change many of the specfic gravity parts had to be altered from batch to batch. "The magic" of the product was how well
it ran despite all these alterations.

Get one little element wrong and you end up with a cloudy blob that won't move. As for what CHINA is doing it appears they have yet to achive that same "magic" status.

Frankly the team I worked with never thought "out sourcing" Lava made any sense. We employed 200 people here in the USA while parts were outsourced the "magic" part of Lava was done here.

We always maintained the contents of Lava had to be NON-TOXIC and safe.

For the record let me state that HOME BREWED Lava lamps are a VERY BAD IDEA. I know it's fun to tinker with the chemistry but frankly even pro's could put together something harmful.

>Interesting anecdotes.
>
>I had always figured each batch
>had to be adjusted. (which
>must have taken many hours).

Sometimes it took days to get all the parts right.

>There seemed to be a time
>when they switched from one
>fluid base to another, as
>I've noticed differences in fluid/lava
>behaviour.
>
>For example, I noticed the
>older lamps are much more
>fragile and sensitve to bumping.
>Where as the newer lamps
>can be picked up and
>moved (carefully) without too much
>trouble.
>
>The differences I could tell were,
>
> one is perc based (or
>at least smells it) the
>other is not.
>In fact the recent ones just
>smell and feel like soapy
>water. (yes I admit I
>had to open a few).

One area we always strived for was the reliable flow of the Lava. The key was to keep the chemistry consistent in terms of performance.

The soapy issue was related mostly to keeping the water clear. Some batches had more than others.

We tested a Lava that had no warm up time. In other words a Lava that was not solid while cold. Just turn on the lamp and it would work.

It was shelved due to problems with transport but it was pretty kewl!

I for one thought plastic would really allow us to play with shapes.

Wow... you keep comin with these heavy hitting nuggets of info.  GREAT stuff.

So it's very well possible that we may hit on a "magic" formula here that matches none of what was actually used- but if it works it works.

What stuck with me is:  "Every bottle size, etc".  I never would have thought that they used a different wax recipe for different bottle sizes, but it makes total sense to me.  That kinda is what I was thinking with the 25 vs 40 watt experiment, and now I *really* think I need to find a suitable empty 32oz globe to play with.

I did some thinking before I went to bed last night.

I think maybe the reason the wax in current china made lava lamps is so spherical and has a boring flow is because the lack of petroleum jelly. The problem with petroleum jelly is it is very buoyant. It has a very low density. The only way to balance that out is to add a very dense chemical that can dissolve into wax and create a solution and not an emulsion. I am wondering if maybe most chemicals that can form a solution with paraffin wax and is denser than the wax itself is either very expensive or toxic. I'm not a chemist, but usually chemicals with similar properties have similar impacts on the environment and our health. That's why it can be so difficult to find replacement chemicals. 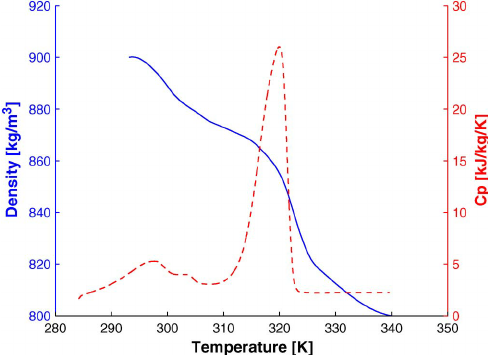 So I think here is the trick. If we had a formula to calculate the specific density of a solution that would make it easy to begin testing with different formulas. The key to a lamps ability to flow is paraffin wax becoming less dense at it heats up. As long as the water is within the range it will flow. How it flows depends on the composition of the wax. Is anyone good at writing equations like this? I don't know how to do this, but I write basic equations on things like Google Sheets/Excel. That allows me to drop in numbers and have it automatically spit out results. If someone could help with this I think it would get us closer to figuring out a working formula.

Oh and they probably stopped using kerosene because it is volatile and would off gas over time. That is probably why the earliest lamps that used it developed issues over time. I have a suspicion that kerosene was replaced by petroleum jelly. They have similar densities and would both thin out the paraffin wax. I think this happened about 1969. The guy who runs hippielight.com managed to get some pictures of some old documents from Lava Lite and photograph them. I took out the rotation on the site to make it easier to read. Note this picture from the site saying their new formulation with new "anti-cloud, anti-stick, and non-freezing" benefits. Anti-cloud may have been a switch to Sodium Lauryl Sulfate. Anti-stick maybe also Sodium Lauryl Sulfate. The anti-freeze is Propylene Glycol. Remember Propylene Glycol is literally sold as antifreeze. 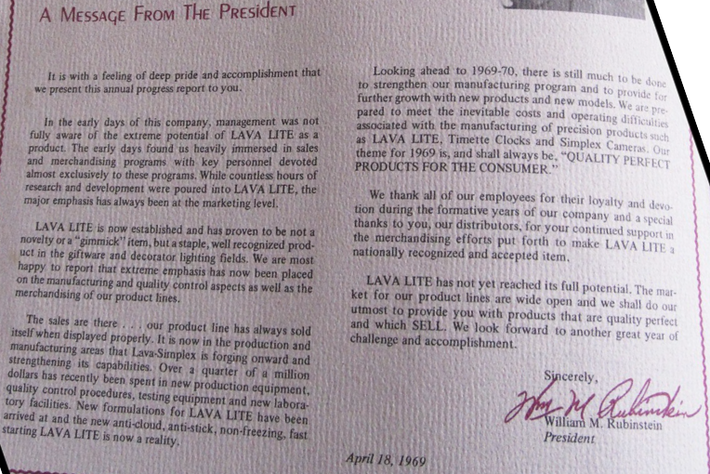 The most important thing here is that chemicals dissolve in paraffin. Or it is the dissolution of paraffin in them. Chlorinated compounds, especially PERC, do this easily. For example, the density of silicone oil used in eye surgeries is more than one. But silicone oil does not mix with paraffin, it does not dissolve. It creates a phase. When PERC is added, it dissolves. I think it is best to use chlorinated paraffin. Its density is greater than one.
Emulsions are different. It happens in the form of (w / o) or (o / w). It causes clouding. Another important point is that the substances used as surfactants; The surfactant causes clouding at the operating temperature of the lava lamp. The temperature value of the surfactant to be used at the cloud point should be known.

Yeah, I have a specific 52 oz china schylling that I have been eyeballing.  I think I'm gonna do *exactly* that when I get a bottle capper.

...just the dankest of information...

Alright, I got a new batch of strange and wonderful chemicals in, so lets mix them up in random proportions and see what happens! 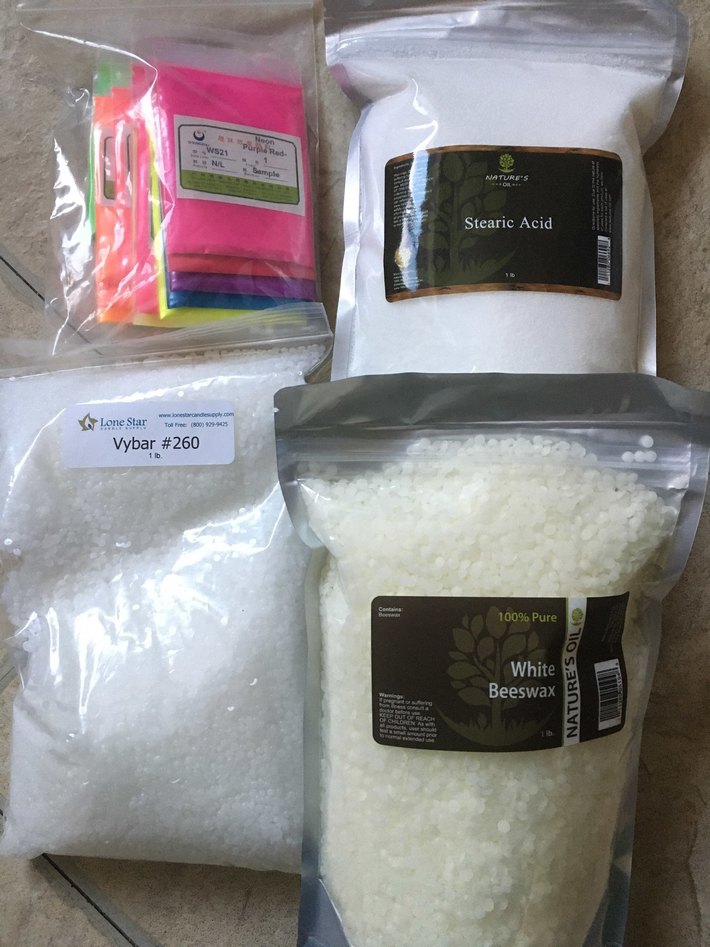 According to random forum/youtube comments, Vybar and Stearic acid can be used to increase opacity.  Beeswax is just because I want to see how it behaves.

The powdered pigments are what I'm most excited about.  I got them here:

All of my research on the methods used to color OG formula leads me to believe that the same powdered pigments used in Crayons will work best.  They are Melamine formaldehyde resins, a VERY fine powder (almost like flour).  I have no idea how much of this stuff to use, so I just dipped the end of a knife in there and yeeted it in.

I didn't know they'd ship glow in the dark stuff in my sample pack! 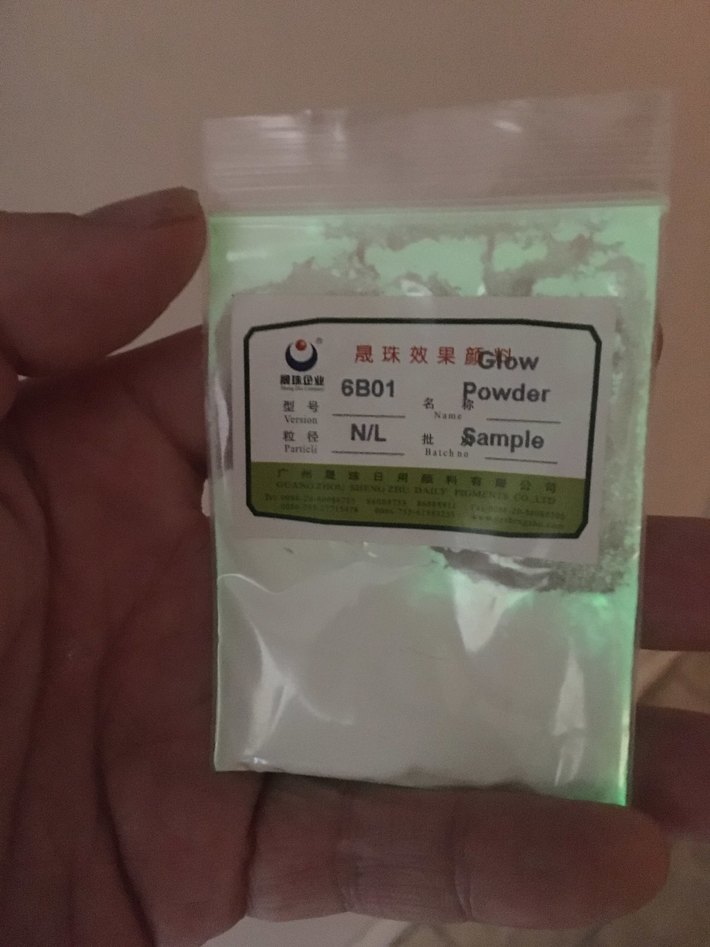 So DUH, we are gonna try that today.  Here's what's cooking:

I am using FAR less micro, and no kerosene whatsoever.  The idea here is I want to see if we can lower the melting point without using kerosene, but also have the benefit of opacity from a touch of micro.

Quick update:  The neon powders are P O T E N T.  I can already tell I used too much.  This picture is screaming hot wax, which SHOULD be completely translucent: oh well, still gonna pour it and see what happens.  But as long as it doesn't mix with the water, I think it's promising.