I really, really want one of those rings, Bohdan. Figure I might as well sketch up a bit of history and info since you're such a big fan of this one classic model, Jonathan, so here goes:

What was named the "Century" in 1966 was, a year earlier, simply the Lava Lite, a new sensation in novelty lighting. The first-year models are rare as hens' teeth; they have a copper-finished base which has no visible seam at the 'pinch' or narrow point, and the black plastic tray underneath has no 'feet', unlike models made in 1966 and later. A rotary switch was mounted on the side of the base. Some 1965 models had a matching copper cap, others had a glossy black one. Color combinations were as follows:

Here's the wonderfully evocative blurb from the first 1965 introduction brochure, aimed at retailers rather than consumers: "Never has an item promised faster sales on sight. Immediately-- Lava-Lite evokes words like: dreamy, soothing, intriguing, exotic, entertaining, fascinating. Because Lava-Lite is unique. This shimmering new decorator design with its glowing, moving liquid inside shouts "don't take your eyes off me." Lava-Lite captures everyone-- and the longer you watch it the more fascinating its many changing shapes become! Here is the first indescribably different, truly new idea in lighting in a decade . . . born to be displayed, born to sell on sight, born to capture plus business as soon as you start promoting it." And who was the first firm to try black lava? Lava Corp. shows it on a Century in this brochure, despite it not being listed as a color - experimental, perhaps? First year Lava Lites had another feature - really more of a flaw - in that the "lava" was actually a thick oil which did not solidify when cold, thus shipping was difficult as the lamps tended to cloud.

1966 got the lamp the official model name, "Century", and series designation, "100", as it was the very first; 1966 saw the introduction of no less than eleven new Lava Lite models, in every possible shape, size and variety. It had some changes: most notably, the lava was now a wax which solidified completely when cold. There were changes to the base, too: it acquired a visible seam at the narrow point, which was due to a two-piece design where the top cone was attached to a cylindrical inner sleeve with the ceramic socket attached. This simply rested in the outer cone. The finish was still satin copper, but the caps got a sparkly gold finish. The tray bottom received three little feet, and the built-in switch was done away with in favor of an in-line switch on the cord.

Come 1968, there were more changes. "Champagne Mist" vanished on all but the non-electric models. The Century was the only lamp still with five colors; the Enchantress had four, the rest three. The base, still a two-piece design, got the halves fixed together, and switched to a satin brass finish, actually yellow lacquer over steel. Come the 70s, all models save the Enchantress came in only three colors: red/clear, orange/yellow, and green/blue, and corners were cut by using red wax in what they still called orange/yellow. The grass-green wax in the green/blue was first switched to what the factory called "sage green" before they settled on a cream color; this still looked green in the blue liquid. For a few years in the early 70s, the lacquer was done poorly, and would fade with age, leaving a mis-matched scheme of silver base with gold cap.

Come the early 80s, tastes changed, and the Century was reduced to two colors: red/yellow and white/blue. Thing was, Lava was already using red was in what they called orange/yellow and cream wax in the blue/green; they darkened the blue liquid a bit, changed the names and called it good.

About 1993, 32oz. models switched to the bottlecap top. 52oz. lamps didn't switch over until 1998. Around 1994, with Lava introducing new colors and models like the white-based Princess and the satin silver Silver Streak, as well as the black/clear, pink/pink and orange/orange for Midnights, Princesses etc., out came the Silver Century - with screw-on caps. Colors were red/yellow, white/blue, red/clear, blue/clear, black/clear, purple/clear and pink/pink. A year or so later, and out came the Midnight Century - in the above seven plus pink/clear and dark green/clear. Another year and Centuries switched to bottlecap tops, and pink/pink was replaced by white/pink... and on we go. Trivia bit: Almost without exception, silver Century cover-caps (for bottlecap tops) were metal, while gold and black ones were plastic.

The Century: Produced from 1965 (based directly on the Crestworth Astro) and produced straight up until Lava production went to China. You'll be missed, the most classic of all lava lamps. While I do like the Aristocrat, it does not fit the ads proclaiming "The original shape of cool" with an Aristo silhouette - the Century was and is THE original shape of "cool".

That was a nice excuse to break out my catalogs. Jonathan, you mentioned I believe that you think you may have an original 1965 Century? Can you post photos or give me a detailed description? If it IS, it is the very first EVER found. If it isn't, it's probably still very vintage, and I can help put a decade on it. Naturally, the holy grail of Lava would be the cream/lavendar '65 or, even better, the never-sold black/clear. But a later 60s Century in yellow/blue-green or red/fluorescent green is still hyper-mega-rare; I've never seen or heard of one of these showing up, either, though I have photos of them in a catalog. I love them also.

Yes they are. Even Iron Giants like them. A table ring really sets them off.

Love the look of the century with the ring. Maybe you should start a secondary business.

Permalink Reply by Autumn on December 17, 2010 at 11:25pm
Theres nothing better than a century with a purple/yellow globe or a blue/yellow globe. I currently have six centuries on my shelves and I have two in my storage area. I have all three color bases as well as a custom white painted century(painted by Quisp) with a clear/white globe. I also have a goo kit silver century with blue wax and blue water and it looks amazing. I wish lava would bring the century back.

Theres nothing better than a century with a purple/yellow globe or a blue/yellow globe. I currently have six centuries on my shelves and I have two in my storage area. I have all three color bases as well as a custom white painted century(painted by Quisp) with a clear/white globe. I also have a goo kit silver century with blue wax and blue water and it looks amazing. I wish lava would bring the century back.
i know they are

Permalink Reply by David Valle on December 25, 2010 at 11:48pm
Would love to have one. I checked ebay but I'm not sure what I'm looking for yet. I still have some learning to do. THey are truly awesome though.

Permalink Reply by bluecastlesky on March 19, 2011 at 8:50am
lol yes just by your pic I thought... who likes centurys, you do! ha just was a funny reply with the title of this thread  hahah omg your collection is amazing i love the 52 oz blue/clears

I love them also. 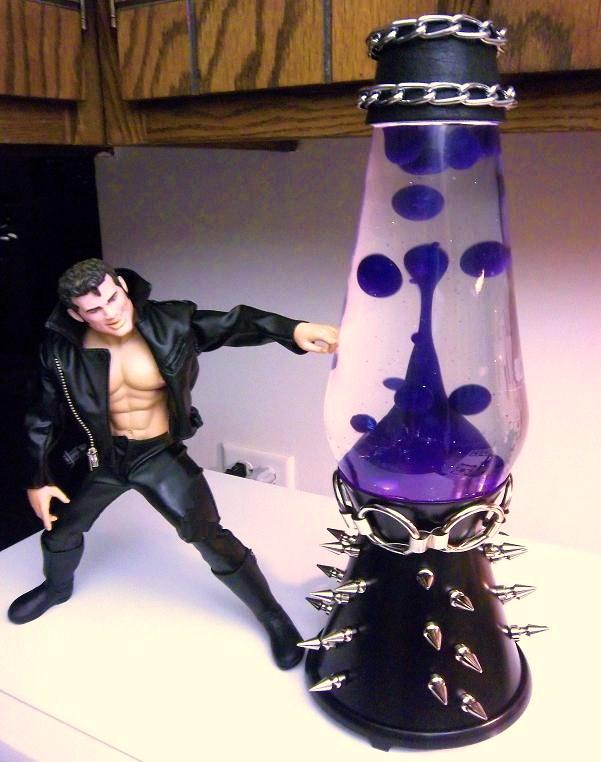 I love the Tom of Finland doll. I got some Billy dolls. ;)
Good job on base and cap heh
wizard of ooze said:

Centurys can be fun to customize too.