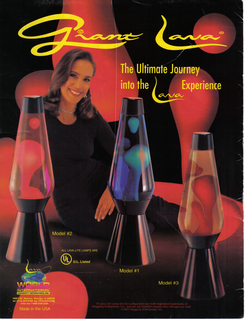 Made by:   Lava Simplex International

The Giant later turned into the Grande. The Giant is 27" tall and 8.5" in diameter. They weigh about 25 lbs. These lamps can run for very long periods of time. Some people run their lamps for weeks at a time, but the long term effects of doing this is unknown.

Giants were $299 at Spencers, some were sold at the same or higher prices at "head shops". They were the top prize at Dave & Busters for awhile too. The glass bottle was made in Germany and filled in Chicago by hand, there was no production line for the Giants. I believe the total amount made ( all colors ) was 1000 lamps. Believe it or NOT they didn't sell well.