Does anyone know what year the Copper Crestworth Astro Mk5 was produced?

I know it isn't Bowie, Pete, but here is one more for ya! Rest well friend.

For the lava lava people!

Ahh who knew this place existed!

Well I must say that this site is quite a surprise to me. Who would have known there was a community of people obsessed by the ooze.

Well I hope to meet some of you guys and what not.

What makes the lava lamp flow is basically the liquid solution being made correctly for the specific wax your lamp uses. In other words, you might not be able to take one liquid from one lamp,…

So my brother was by a couple weeks ago and knocked over my 1975 lamp. The cap (which was already damaged) broke and all the oil spilled out on my carpet. The wax is still in there and very little oil remains. The oil is up to the wide part of the globe . I was wondering if anyone knows what i can use to fill it up again. Any help is appreciated. Thanks

Searching for a vintage lamp and bulbs

For a friend, trying to find this lamp and bulbs. 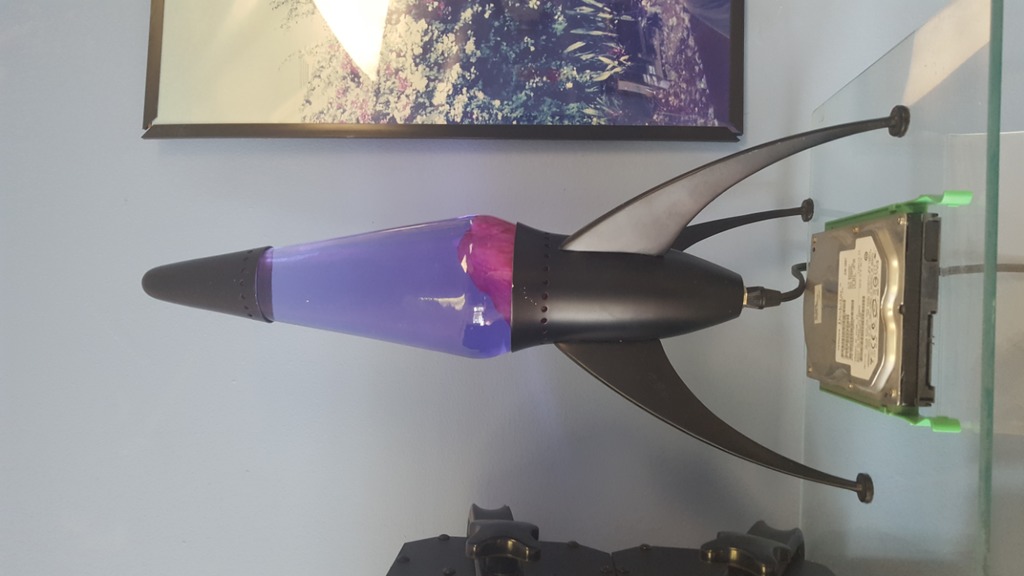 Just reposting instructions I like to send sellers when I purchase a lamp that's traveling via USPS etc. I'm posting as originally written by Weebotech. I modify it a bit as per my lamp situation.

I just did a search here to copy it again so thought I'd post for others who have never seen it or hadn't saved.

I am providing this page so that I may receive my purchase in as pristine condition as possible. I know I'm picky with these instructions,…

My NEW Grande isnt so well..GRAND....

It's been awhile, but I really could use all the expert opinions that are available here.....Would anyone care to answer a few for me?

First a little back story...

I purchased this Christmas 2015 a Lava Grande from Amazon, in a yellow wax/blue liquid format with silver base and cap. It arrived to me (NEW OUT OF THE SHIPPING BOX) dark and cloudy (the liquid). I am rather upset about this, and the seller REFUSES to admit one sent me a faulty lamp. One has claimed back that I…

I have an all original 1975 Model lamp, I have been messing with the coil and have lost a little liquid out of it. I need to add  a couple of ounces but I am not sure what I can add that wont hurt it. I was told mine has different chemicals than newer ones. Any ideas?

Help finding stuff for my lamp

I have a 1975 model Lava lamp that no longer works. It lights up but the goo doesn't blob and rise like it should. It is a 1975 model 300 Carlisle. the only thing different is the spring in the bottom is broken.

These Mathmos Smart Astros Are Awesome!

hi I am selling my crestworth princess as I didn't realise how rare it is but after searching for a few days I have realised how special this is.I have 4 small children and a dog and isn't wise to keep it.The stand has been cut at the bottom from previous owners but other than that it is still in good condition for its age.Its glitter filled and lights up red.Still fully working and looks really good on don't use as being stored out the way.I am looking for good offers preferably pickup or…

picked up this lunar on ebay uk at £1950 if I'm not wrong... is there anybody left with some sense ?

Hi Everyone I wondered if anyone know how to make silver lava?I have a goo kit and I really want to have the lava silver,I'll be really happy to get some advise.
Many thanks.Paulb

So I have a 52 oz clear/blue gookit that I'm not feelen anymore.  The blue has turned into a weirdo bizarre plum color that is notorious with the blue dye that comes from MT Goo.  I'm going to dump a butt ton of blue or violet in this lamp to make the goo look almost black, then make a food coloring blend to the orange I like and make my orange and black Halloween lamp out of this clear/blue that i'm not liking anymore.  I came to the conclusion if I really want a true blue lamp, I'm either…

The album draws near, so pumped.

Will have the double press black 180, signed, nightlight and CD, so…

Help me identify this lamp

A customer at my work returned a Lava Lamp that is not one I sell but was inside the new special edition lamp with the white base and purple liquid. I was hoping someone here could help me identify the lamp I now have and where it possibly came from or how old it is.

I have a classic "Century" that cracked. Anyone selling a replacement or a good flowing, used one?