You people are a bad influence!

So, I'm sitting here watching a Grande, an Aristocrat & my new Dexter lamps beginning to flow. I began thinking this is the most Goo I've seen in 3 years... As much as I lived for the Oozing Goo community... way back when, I hadn't visited since my Husband's MS diagnosis in '06. I quit buying Lava, packed up all 52 lamps & moved us to my Momma's. I kept a few out, The Beatles ceramics, the Grandes... but I never turned them on. We adjusted to our 7 ft. by 20 ft. room, learned to live with other folks & tried to keep a smile on our faces.
But a couple months ago, it hit me. Three years... It took two years to complete the Rainbow! 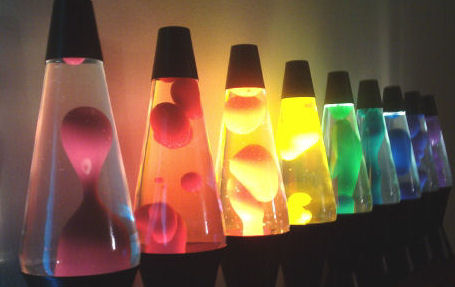 That's a long time to be away from friends. Not to mention the 52 are packed in the basement, just sitting there! I came back to OG to sell a lamp four months ago and I haven't stopped since! I've been pulling deals, setting the lamps on to Goo & meeting new folks, as well as celebrating the old GooHeads!
Three lamps on... Three years with none... Too damned long!
The Goo brings a smile to my Husband's face, though he hates how much I'm at OG. But when the Grande spikes, he soon forgets the alienation he felt, earlier when I was "chatting" with OG'ers. I don't mean to get lost in this world of Goo

it just happens! I'm trying to be attentive, to everyone in my life, so I want to say thank you... to all of you who make this site worth coming to.