It's been a while since I've been on here (probably since the last time I managed to pick up a new lava lamp to add to my MCM collection).  This weekend, I nabbed a 1980s (black electrical cord) aristocrat with red lava, orange/red liquid (sadly, the gold cap is chipped, but only around the bottom) and a 1972 Century with what I'm guessing is orange lava yellow liquid?  It's a bit cloudy, which I'm working on clearing up, but the wax seems to be pretty light in color for being the orange color scheme.  It does look orange when lit up and running, but I just want to confirm that it is the orange color scheme.  Were all the early 70s orange lamps this light in color when the lamp was turned off?  Thank you so much for taking a look!

Here are a couple of photos of the century that I need the ID confirmed on: I want to give a bit of an update on this lamp and add another question to this.  I've been working on clearing up the liquid in this lamp with the burst method of running the lamp in short bursts followed by long runs and it seems to be helping a bit. We'll see if it clears up the lamp further in the future.

So, for my addendum question:  The sticker inside the cap says 1972, but from what I've seen on here, the lower level of the wax in my new lamp is clearly indicative of the 1960s releases.  Unfortunately, I don't know the history of this lamp, so I have no idea if the cap has been changed and I don't see a number code.  The base I got with it is a 1970s century base (brown cord, unevenly spaced pin holes, Is not separated into two pieces).  It's all coming together to suggest that this is not all original, but I guess I still need a little history lesson here:  Is there a specific month/year for which it is known that the wax levels were increased?

If it is a screw top, your "screwed", unfortunate to say.  No pun intended.  As a screw top can be removed and tweaked at any given time.  It will make it easier if you have to "kit" it and convert to glitter.  Your choice there of course.  Good luck with clearing process.  Give a couple of pics of the lamp in it's full glory.  Hard to tell as pics are taken, right up on the globe.  Get the whole lamp in pics so we can see what we dealing with.  Thanks again, and good luck!

Hello Mr. MaGoo, and thank you very much for your reply.  I apologize for the late reply.  I've been quite busy.  Since I have a vintage lava lamp with the 1960s level of goo and didn't break the bank to get it and it came with a friend, I can't say I feel "screwed."  It does appear that the lamp may be pieced together from other lamps, but I think I can live with that.  It's quite a pleasant lamp with an interesting appearance and a unique color scheme.

It has cleared up part of the way, but there is still a bit of a misty look that remains, but I don't think it really takes away from the lamp at all.  I've been trying to read up on which color schemes this could be (assuming the goo is original, which I believe it is).  The goo seems too light in color when the lamp is cool to be "orange" and I think I read that the orange colored lava in the old 60s lamps is basically red in color.  It bears some resemblance to what I've heard is the champagne mist color scheme from the old Centuries, but I also have seen that the colors can sometimes shift over time, probably as the dyes they used decay over time.

I do see a possible issue with this lamp, though.  The lava is full of small bubbles just like the squiggle aristocrat I have.  However, as this lamp gets running normally, I notice a gradual build-up of tiny bubbles of goo that I believe are visible in the third photo I'm uploading.  These settle out and rejoin the bulk of the goo as the lamp cools down, but I don't know what would happen if I ran it for an extended period.  I'm thinking of trying to put it on a dimmer switch or trying to find a less powerful bulb to keep the goo from fragmenting like this, but I'm willing to entertain other suggestions that don't involve opening up the globe. 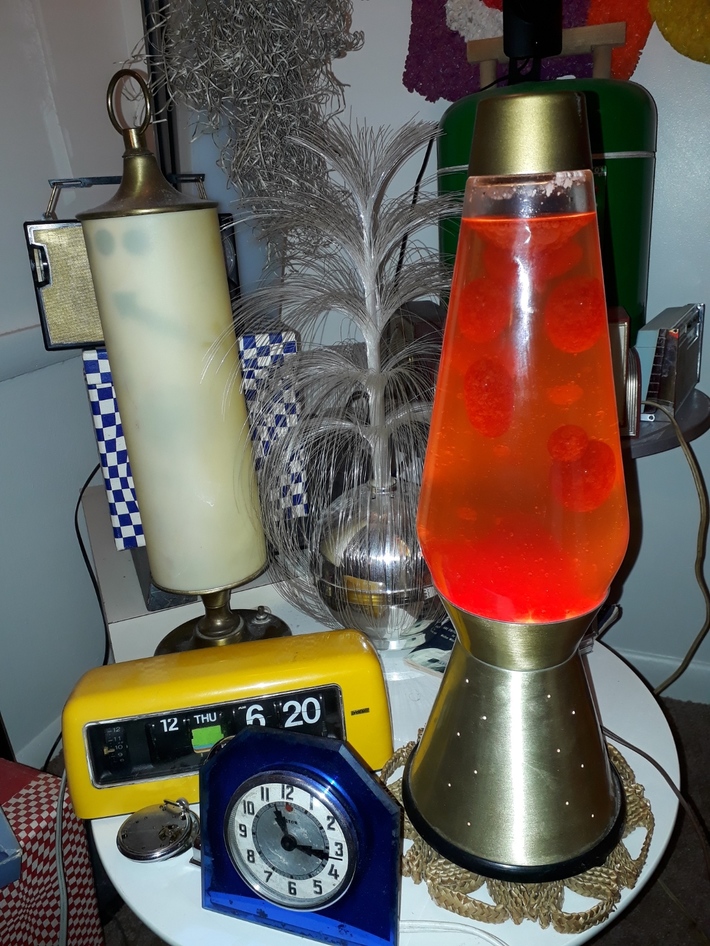