Phantom Flower fiber optic lamp does anyone know anything about them please?

Does anyone know anything about a Phantom Flower fiber optic lamp please? It's thought to date to 1969/early 70's. There's a name beginning with "A" but it's so small we cannot read it. It looks very similar to the Crestworth Galaxy, but there's obvious differences. Although the flowers look exactly like flowers found in one of the Crestworth fiber lamps. It lights up and changes colours as it rotates. I need to put a 20w bulb in as per the label, just waiting for them to arrive. We've wanted to add a fiber optic lamp to our collection for a long time, we were looking for a Crestworth Galaxy, then we found this one, beautiful design.

Any information would be great please :) 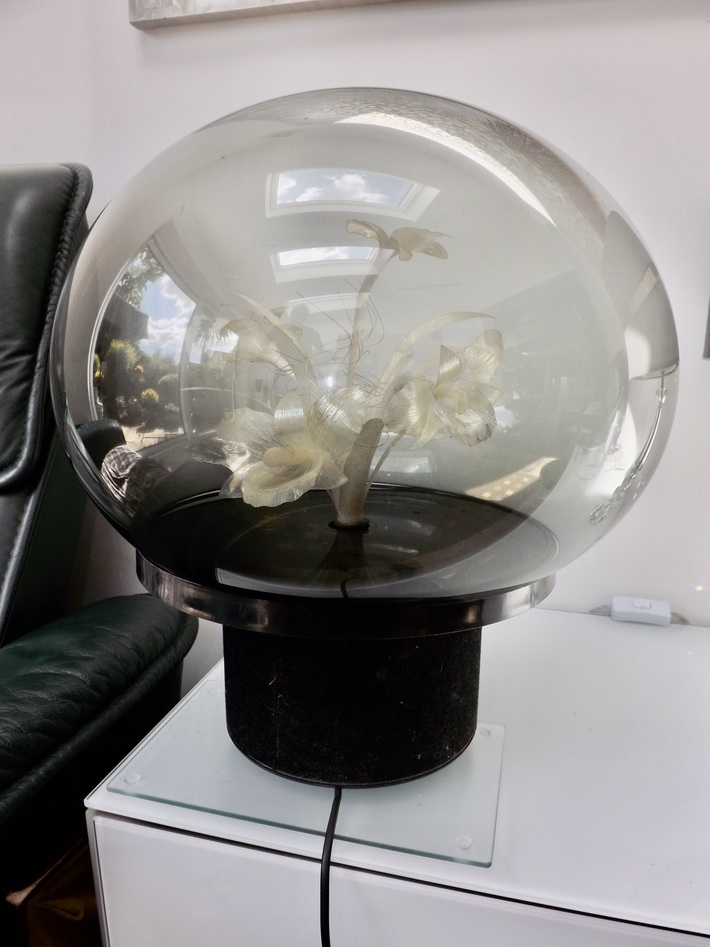 Thanks for that info, the photos don't do them justice, they look less quality than they are, I've got very closeup macro shots on them on here, showing the tape that holds the fibres in place on the back of the flowers. The flower stems are not wrapped in any tape though, so don't know how they are holding together. Probably glue lol.

Those are great, a very effective display against the black background.

The flowers on your bottom lamp look awfully similar to my flowers, they look like orchids, what make of lamp is yours?

I believe the three Crestworth flower designs had names, but I don't recall them offhand. Are these  all of them, and which is which? Sorry for delay in replying, looking for paperwork - and failing to find it.

They do look similar flowers, don't they?

Yes, I think they were called orchids, but keep reading...

To answer Jonas's point as well, yes, there were just the three lamps in the series, and each had its own flower I believe. The set I have came without boxes/paperwork but I got another black version years later with its box, and the flower varieties are printed on the side, it's stored away and will need finding, I will post it later, this should answer it (unless anyone else out there has the box too and can post it first?)

Interestingly, I have seen spare flowers on eBay occasionally, normally described (and priced) as Crestworth spares

There was a fourth one-off lamp commissioned by Craven Walker as a present for his sister, a deluxe copper/gold version with an extra  large flower; I have this too, I'll add it to the box photo as and when. It has two motors and is so delicate, it can hardly be moved without the rotation gears becoming disconnected, it was definitely not made for general sale!

Btw, I have never seen other versions of the gold and bronze Crestworth Flowerlites, I think they may not have got past the prototype stage, which is a shame as they are much handsomer than the black one - but I guess pricier to make, too...

Your lamps are beautiful, I especially love the gold and bronze versions, much nicer than the regular black version.

Andy, what's the story on the Crestworth with a tilted, smoked bowl containing an enormous, five-petal flower? That's the one I love... and will never have. Seems to use the Phantomlite base mounted in a C-shaped yoke atop a Nordic base cone.

Yes, those names ring a bell...

Thanks - it's saved a trip up to the loft.

I leave it to you to ID the individual flowers...

Ain't she a beauty?

This took more time to restore to full working order, and then convert to LED, than the other three put together.

I've left the Telstars in for size reference 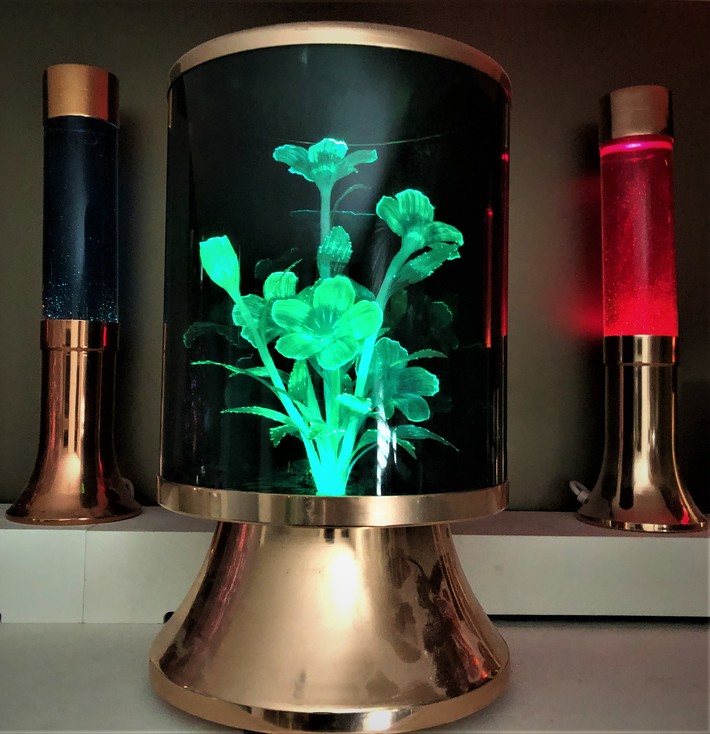 wow, I love that lamp.

Susan, what's really surprising (it took me ages to spot) is that this lamp is made up of the same parts as the other Flowerlites, but slightly added to - the base is upturned and there's an extra plate to hold the cylinder base

And of course the flower is bigger...

But you'd never guess unless you studied them all together...

I wish they'd bring some of these designs back.