(by Craig French, aka "Fogrider", with many thanks to all the collectors
who helped out with information and photographs)

Often overlooked by collectors, the Consort line of lava lamps consists of at least
30 distinct models, accessory packs, and globe colors. Some models are
extremely rare. Some have never been seen in person by collectors!

Consorts are beautiful little lava lamps. Apart from the usual issues of cloudy
liquid in the lava models (which can often be filtered out with the right
equipment), they often suffer from a condition where the lava floats to the top and
stays there. This condition can usually be corrected by gradually replacing some
of the liquid in the lamp with distilled water (which is lighter than the standard
liquid found in lava lamps) until proper flow is restored to the lamp.

Transplanting the contents of a newer lamp to an old Consort globe isn't
recommended, as it's often impossible to get the heavier lava found in most
larger lamps to flow in the relatively cool running Consort models.

Lava lamps that use the Consort globe have a small metal reflector which sits
around the light bulb in the cup. It's often lost, and therefore missing on some
Consorts that are for sale.

Globe diameters varied slightly over the years. Not all Consort globes will fit into
other Consort cups.

Consort lava colors tend to be one of three combinations: red/clear,
orange/yellow or green/blue. Another color that was used in the Consort series of
lamps is "Champagne Mist", which was cream-colored wax in cloudy, pale amber
liquid. This was offered instead of orange/yellow in all US lava lamps (except the
52 oz. Century models) in 66-67; in 68 on, orange/yellow became one of the
main three colors.

Plastic Consort caps can be easily broken if over tightened, and the finish often
reacts badly to chemical cleaners, including alcohol based glass cleaners. Many
silver looking caps are in fact gold colored caps that have faded over the years.

Many lamps that use the Consort globe are quite rare. No Meditation lamps have
surfaced yet. Only two Executive lamps have been seen. A handful of Princess
and Astro lamps have been spotted. However, the basic square based Consort
lamp is quite common, and no collection is complete without one.

Other, as yet unknown Consort models may surface one day. Maybe another
GemLite model or perhaps another variety of square based Consort?

Later production basic Consort models also had a gold finish on the cup, post,
and cap, and a wooden base The post was flared at both ends.

The next generation of standard Consort lamps had a faux wood finish brown
plastic base that sloped away on the sides. The post was hourglass shaped. 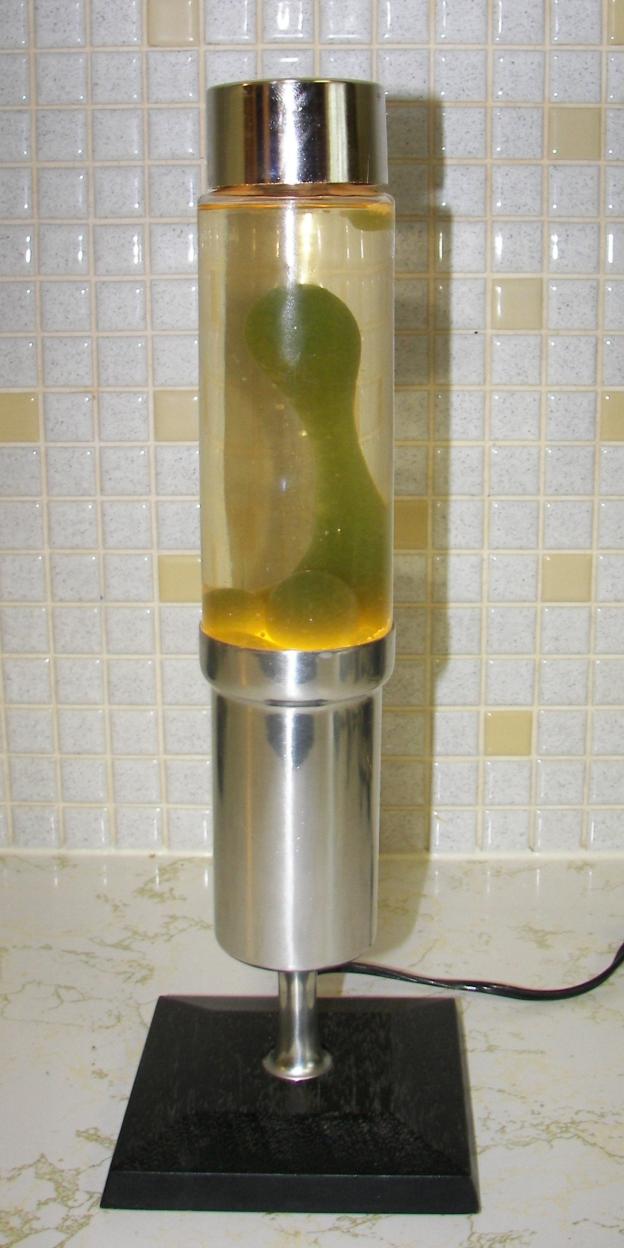 Some interesting varieties of the basic square based Consort exist:

First, is this unusual Consort lamp made in August 1971. The cup, stem, and cap
are polished aluminum (referred to as a "chrome" finish in a 1972 ad). The lamp
uses a square shaped plastic faux wood base, but the base is black in color
rather than the usual brown color. The warm glow of the lava contrasts nicely
with the cold look of the silver and black lamp. This model is referred to as a
"Nordic" in a 1972 gift catalog advertisement.

Another variety is this aluminum metal square-based consort. The stem and cup
are highly polished. I believe this lamp is also called a Nordic Consort. Another
Nordic base variety exists. It has a marbled finish.

Other varieties are rumored to exist, or have been spotted in online auctions,
including a chromed flared base and a round trumpet flared base in faux wood. 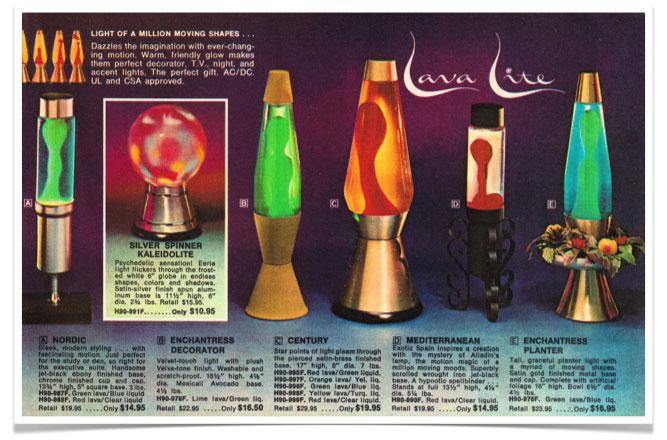 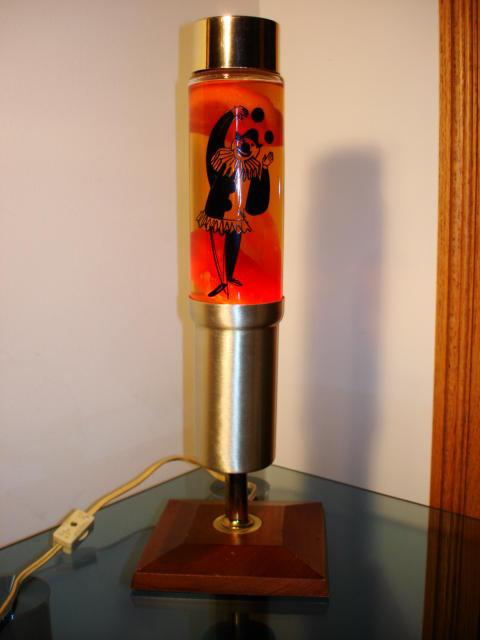 Other lava lamps that use the Consort globe include:

The Childs Nite Lite. A square based Consort lamp with a juggling clown
embossed on the globe. This lamp is often called the "Clown Consort" by
collectors. 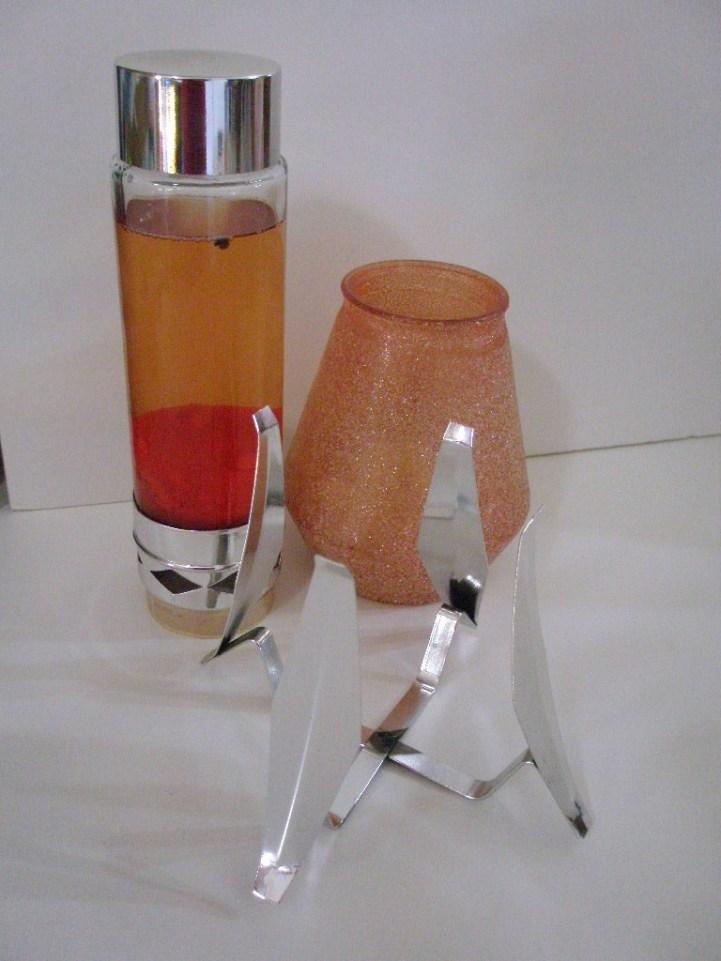 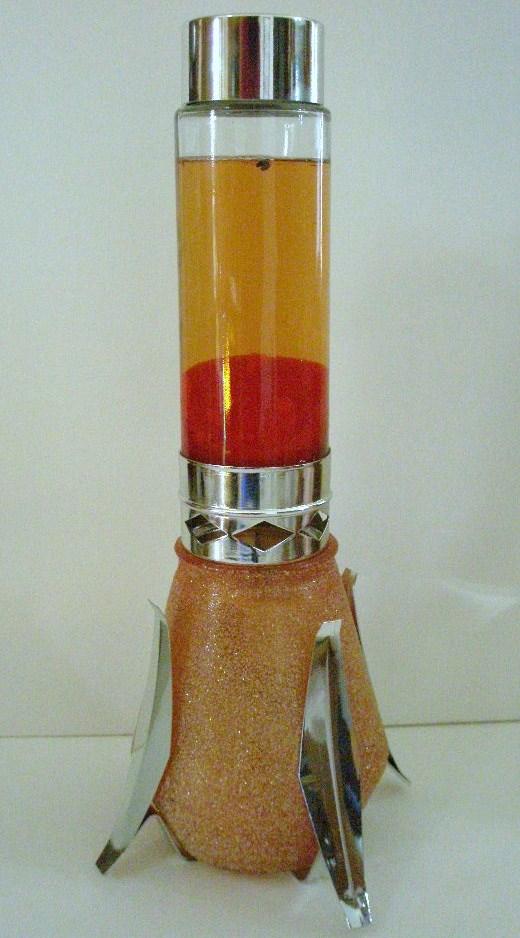 The famous 4 legged candle powered lava lamp. One of the rarest lava lamps!
Up until October 2011 it was not known whether this lamp actually existed or not!
Early Lava sales brochures hinted at its existence. As of October 2011, only one
of these lamps was known to exist!

Model 3100 was known as the "Continental Gift Pack" (a complete lamp in
silver finish with two extra candles). Silver finish.

Model 3200 was known as "The Savoy Commercial Model", and was marketed
to the restaurant trade). Gold finish.

The glass globes were meant to be used once, then tossed away and replaced
with a new glass globe. Perhaps this explains why this model is so rare! Note the 4 legged candle powered lamp in the background of the upper picture in this 1966 lava sales brochure.

Early Lava sales brochures show a deeply textured candle powered model with a
base that looks like the bottom of a pineapple. As of 2011, no known examples
of this lamp have yet surfaced. It is believed that this lamp pre-dates the lamp
above. 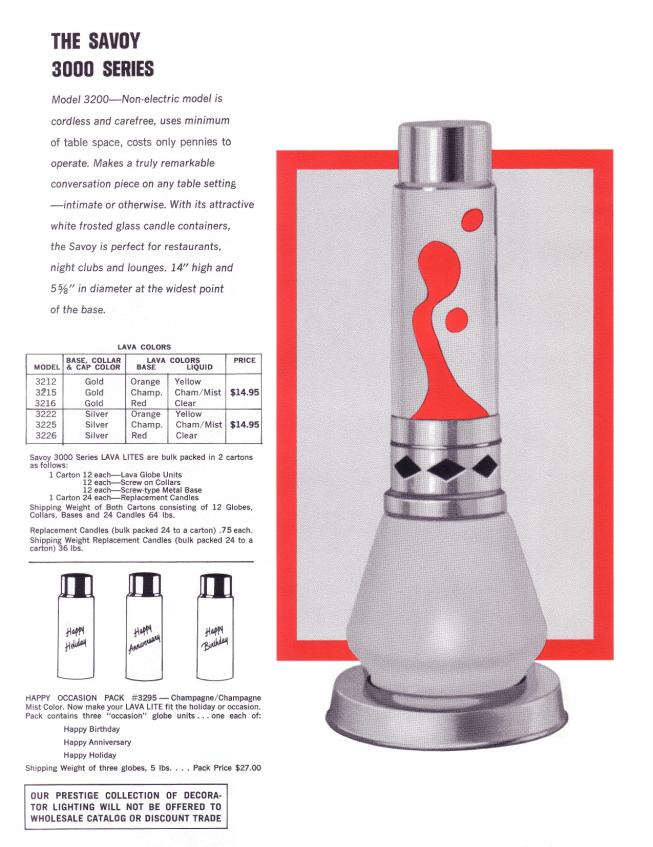 Later Model 3200. Similar to the 3100. Referred to as the "Savoy Commercial
Model". Marketed to the restaurant trade. Bulk candle packs available. A "Happy
Occasion Pack" (#3295) along with bulk parts packs, were available for the
Savoy model.

Neither the Happy Occasion Packs,nor any of the bulk glass globes,metal bases, metal collar or lavaglobe packs have ever been seen bythe collecting community.

Both of the above models originally came in silver and gold finish, but in gold
finish only later on. 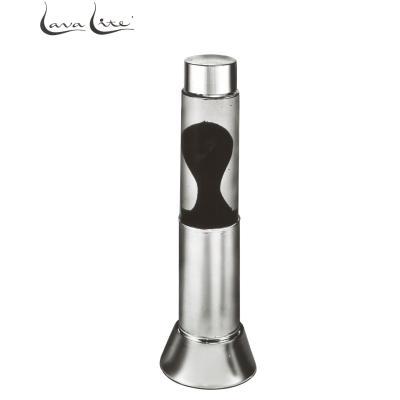 The Capri. Available in either silver or gold finished base and cap. 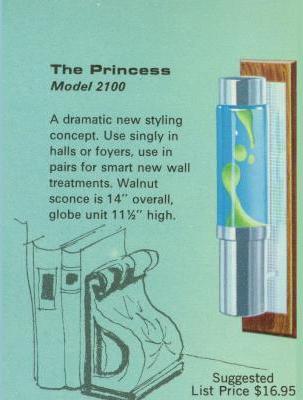 The Princess (Model 2100). The much coveted wall mounted Consort lamp. The Windsor. A Consort model with a raised round metal base in a faux wood
finish. 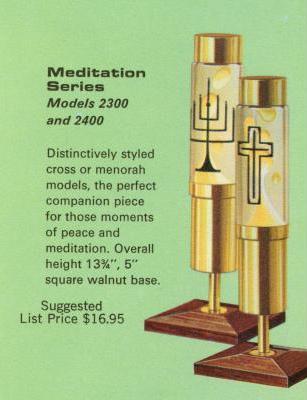 The Meditation series (models 2300 and 2400). Rarest of the rare.One has a
Christian symbol embossed on the globe; the other has a Jewish symbol. These
lamps are also known as "Prayer Lites"). As of 2011 no examples of either of
these lamps have been documented. Rare indeed!! 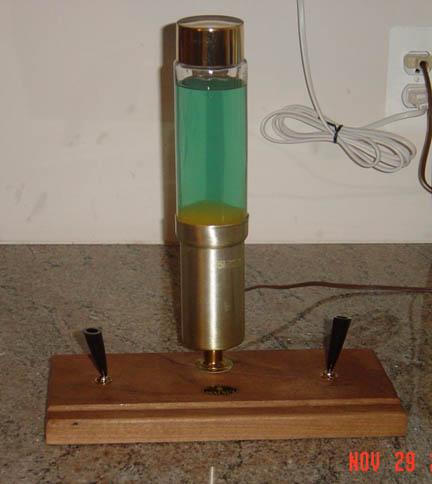 The Executive. A Consort Globe mounted on a walnut pen-holder base.
Extremely rare. I've only seen one example of this lamp. 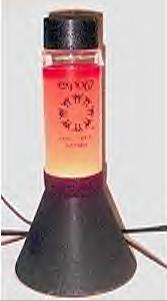 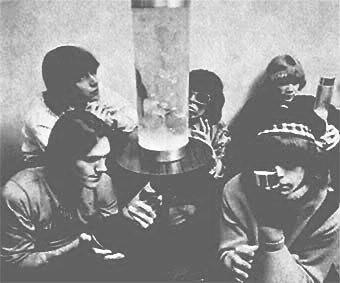 The Expo ,,67 (sometimes called the "Apollo" or "Volcano"). A Consort globe
in a black tapered base; the Montreal Expo '67 logo is embossed on the globe).
It's believed that this lamp was marketed at the 1967 world exposition in
Montreal, Canada. This is a very rare lamp. I know of 2.

The 1960's rock group the "Blues
Magoos" pictured with an Imperial
lava lamp. They're holding Psyche-
De-Lites; lamps marketed by the
band. They look very much like the
Expo '67 lamps. It is unknown if any
Psyche-De-Lites have ever surfaced! 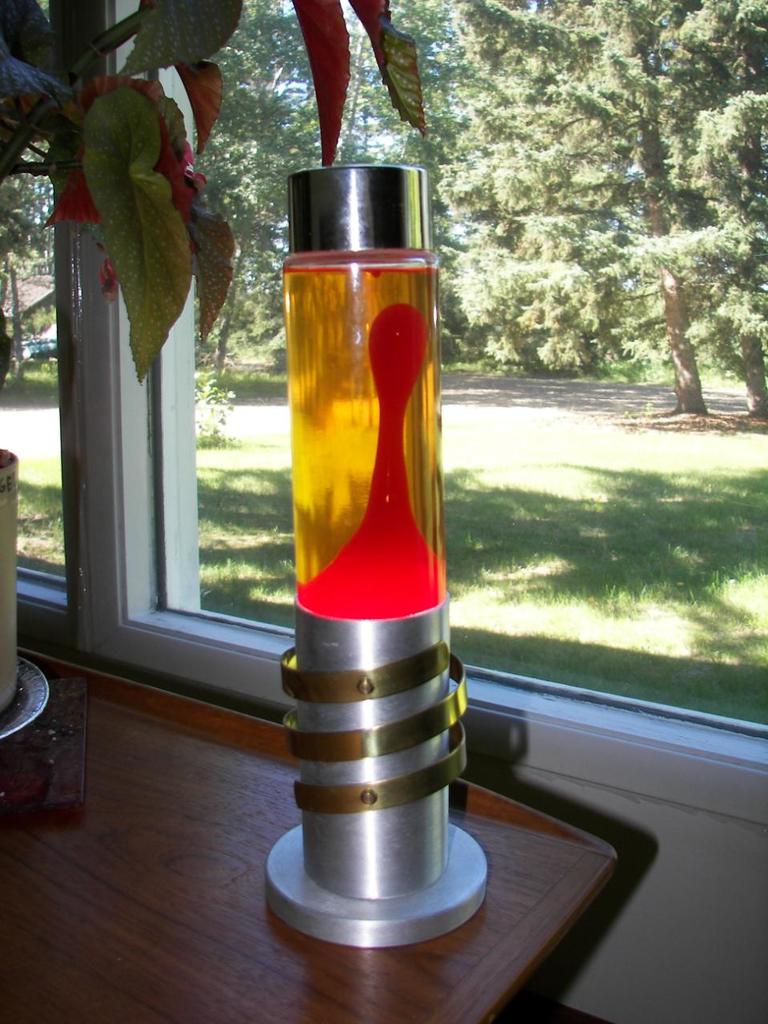 The Astro Lava Lite (Model 2500). An unconventional lamp consisting of a
round rough-brushed aluminum cylinder attached to a fairly flat round base. A flat
solid brass band winds 2 ½ times around the base cylinder and is held to the
cylinder by two brass screws and nuts. The cap is gold colored.
The rarity of this lamp is about on par with the Executive. The Astro Lava Lite
dates to sometime in the mid- to late-70s. A b/w, undated catalog illustration for
one lists the standard colors (orange/yellow, red/clear, green/blue). 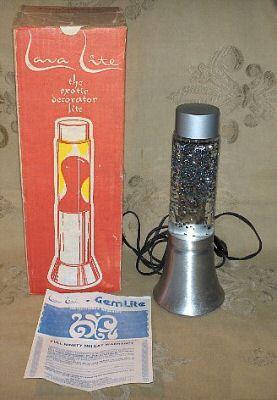 GemLite lamps (large, fast moving, square aluminum particles in a clear
liquid) that use the Consort globe include the following models:

The Confetti. Model 650. A GemLite globe mounted on a flared conical silver
colored base).

Confetti
The original clear model 650 included an optional sticker that fit on the base of
the globe and changed the color of the globe. 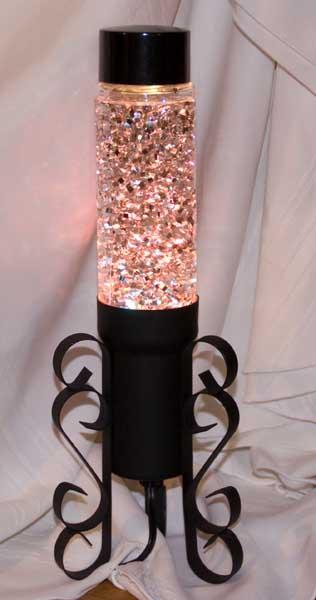 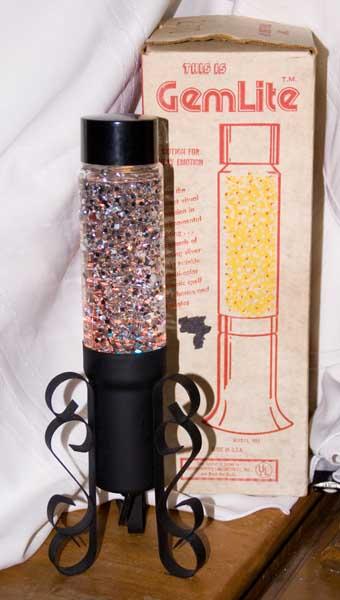 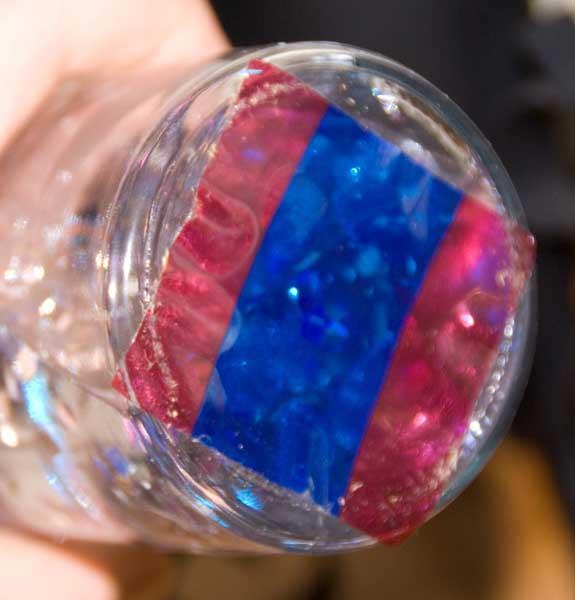 The Mediterranean GemLite. (Model 2970) Same base as the lava version, but
with a GemLite globe). 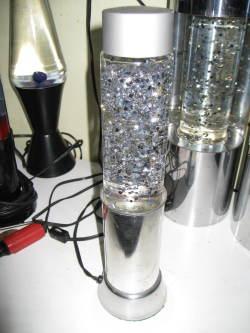 The Capri GemLite. Capri base and cap with a GemLite consort globe.

The Capri Novelty GemLite. Available with a "Coorz" or "11-Up" wrap around
parody sticker on a silver colored base. Some collectors debate as to whether
this was a model marketed directly by Lava Corp., or a Capri GemLite that was
modified and marketed by a second, unknown company. So far, no mention of
this lamp has been found in Lava Corp. literature of the day.

The Consort GemLite. The author has seen a picture of a square based
Consort lamp with a GemLite globe. Factory literature doesn't list such a lamp. It
may be an unknown variety, or perhaps someone stuck a globe from one of the
other GemLite varieties into a standard square based Consort base. The Consort Glitter Lite. (small, slow moving particles suspended in a thick
fluid) are sometimes reported, but so far all have proven to be fake. They turned
out to be basic square based Consorts with transplants from newer knock-off
glitter lamps. At this point in time it's believed that standard square based
Consort Glitter Lites were never produced by the factory. 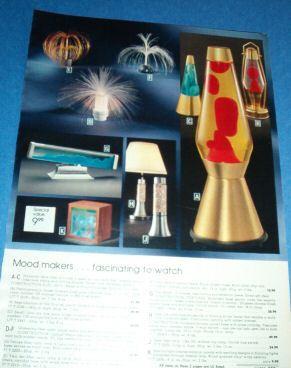 The GemLamp. A 650 Confetti globe mounted in a table lamp style base. A very
rare lamp, with only 2 known examples being seen. 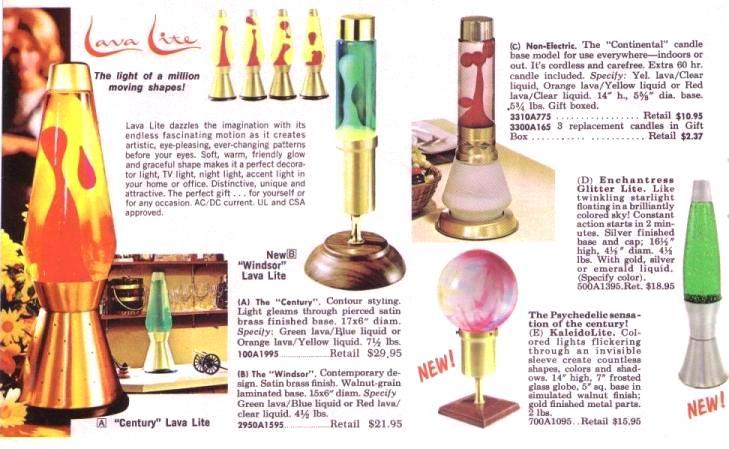 The rarity ratings below are based on my years of collecting vintage lava lamps,
as well as the opinions of other collectors.