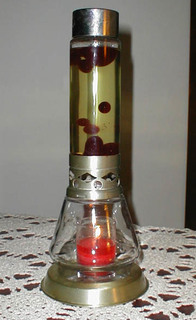 Later in 1966, a catalog lists these colors:

This was a "non-electric" or "cordless" model. It had a small cylindrical bottle and a cap of slightly smaller diameter with a slightly domed flat top, also used in the Consort and many later models. The globe holder was metal collar having a row of cut-out oval vents. This collar screwed onto a glass cup, containing a poured wax candle that provided the heat and light. The candle cup sat on a shallow metal tray. Early catalogs show two versions: First, a bulbous, textured glass cup on a metal tray, with oval vents in the collar; later with a row of alternating diamonds and holes as the vents, a cone-on-cone textured glass cup, widest at a point slightly below-center, with four metal "fin" legs and a metal base tray. Both early and later styles supposedly color-coordinated the liquid/lava colors with the glass color. The metal finish was silver. When purchased, each came with one bottle/cap, base tray and collar, and two glass candle cups. Replacements were sold "at you local Lava Lite dealer". A candle lasted approximately 12 hours. It was then detached from the collar and base tray when burned out, and was thrown away, to be replaced with a new one. The lamp stood 13" tall, was 6" dia. Marketing of this model was suggested for home-and-garden stores, for the "outdoor living" trend that was in full swing.

All known models have a base which used only diamonds as vents, and had a white frosted glass candle cup in a cone-on-cone shape wider in the middle, sitting in a taller tray than earlier styles. The glass cup was actually clear glass, with a thin frosted finish glued on. There is also a silver version of this lamp called the Savoy (model number 3200), that looks similar, but has a silver base and frosted glass candle holder.

More photos of the Continental

Discussions on the Continental

A new version was discovered recently. This version has a textured frosted glass candle holder that sits on four legs. The only owner of this rare version is michelle R yoder. 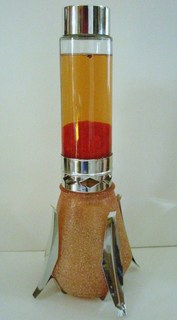 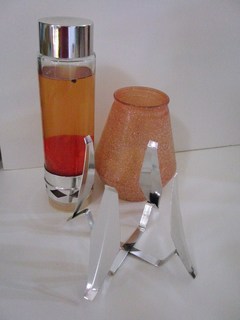