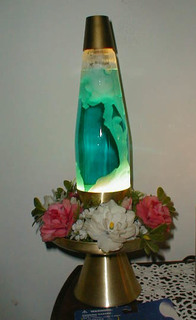 This is the earlier slender version of the enchantress planter that used the older Mathmos Astrobaby-style globes.

This model survived as is until the early to mid 1970s, when the look was changed somewhat. They were sometimes known as the "Elegant". Until their style was changed, they were offered in wild color combinations having "mist" liquid. When showing up on the market, these models aren't clouded from use - they were made that way! The liquid color may fade but the cloudiness is original.

Though after the "mist" liquid idea ended, they came in the standard orange/yellow and green/blue too.

Per Jonas: "Elegant" is not the right model name - technically these are Enchantresses - but the name fits perfectly, and differentiates them from the later ones. This name came from a photocopy of an ad, sent to me by Lava-Simplex in the early 90s (the first old stuff I ever saw, introducing me to the wild and crazy world of lava lamps unlike the ones sold new at that time). The ad showed both vase and planter in brass, and had a description but no model name, only "Elegant" in huge script at the top. I assumed it was the model, so that's what I called them.

Discussions on the Elegant Enchantress (Planter)