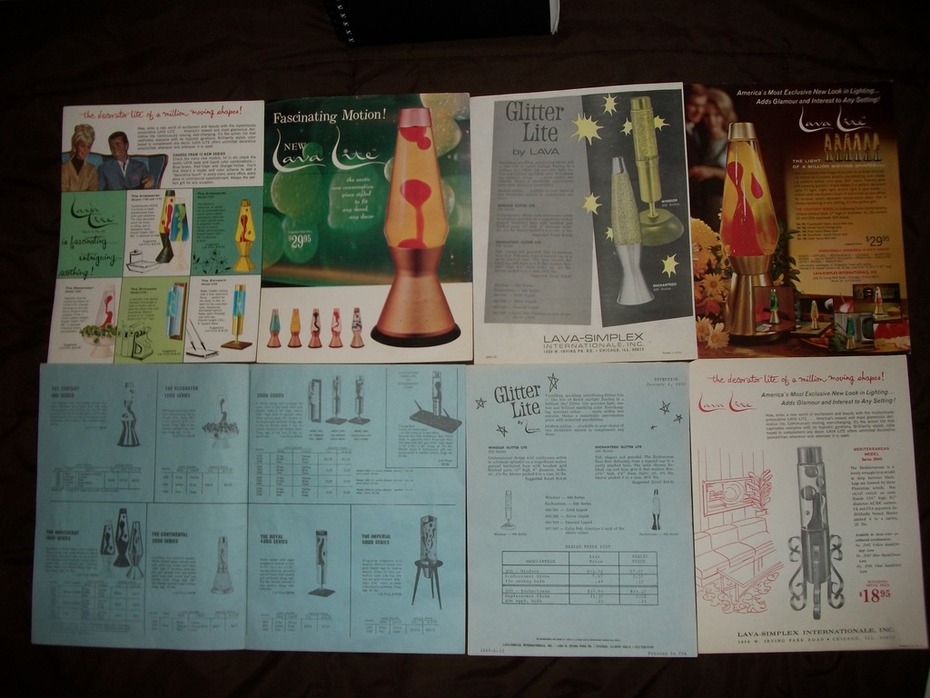 Love looking at these old ads...

I'll be posting scans of these old ones (some of them, anyway) soon.

Cool! I love the classic advertising and literature almost as much as the lamps themselves!

Comment by frank Chillino on April 20, 2013 at 10:31am
Hey, There is the Windsor Glitter I just got on the top row 3rd page, nice to see how it was advertised.

A few interesting things shown in the 1965 catalog page:

The model is not called the Century. It didn't acquire a name until other models arrived a year later. It was simply the Lava Lite. It had a one-piece matte copper base and a non-footed tray. The mirrored lamp display pictured on the back gives us a reflective back view showing the rotary switch on the base cone.

It lists colors as: blue/green, orange/yellow, red/clear, yellow/blue-green, red/fluorescent green, and cream/lavender. The last one was replaced by "champagne mist" soon after.

The front shows actual photos of six lamps. The big one is a reddish-orange in yellow liquid. Then there are five tiny shots, L to R: green/blue, amber/yellow (different from the orange/yellow, or...?), black?/clear (prototype? The first black/clear ever?), red/clear (killer serpentine flow!), and red/pale blue (another prototype? And this one has a brightly-polished cap!)

The only sales catalog in which I've seen this style Centuries is the 1967 Milway Milwaukee catalog, which shows a one-piece satin copper base, gloss black cap, and green/blue with the bubbly lava that suggests the 1965 liquid-when-cold formula (by 1966, they had definitely switched to solid lava, so the catalog must have re-used a two-year-old photo!)

Jonas, I think a lot of us would like the scans.  I remember looking through the Sears catalog in the 70's and stopping for a while on the novelty lamps just thinking how cool they all were.  And the progression of the lamps available through the years is really interesting.

I'll try to scan them all soon.

There's the one-piece base. Odd we've never seen one show up. Jonas, if you EVER are looking to get rid of these, send them my way. I'd love to have scans of them.