50th Anniversary Grande & Rainbow Grande side by side

I put my two new Grande's side by side today and both are fully heated and running.

Regarding the globes.  Both globes have great glass and great wax.  They flow great when the temp is right.  Both bases have very high socket placement and the light bulbs are pretty much touching the bottom of the globes in each case.  The 50th has a dimmer included in the cord, the Rainbow does not.  As I suspected the Rainbow over heats a great deal because of this high bulb placement and no dimmer. While I love both lamps the 50th is the better lamp, they both cost the same money, but the 50th has the gold embossed base with dimmer while the Rainbow's only distinctive "extra" is the globe paint.

Both of these globes have great flow and on the Heritage Grande base and with that base's lower bulb placement both ran perfectly at full illumination.  On their own bases the Rainbow over heats and the 50th runs fine because it can be dimmed (and yes it has to be dimmed).  Between the two if I had to choose between buying one or the other I'd choose the 50th over the Rainbow because of it's slightly better value as it has the gold, embossed base with dimmer as "extra" features and the Rainbow has just a bit of paint on the bottle.

I'm glad I have both, but the Rainbow must get a dimmer.  I'm going to buy an extra Westek dimmer from Amazon and install one in the base on the Rainbow.  If Lava Lite had placed a dimmer on the Rainbow too it would be perfect like the 50th.  The 50th is perfect to me.

Here are both together in a pic, as you can see the Rainbow is massively over heated, the dimmed 50th is purring like a kitten.  I've already stuck a dimmer on the Rainbow's cord for the time being. 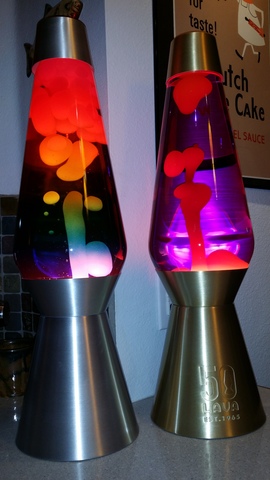 Here is a pic of both lamps after dimming the Rainbow too.  Stellar flow on each! 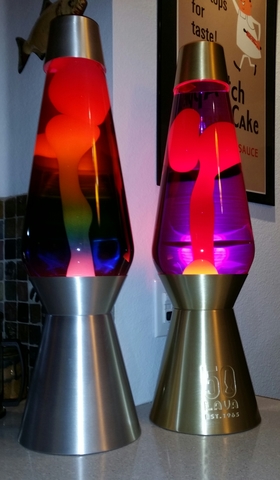 Im getting the 50th Anniv. as my 1st grande!!!  Going to wait until the cooler weather though....I haven't really been doing lava and my black/orange has been the only new lamp in awhile.....

Crit, why can't one run the grande on the same dimmers that I use on my goo kits for my 60 watt bulbs.  Is that dimmer not enough volts to handle the bulb wattage of a grande?

Permalink Reply by Critter on August 23, 2015 at 12:47am
Carol. You can run those dimmers I just prefer a built in and I think the Grande should have one from the factory as part of the lamp. In the second pic above the Rainbow is being run with a small 300 watt dimmer like you use.

I just got both as well. The globes look great!  My rainbow has 2 patches where it looks like the color rubbed off in the packaging, (about the size of a pencil eraser head) but other than that, they look amazing.  Cleanest globes I've seen.  I can only find 2 air pockets, and I really have to hunt.  Very nice!

Still heating up, so can't comment on the laval / flow.  Both are a little cloudy, but I'm hoping they clear up after a few cycles.

It's been really hot rax!!!  I think you have a good chance of those clearing though.  I got my black/orange Halloween lamp from spencer's and it too arrived a tad hazy, but after a few good runs, it cleared up.

Ya know, I really wanted the 50th anniv. to be my first grande, but now that I received a 32 oz rainbow lamp as a happy gift from Crit, I kind of want a rainbow grande!!!  My wait is for cooler weather though and I will order direct from LL.  I'm sure they will make good for anything that isn't right.

P.S., My one big wish would be that I could find somewhere that I could see these lamps up close and personal so I could inspect the globe like I do at spencer's when I go to buy a 52 oz.......I really don't know why spencer's doesn't sell these, at least around the xmas holiday.......guess not enough demand for the grandes.