CUDJOE KEY, Fla.-- Florida Highway Patrol officers say Megan
Barnes crashed into the back of a pickup truck because she was
distracted while driving, but not because of talking or texting or
changing the radio channel.

She was distracted, according to officers, because she was driving while shaving her "bikini area."

Barnes was in the driver's seat, quite literally on the razor's edge, while her ex-husband steered from the
passenger seat. She was driving in Cudjoe Key, Fla. to meet her current
boyfriend, presumably the reason for the 65 mph "landscaping," as
officers called it.

She crashed into the pickup, then drove another half mile before finally being pulled over.

Barnes was also driving with a suspended license, just one day after she was
convicted of driving under the influence.

Her hair-raising - or rather, removing - highway antics now have her charged with reckless
driving, driving with a revoked license, leaving the scene of a crash
with injuries, and driving without insurance. No one was seriously hurt.

"She said she was meeting her boyfriend in Key West and wanted to be ready for the
visit," Dunick said.

Just in the knick of time. 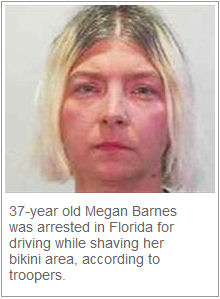