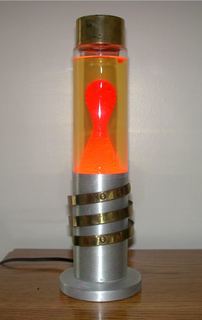 Price (at time of sale):  Unknown

This pretty and rare model used the same globe/cap as The Consort, set in a straight cylinder. This sat on a 1/2" tall, 4" dia. support. Encircling the base, the "three" bands were actually one single band of gold-tone metal perhaps 1/2" wide, bent around the base in a three and a half turn coil. This coil stood 1/2" away from the cylinder all around. It was attached to the base by short posts, one directly above the other on the base, with goldtone "buttons" on the face of the band, an inch from each end. The upper post's screw also held an internal ring which supported the globe. The cylinder sat on a wide, round, 1/2" tall pedestal. The rest of the base was brushed silver, and the cap was gold-tone "to match the 'astral' bands". This model stood 13" tall. The metalwork on this lamp is of unusually high quality.

There is a Mathmos model that goes by the same name.

Photo of the Astro Lava Lite here and here.