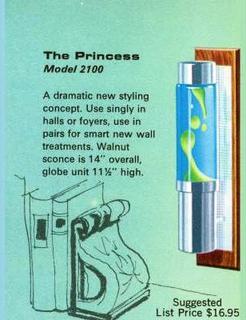 This was a cylindrical bottle, as was used in The Continental, sitting in a cylindrical cup with a wider top to support the bottle. On the bottom of the cup was a rotary switch, and at one side it was attached, via a short metal stem, to a tall, narrow rectangle of American Walnut, inset with a panel of silver-tone plastic having a small grid pattern. It was provided with a special hanging bracket. The metal was satin silver.

This lamp was 14" tall and used a 15 watt intermediate base sewing machine bulb.

There is some confusion regarding the name of this lamp. The 32oz. white base series is also called the Princess.

At this point, we don't have any pics of The Princess on Oozing Goo.