This was Lava-Simplex's second venture into the glitter realm. This style used a  mylar glitter and trichlorotrifluoroethane (Freon 113). This fill is commonly called a "fast glitter", and variants of it were used in lamps produced in the UK, in France, Italy, Germany, Russia, Scandinavia and Taiwan. Like the 60s Glitterlite, convection currents drive the glitter around; in this case, glitter consisted of square flakes of mylar with a chrome-like coating. The lamps were provided with a sticker that could be placed on the underside of the globe, printed with transparent color stripes to make multicolor effects on the glitter. The earliest ones used red, blue, yellow. Later ones added green. This liquid is NOT "user-friendly", and has rather nasty fumes. It evaporates quickly. Do not open these. Trichlorotrifluoroethane is no longer produced due to it being known to be one of the biggest causes to the ozone hole in our atmosphere.

More notes, per Jonas:
If one wants a truly rare GemLite, I'd put my money on the Confetti models introduced in addition to the 650 in 1990 and discontinued in 1992: the 642 and 643 (black base, silver glitter, hot pink and dark blue liquid respectively) are very rare, and the 700 (brass base, gold glitter, clear liquid) has never been seen! The GemLamp (650 with table lamp) is rare. Also the Continental 853 and 856 (never been seen) which I believe are supposed to be silver glitter, colored liquid - they're listed on a 1987 price sheet with DISCONTINUED over the info, with the actual details covered by the word actually edited out so you can't tell what those were (the 850 says "multi-color effect" and "clear" liquid, and since the other two say "silver" under glitter I assume they had colored liquid). The Capri series GemLite was the "International" model 450. Silver base, silver/clear. 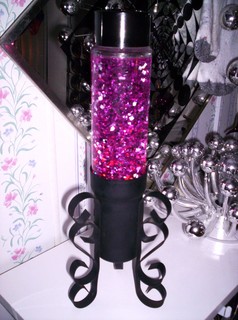 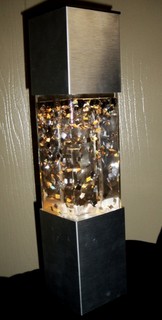 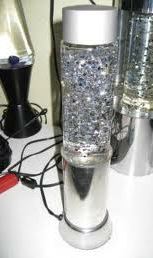 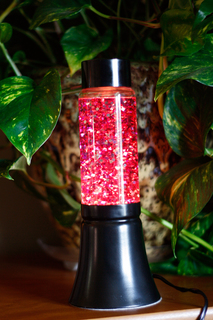 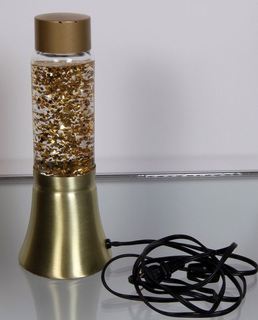