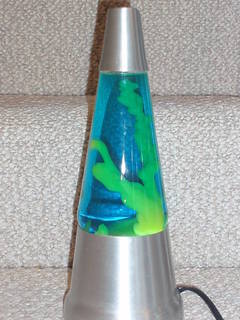 Made by:   Lava Lite

The only US-made 20oz lamps. Blips were produced right at the change-over from USA to China and, if I remember correctly, were sold mainly at Wal-Mart and without the Lava name. Yes, the gold-capped ones flow better, are better, all around. I believe these were the first 20oz. lamps. Previously, Lava was making only 32oz. and 52oz.