Global Mystery ;) (Sorry I could not resist) 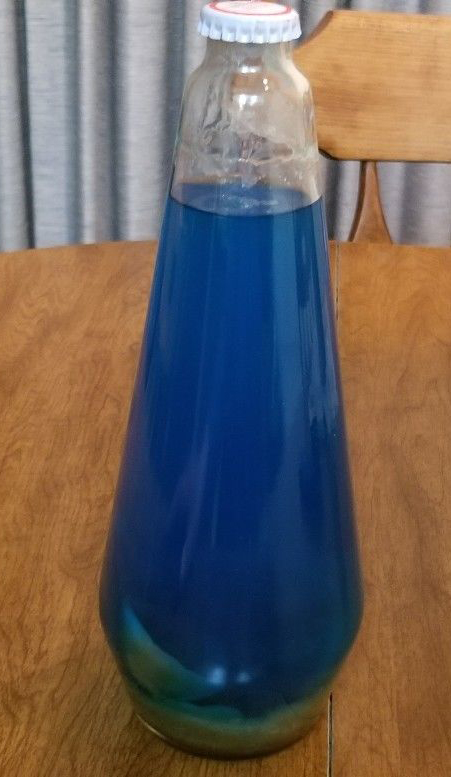 Can anyone tell how many oz this globe is? It is 9.5 inches tall if that helps, please & thank you!

No, you want the wax fully liquid so it pours easily with no clumping.  There is no need to overheat the wax though.

Time to pour in the wax, is this TOO molten? 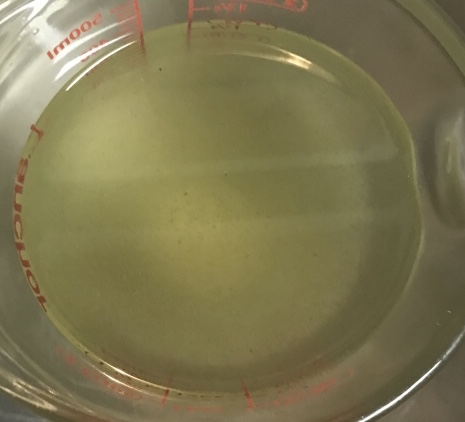 Thank you very much, Keith. I think everything turned out fantastic.

Here are some photos of the process for everyone to see how it went.

I filed the smaller globes with the old black and horrible smelling wax. 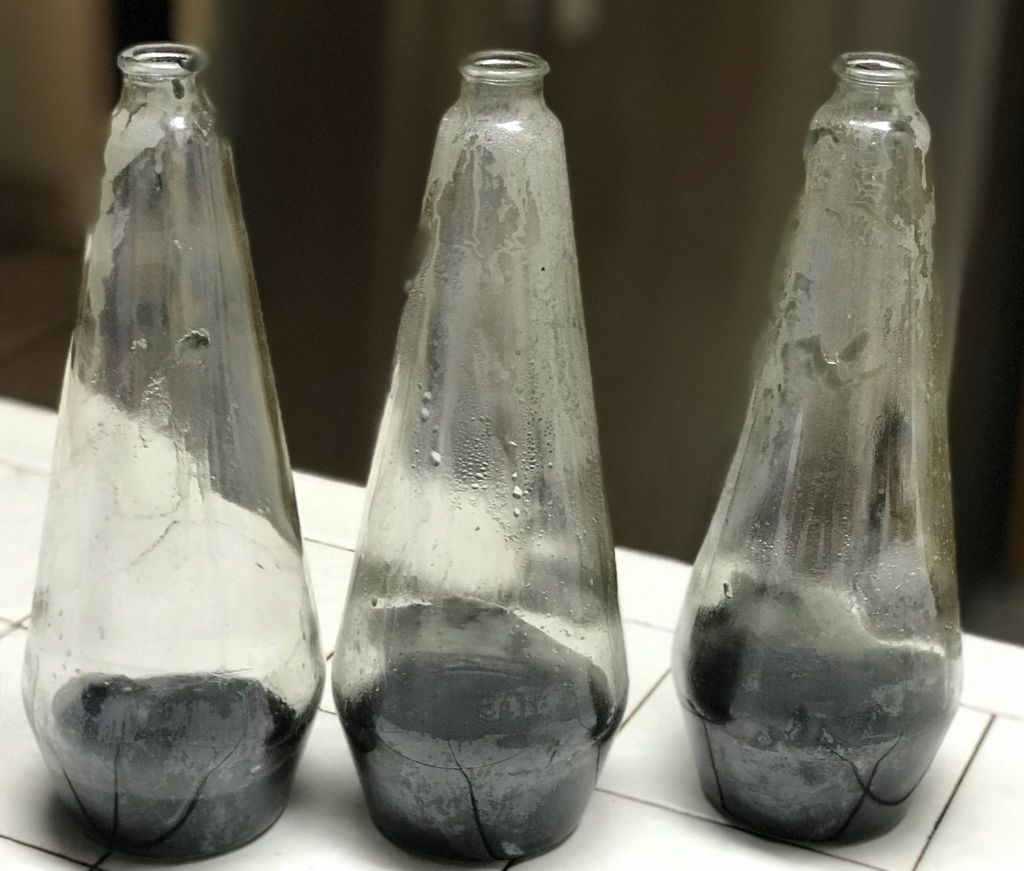 The 52oz globe being cleaned with almost boiling water. I used a turkey baster to pull the hot water out of the pan and into the globe. I used the small glass pitcher to refill the pan with hot water from the sink. 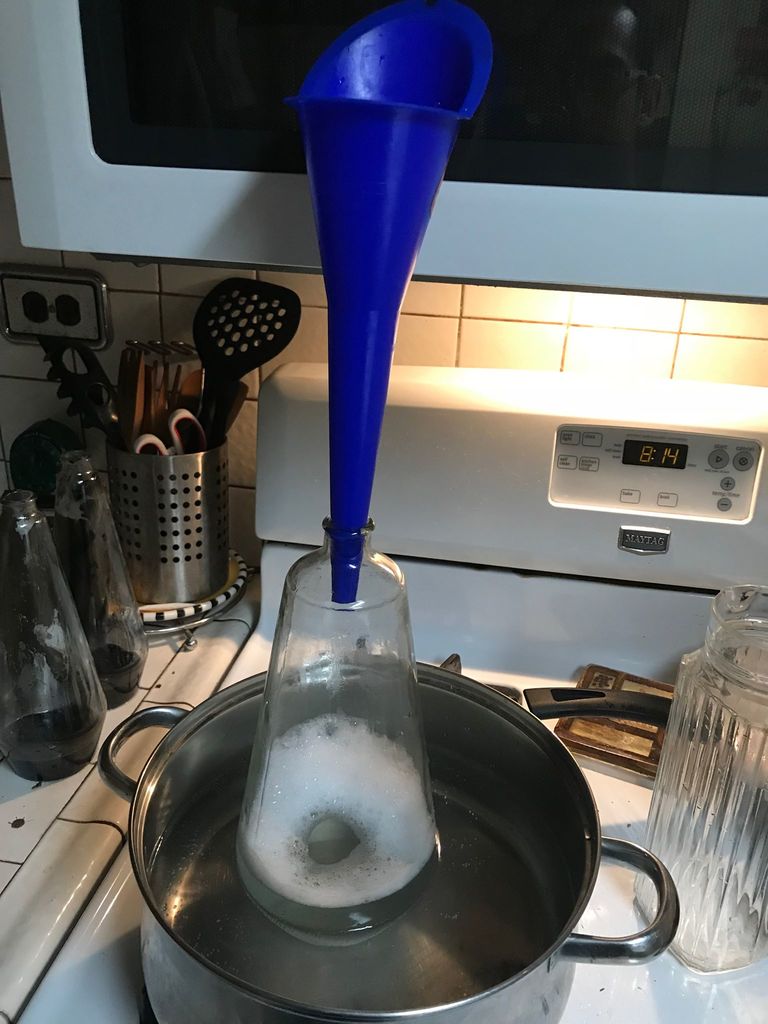 Inspecting the white wax to see if it is the shade of white I was hoping for; white with a hint of yellow. More on that later. 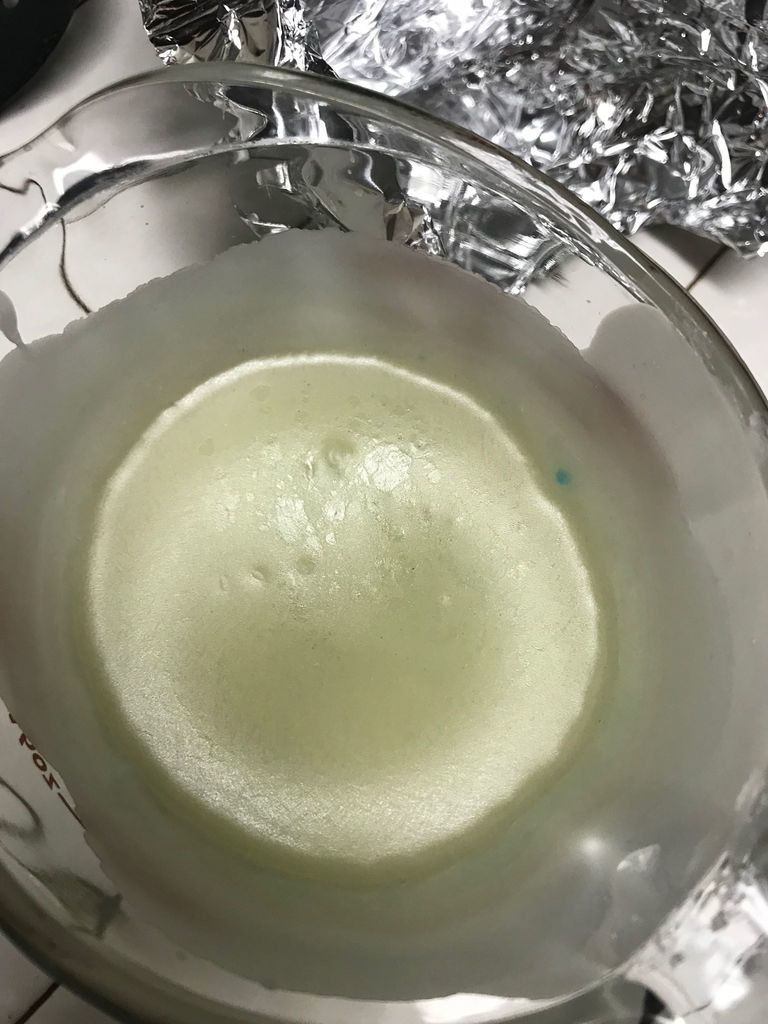 I added a bit of blue food coloring to the old liquid just for fun and to see what it would look like. I was almost tempted to use it because Cyan is my favorite shade of blue. The old liquid is on the left and the new one is on the right. 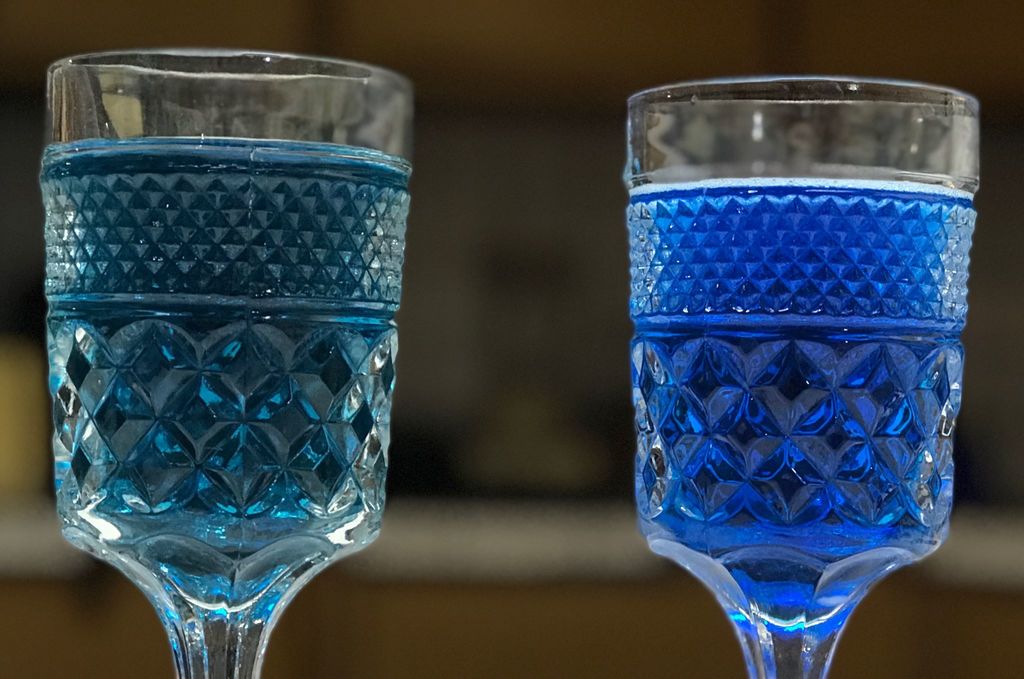 The inside of the globe after I scrubbed it with a bit of water, steel wool on the inside and a powerful magnet along the outside. I then went back and scrubbed it with a soapy wet paper towel wrapped around the steel wool. That really did not work very well. So I cut the bottom of the metal hanger (long straight part) and used it to push the soapy wet paper towel around to completely clean the inside.

Now the next day, I added exactly a teaspoon (two pumps) of clear hand soap and a few cups of distilled water. The globe is now all ready for the new blue master fluid. 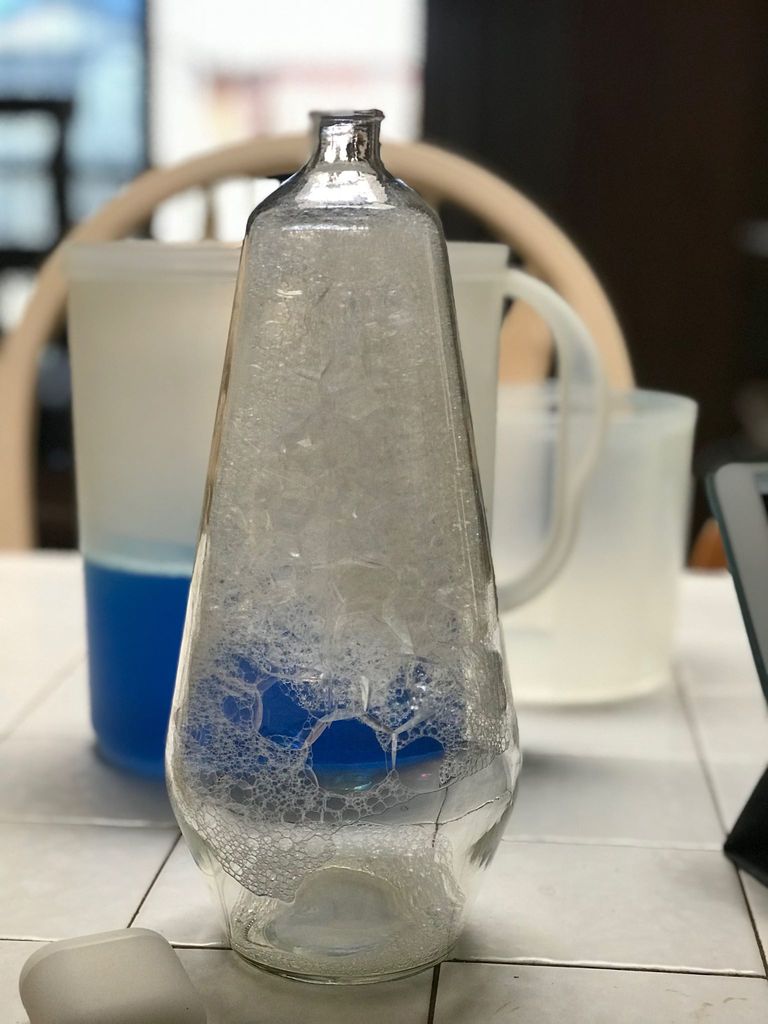 I poured in the master fluid but I filled it a bit too much to the top. I guess 1.5" from the top is not exactly right for everyone. Also more on that later. I filled it up half way but did not use a funnel to pour in the wax. Instead, I just VERY slowly poured the wax directly from the glass measuring cup. I had to reheat it a few times in the pan with the almost boiling water. It worked and I got about 98% of the wax out of the cup and into the globe. I did this to minimize the wax loss. A lot of the old black wax ended up inside the funnel. It took a lot microwaving the funnel and scrubbing the inside to get the wax out. So I did not want to have to do that again and lose more wax. 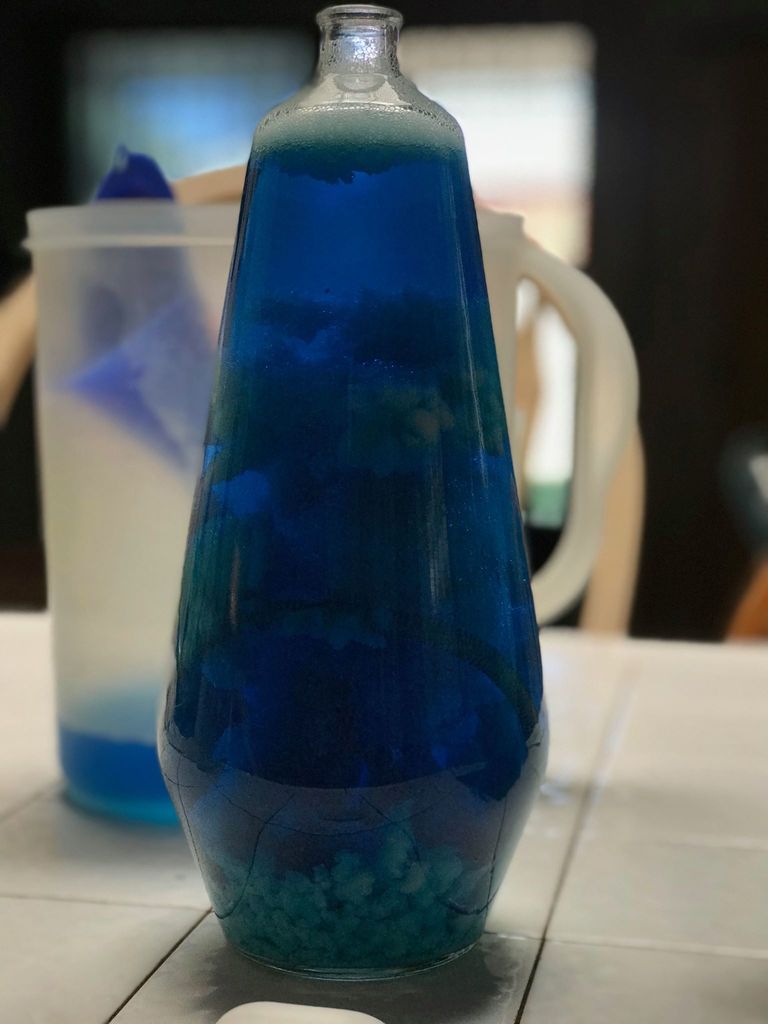 The globe is placed back on the base for testing. I used two coils from the smaller globes and lopped them together. I made the coil too large to fit at the bottom. I was also going to use the third smaller coil. I thought I put it in there but it did not make it in and it is currently MIA at the moment. 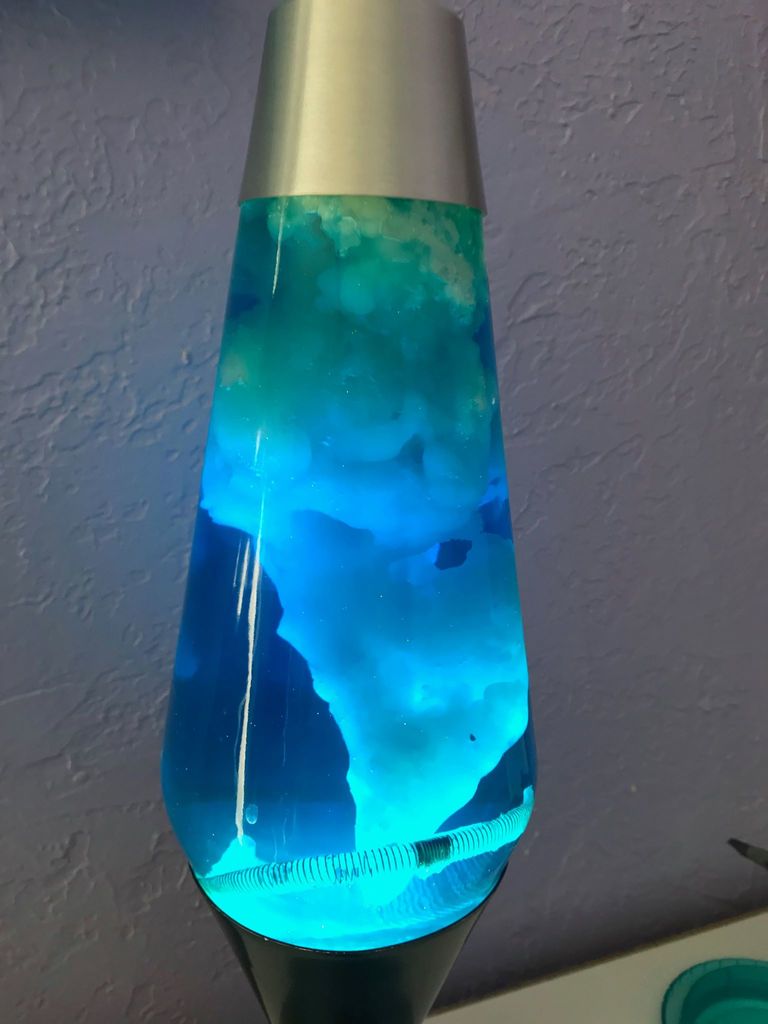 Remember when I said I added a bit too much fluid. The wax at the top was solidifying into this huge miss. Claude J said to use a hairdryer. So I put on some gloves and with my other hand held the inside of the cap up to the globe on the opposite side of the hairdryer to get it to blow more hot air back on to the globe. 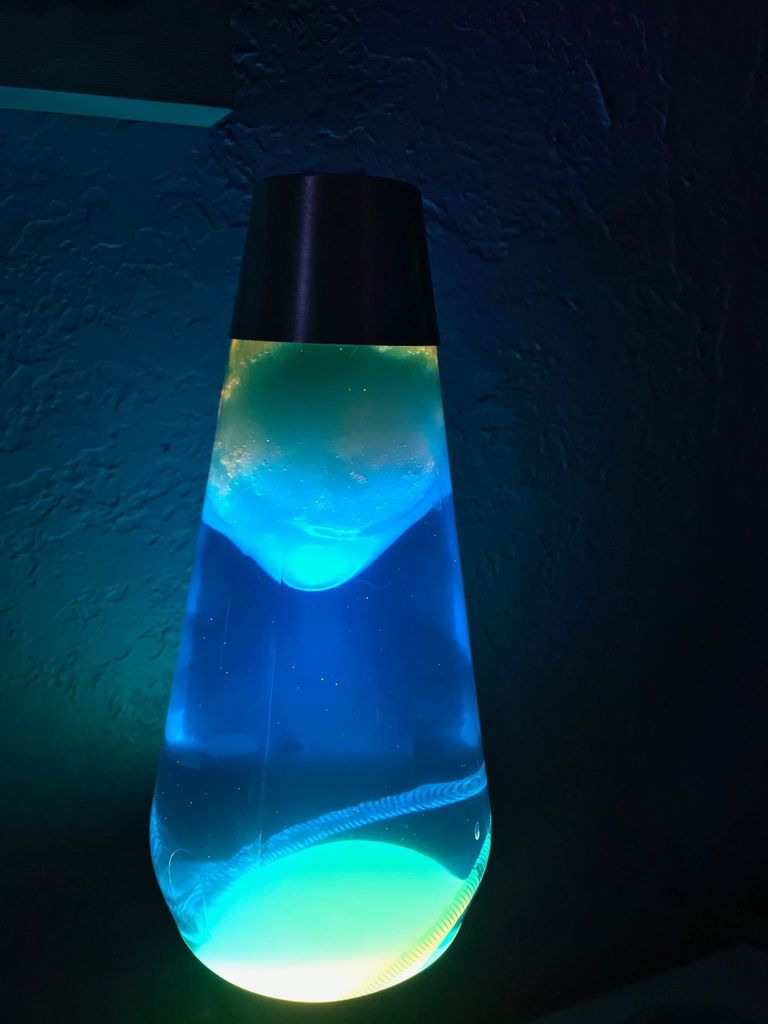 After about ten minutes of blow drying the top of the globe the wax dropped and started to flow normally. I found a long metal kebab stick in the barbecue supplies outside. I cleaned it with the clear soap and distilled water. I swung it around to air dry it. I sank it into the globe to push the coil further down and make a butterfly shape with it. I figured it would be a more efficient shape for heating the wax. I got a bit nervous because the wax actually followed the stick down. It seemed to accelerate the flowing process as I pulled it out. I cleaned the wax off the stick and put the wax back in the globe. Like magic, everything started working perfectly. 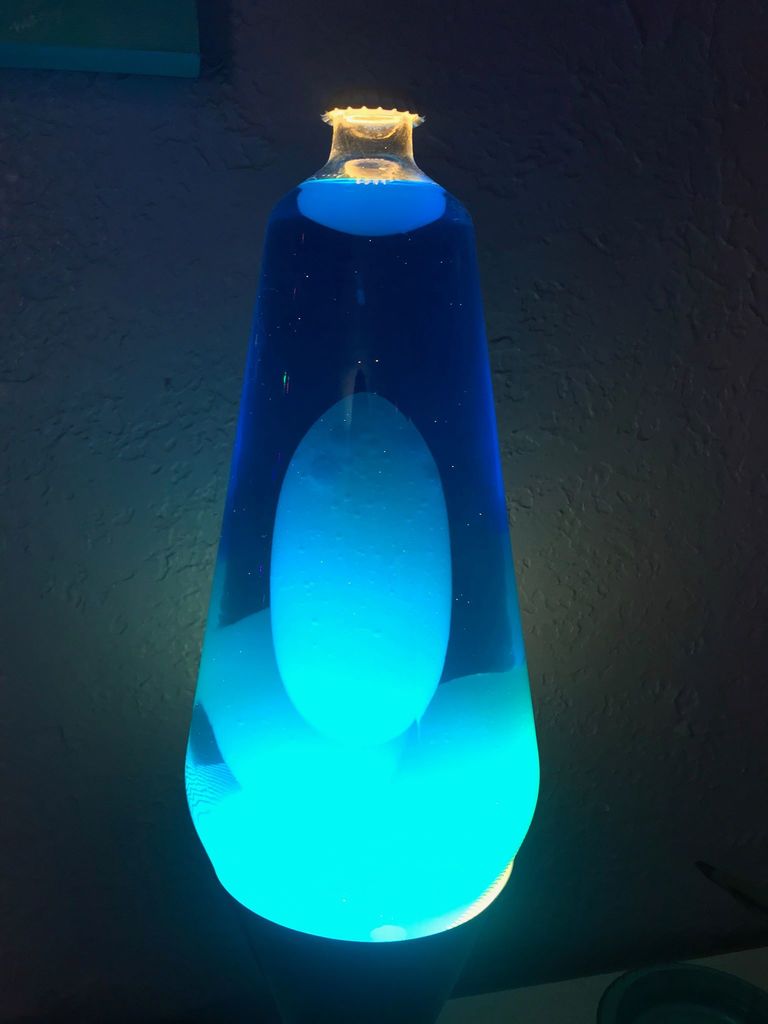 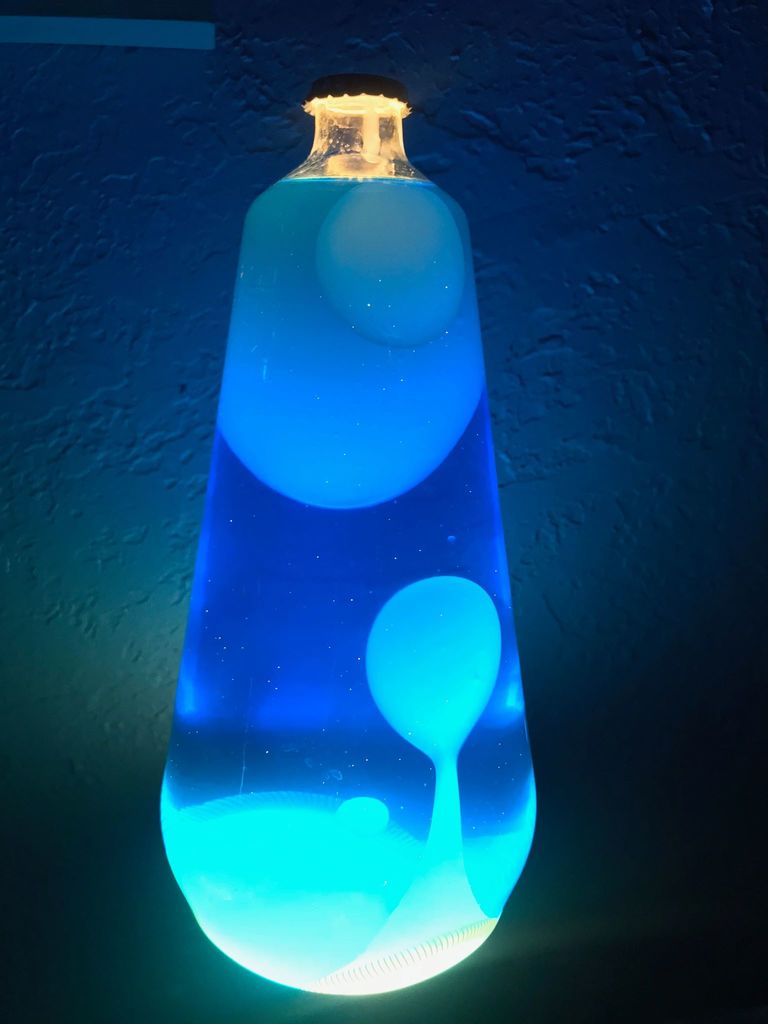 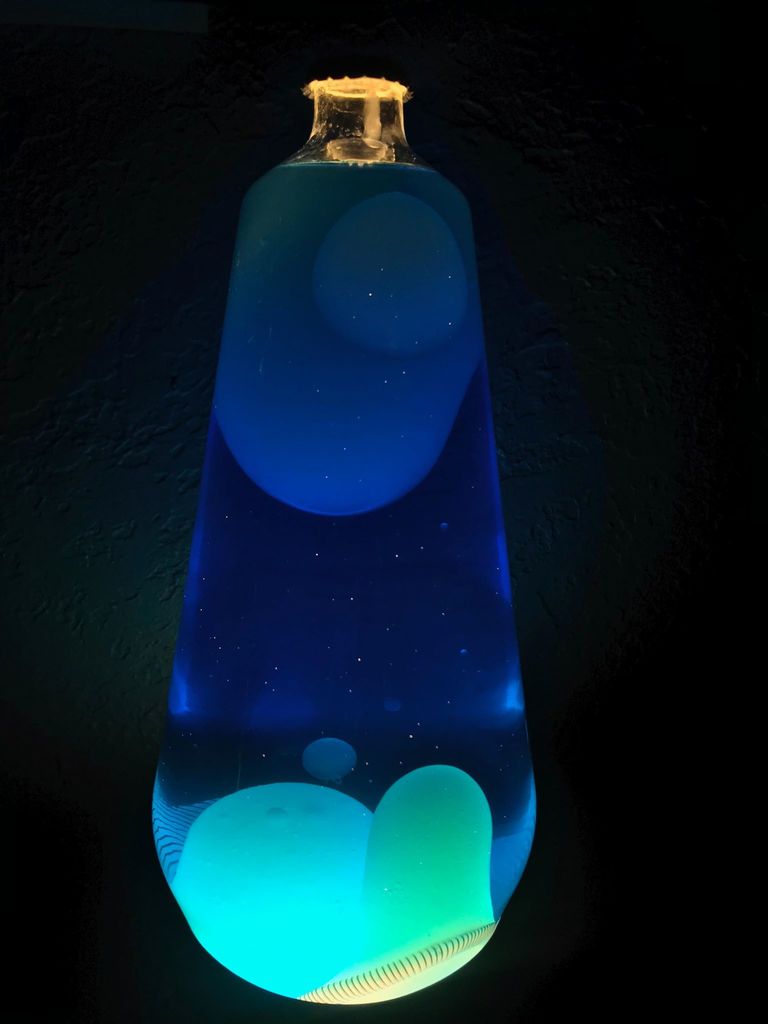 Claude J told me to run for until tomorrow morning. After the wax solidifies again I need to take out about .5" to 1" of the liquid to prevent messy wax buildup at the top again. Then run it again see how it goes. Not sure if I should pull out the coil and to make it a smaller circumference.

Now about the wax color. It is a bit more yellow than I thought. So it is not a true blue/white. It is not even a blue/green or blue/yellow. Instead, it is a strange hybrid of all three or as I would like to say a hybrid of my two original 52oz globes from 1997 and 1998. I might keep it this way or I might get a goo-kit with the exact color wax I want later on, I am not sure yet. 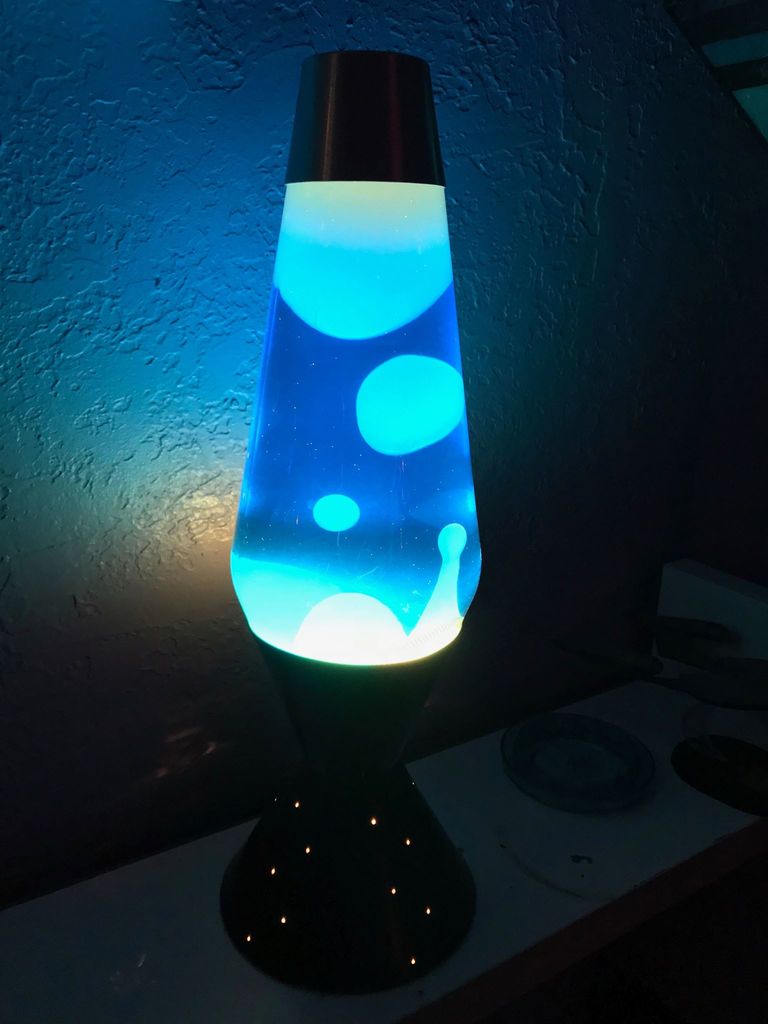 Thank you Claude J for talking me through this over the phone and many many panicky text messages. Thank you everyone on here as well. To think a week ago I did not even know what kind of globe I had or how special my base is. Nor did I have anything except a base. Now I have a great lava lamp and so much knowledge and experience. Now I am quite an expert when it comes to lava lamps. "Again, an expert may not be the exact right word, more expert-ish. Anyway, I've gotta go, look out for the dinosaur!"

(I had to sneak in some Ellen and UOE #EPCOTForever:)

looks good for the first time except for one thing

I didn't realize your coil was so LARGE in circumference!

I suggest you carefully extract it when hot and rework it to make it small enough to fit the bottom of the globe..

No luck finding a century base or a 52oz globe on this thrift store run either. But I did find this black metal 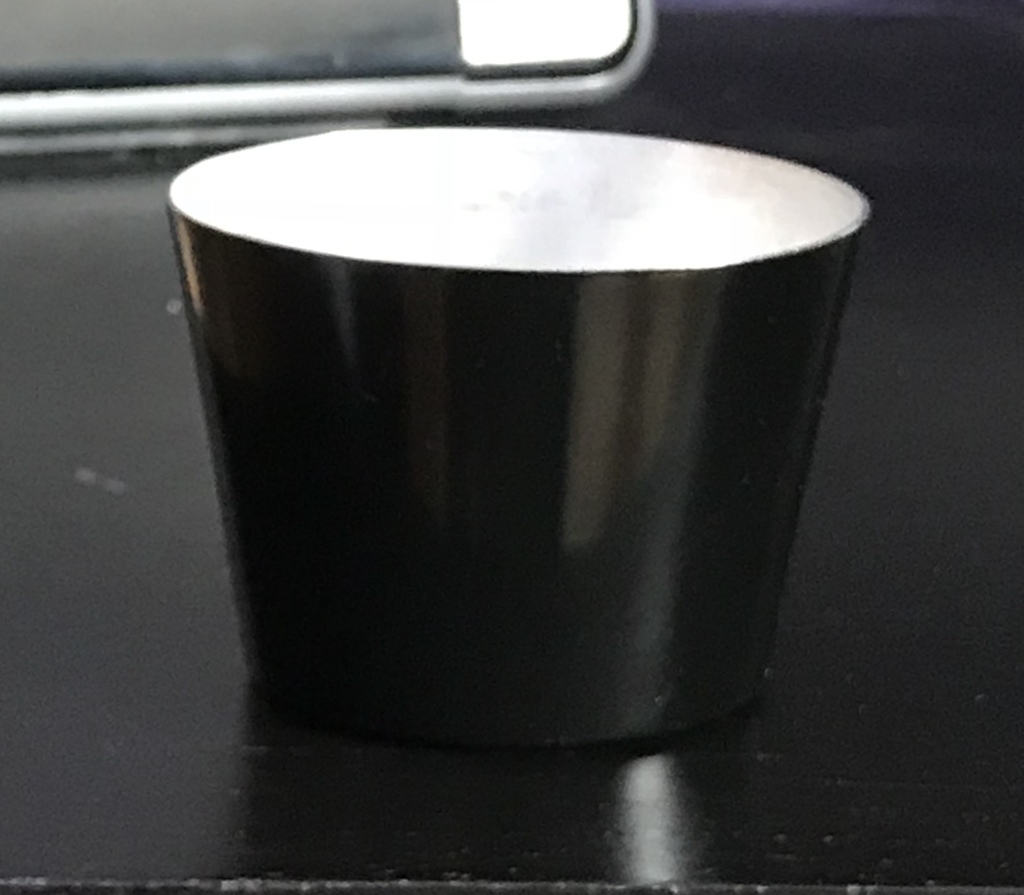 Mmmhhh..... looks just like the silver cap I own. 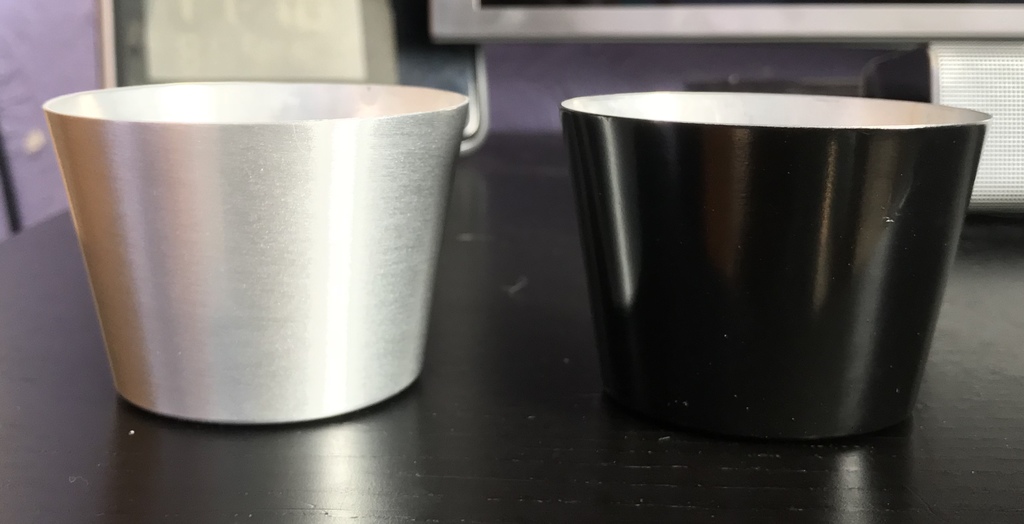 Well that has a nice look to it.

Can someone please post a photo of the type and size of pliers I can use to crip the cap back on. A photo of it sitting next to a ruler would be most helpful, Please & Thank You.

That is exact what I did. :)  Now I am considering cutting the top off of that cheap silver base and placing it inside the black base for symmetry reasons. 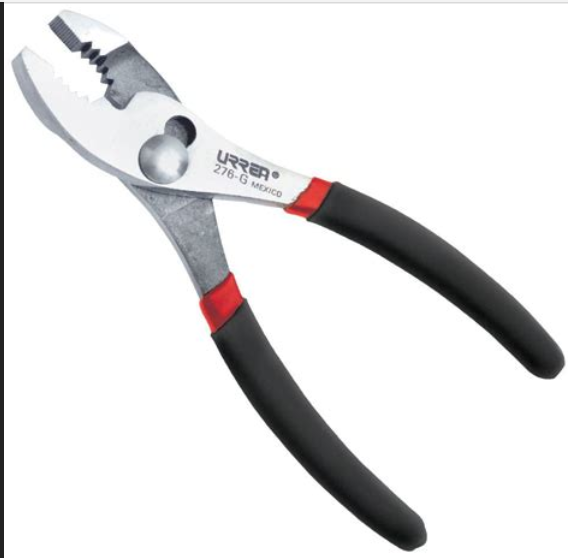 This might help, recapping is close to the bottom;

Can someone please post a photo of the type and size of pliers I can use to crip the cap back on. A photo of it sitting next to a ruler would be most helpful, Please & Thank You.

Thank you. Can you get screw clamps at Home Depot?

Thank you. Can you get screw clamps at Home Depot?

Funny that post did not get edited correctly, I asked which size to get.

I ended up getting this one: 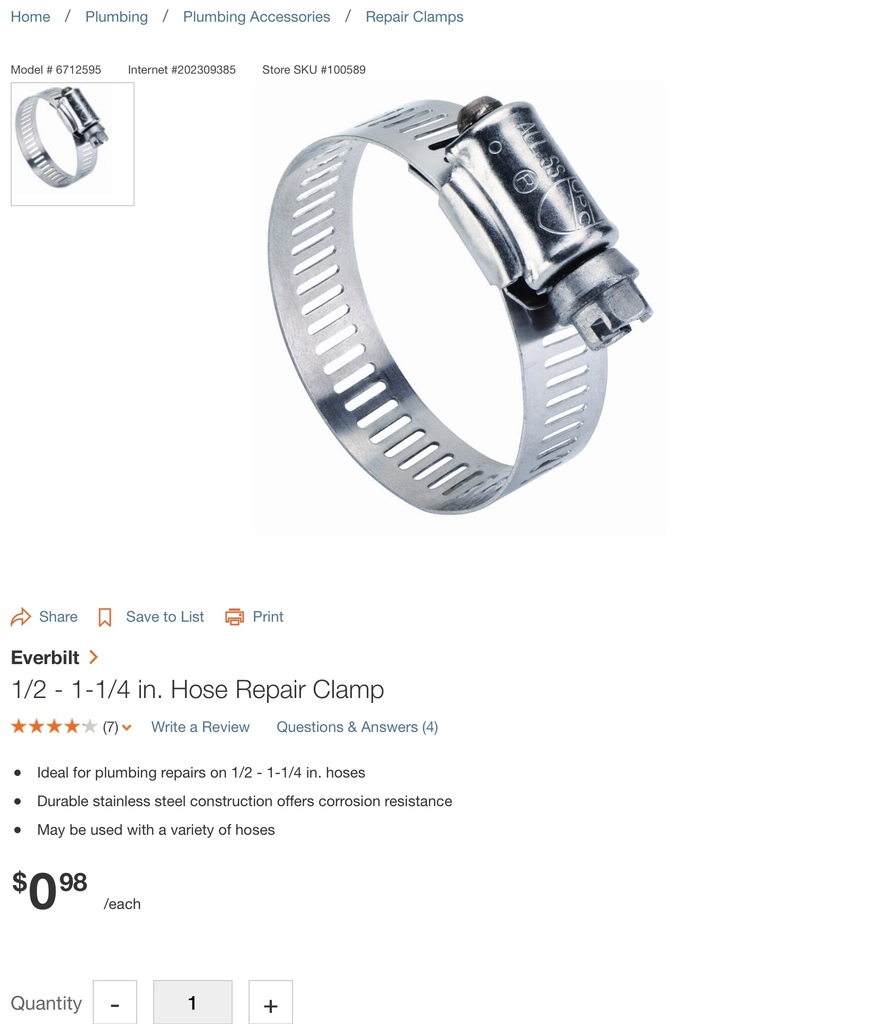 The hose clamp worked amazingly well. Well on the three smaller globes I used for practice. 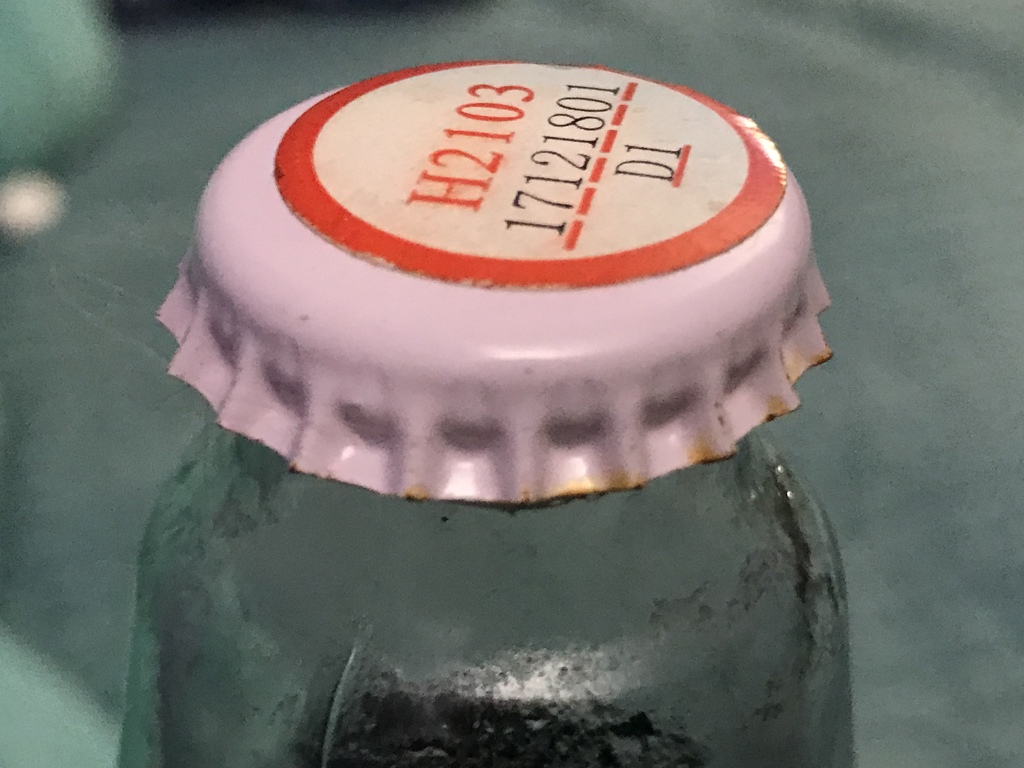 Before I used the clamp. 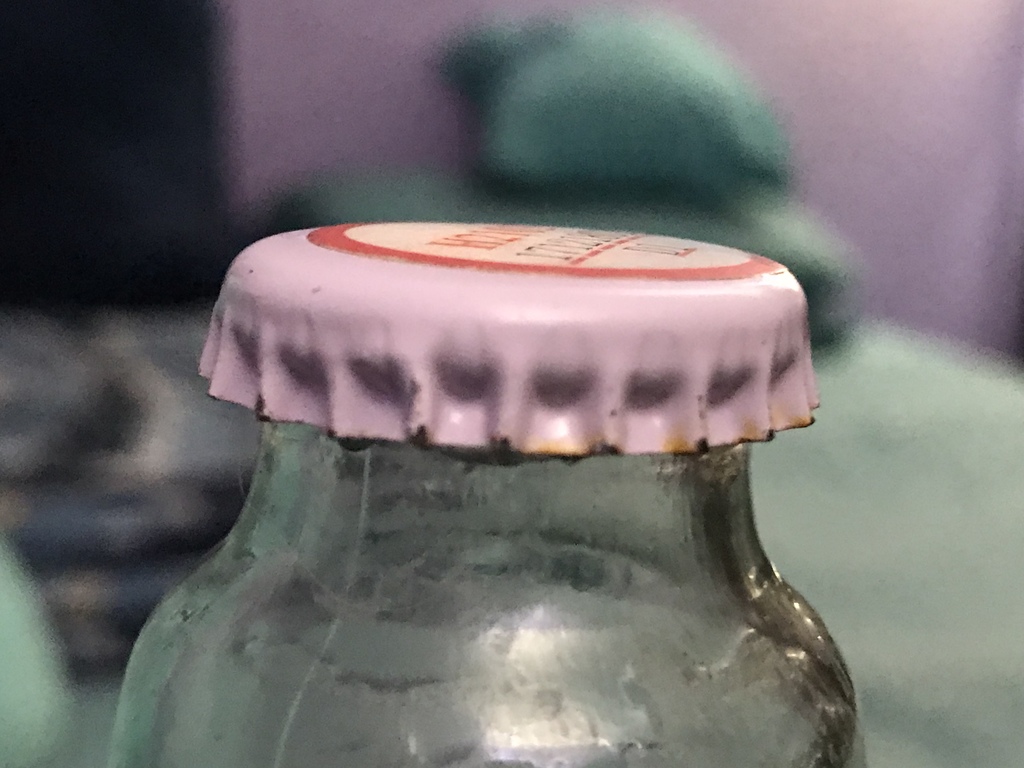 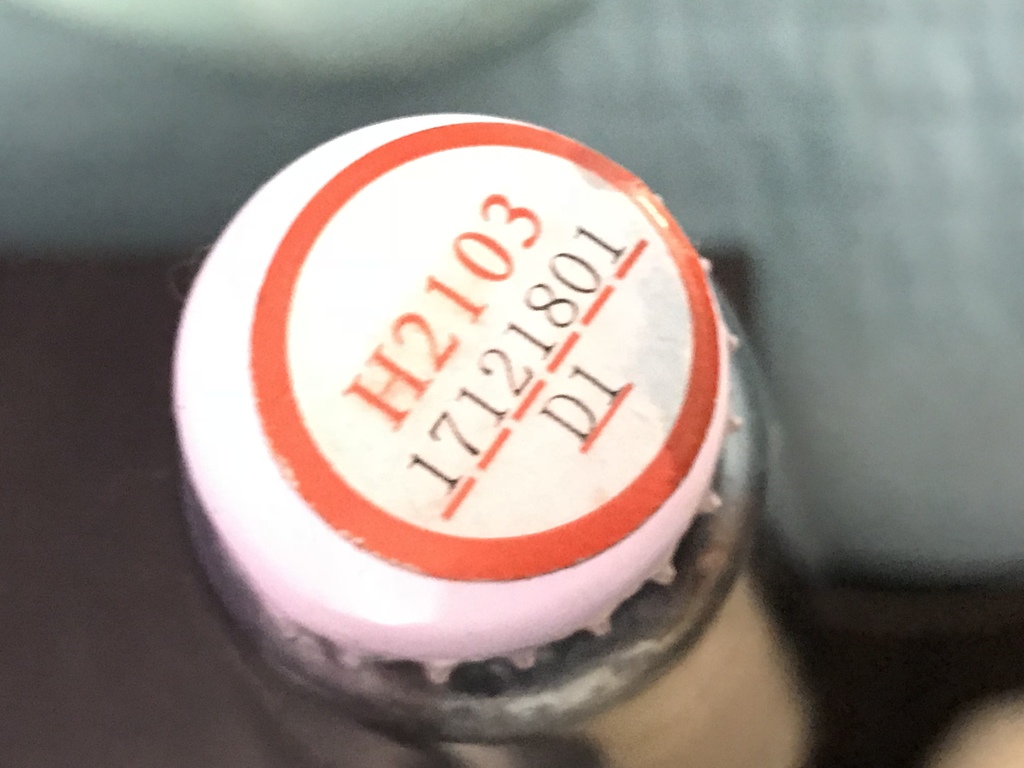 After I used the screw clamp technique.

I waited for the wax to erupt then pulled the globe off the base to remove the coil. I do not have any photos because my hands were covered in wax. I got two small plates; one to place the open globe on and the other one for the coils. Which I was happy to find that they came apart so easily.

I kept taking them apart, putting the globe on top of them and then taking them apart again. Until I got the coils small enough to fit on the bottom of on the inside or at least I hope I did. It is now almost a double looped coil now with about half an inch of a single looped coil on each side. I realized I should have marked the size of the globe before I started.

I put the coil back inside the globe and pushed it down with the metal kabab stick as far down as it would go. I then scraped as much wax as I could off the plate and put it back in the globe with my finger. Which was probably not the best idea now that I think about it.

The liquid was not too hot for my skin to handle. Hopefully, I did not contaminate the goo. I washed my hands with the same soap I used to coat the globe before I started. I loosely put the bottle cap back on the globe and placed the globe back on the base while it is on. I wonder if I should have let it run or turned it off to let the wax solidify again? 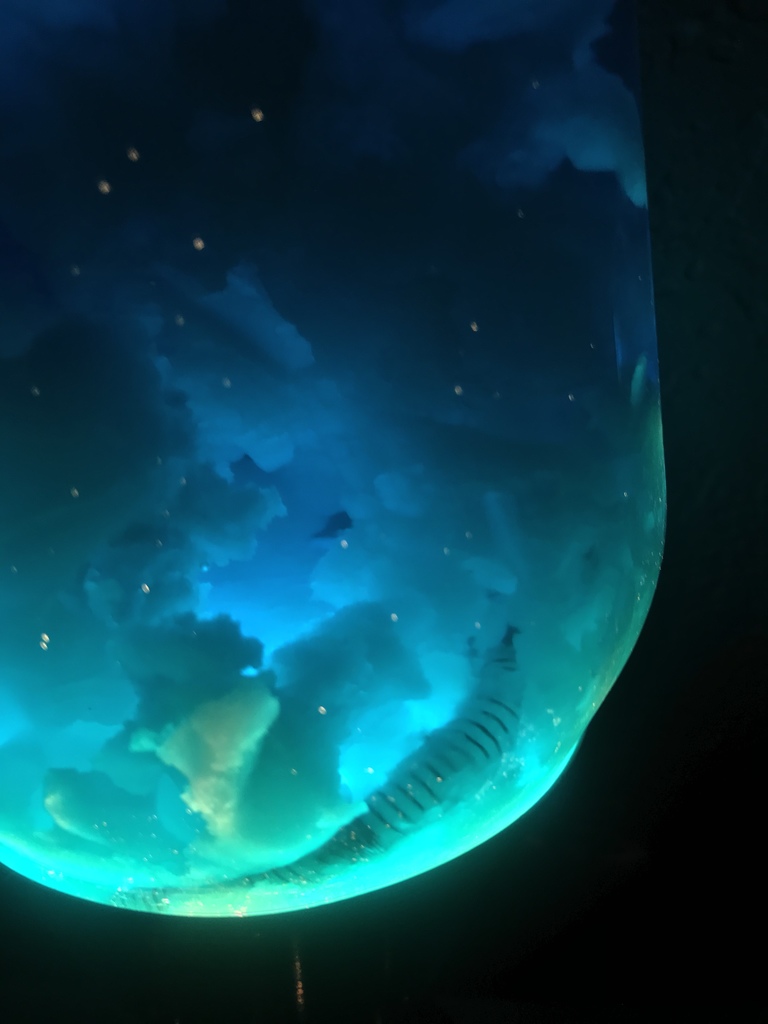 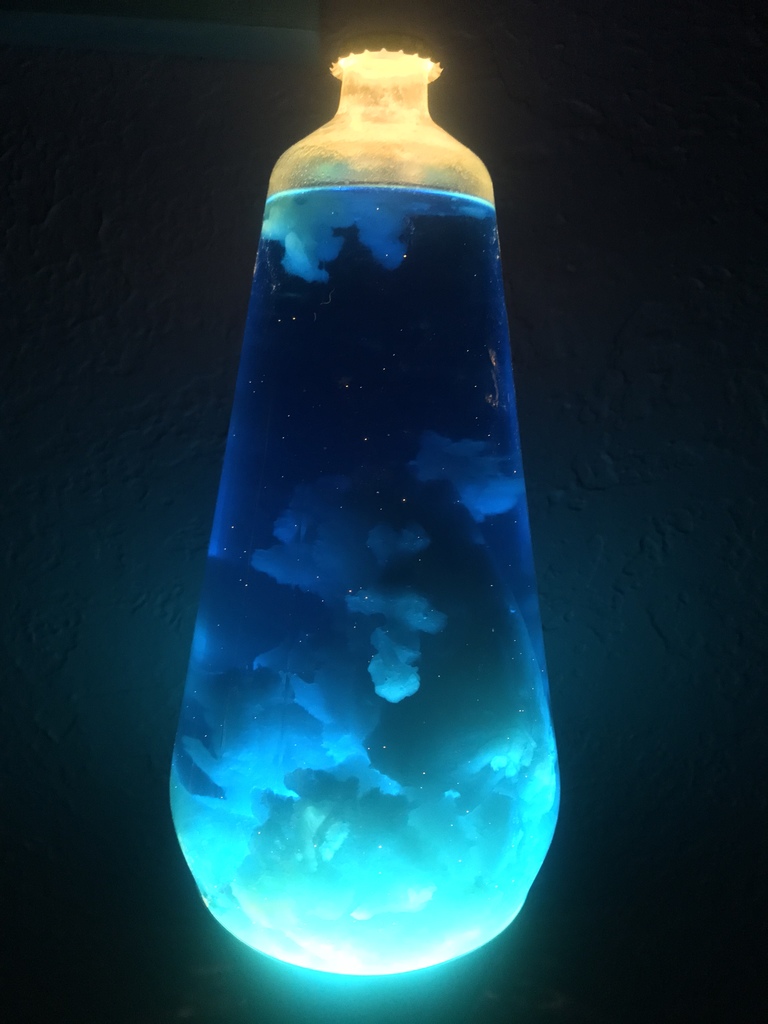 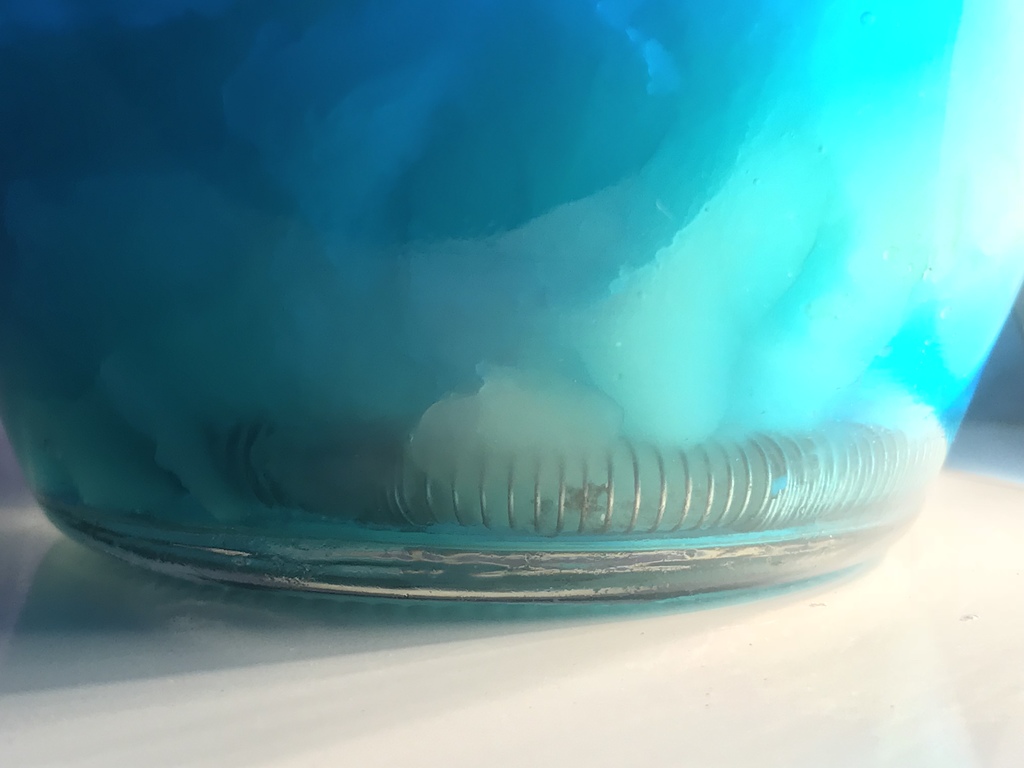 Wow, in the time it took me to write and edit this post the coil sank to the bottom of the globe by itself and surprise it fits! Everything seems to be working fine. Still a clear globe and not a sign of shaken globe syndrome.