How bad are Grande lamps ?

I have 6 newer lamps 17 inch. 7 70s lamps 5 are 52oz ones.  And i was thinking of buying ome of those huge Grande lamps.. but reviews of this lamp seem pretty bad.

cloudy water and so forth i imagine from shipping so ill ship it via amazon prime so i should get it in 2 days to minimize that..  But other reviews mention the dye in the water always disapears after a few months and the lava stops flowing after like 9 moths.

Seems pretty crappy for near 100$...  What are your guys experiences ?

Honestly its kind of luck of the draw! I’ve had some amazing grandes, and some very very cloudy/inactive ones. It wasn’t much  of a problem in the past  because Lava would replace if it arrived in bad shape. Not too sure of their replacement  policy now since they got bought out, but if its still the same id take a chance on it. Ive had great luck with custom grandes right from the LL website.

Well they are sold out in their own website.. not much to customize there with the options being low.. and it seems they are selling out elsewhere too.

Are they discontinued ?   Also amazon they are 70$ with 2 day shipping on their site they are 100$  and ground shipping

Well i bought my first Grande, got the purple/yellow one, i decided to pay the $16 for next day shipping.  Since its getting warm out i think 1 day shipping is better then having it rattling around ina truck for 3 days for normal shipping.  Hopefully i get a clear one, thats the only reason i did faster shipping

I have over twenty Grandes and if any arrived cloudy Lava Lite exchanged for free. If I purchased from AMAZON they have you return the lamp at their expense and replace it until it arrives clear.  Keep in mind with all lava lamps some arrive clear and some do not.  However those that do not arrive 100% clear usually clear up nicely after a few runs.  I've only had to return 1 and this was due to the 50Th Anniversary globe fading to a gold color.  It was replaced only to start happening again.  Not sure why the purple yellow combo fades.  I don't have any placed near a window  where the sun can shine and cause fading. I also had one arrive from AMAZON with the BASE all bent. They sent me a shipping label to return and sent me a new one.   Lava Lite ,Walmart and AMAZONS customer service is awesome. You better hurry up unless you want to start paying eBay prices for a grande which is a lot more than retail stores when you can find them.  Lava Lite has SOLD OUT on all Grandes except for a few remaining CUSTOM Grandes.  Once these are sold they may not ever carry them again.  Same goes for AMAZON and WALMART which is down to a few remaining and clearance priced at 79.00 / free shipping. Grandes have the best lava flow of any lava lamp in my opinion except for the  HUMONGO or Colossus which reign supreme.

Well i order the purple yellow one.. if it fades ill just pop the top and make my own volor with food coloring i guess.

Ive suspected they are discontinued being sold out everywhere.  I dont wanna spend too much on lava lamps like i did last month (couch 400$) lol but i have enough to buy a 2nd one.. You think i should ?

I got most of my grandes from Walmart and thus far, they all seems to be working very nicely. All walmart models I got were clear with no cloudiness. The one I got from Lava Lamp direct had problems that took several replacement bottles to solve.

I use them primarily on weekends and am happy with them to this point. None are 6 months old yet

well i get mine tomorrow hopefully its clear

I got it today.... worst packaging job ever man...  The base has no foam to hold it so it was rattling around inside its own box, had no lightbulb so i have to spend money on a lightbulb and i dont know which kind it needs either.  They put it inside a large box with no padding so the little box it was in was moving 1 foot left and right.. No instruction booklet either.  I wonder if this globe was a returned one.  Retarded

Also the water looks cloudy to me, If i hold my hand behind it i cant see my hand unless i hold the lamp in the light.   Its not as cloudy as some videos ive seen but deff not clear, peice of junk if you ask me..

What bullshit man, and i spent $16 for next day shipping to avoid this.

Can you take a picture of your purple/yellow lamp when off so i can see how "clear" this is suppose to actually be.   I feel like returning this thing and getting another but ill cycle it and see what happens..

Do you guys know what type of light bulb these take ?  Mine says its built in 2017 so i wanna know for sure and get the right bulb, ive heared of these lamps exploding with the wrong 100w bulb

Aparently this shit company has no contact email or anything..  cant contact them on ebay either..   Ima just return this, they dont include a light bulb and ill be damned if ima spend $100 and then have to spend another $15 for a light bulb..  Screw this

Called amazon, told them whats going on and they are sending me a replacement next day air shipping, so ill get it tomorrow, hopefully this one isnt cloudy and actually has a light bulb so i can frigging use it.

If it doesnt, ill have them exchange it again and again until it does, they also told me if it doesnt have a bulb they will remove the listing from amazon and check for false advertisement as far as the light bulb is concerned.  Im the wrong guy to piss off and short change..  Reffering to lava light company not amazon

Not sure why anyone would pay $15 for a Grande light bulb?

Experienced lava collectors know that LL ( or whatever they call themselves now )  has no quality control.

The company went downhill quickly after they moved their production to China.

Purchasing a lamp from them now is unwise unless you like to gamble and don't mind spending time/effort to return bad lamps.

Its always best to purchase/ship lava lamps in the Winter when it is cold outside as lava lamps will most likely become cloudy if shipped during warm weather.

The wax didnt move around i can tell.. Nothing is on the glass and it didnt melt.  I shipped it overnight.. So it left yesturday at 11pm.. and got here by 7am out fir delivery so it wasnt out in the heat or out for days on a freight truck driving accross country.

you forget being shipped in a container ship accross the globe..  Thats probably what did it.

Regardless.. The thing didnt have a light bulb and im not spending 1 penny or 7$ on a bulb it should have come with..  Thats like buying a new car but it being empty on gas..   They say it comes with one so id expect one..  Also the base and top on inspection have dents in it.  the top is really bad though its got a round dent around 70% of it.

Its cool. amazon sent me a new one.. next day air shipping like i paid for on this one.  And ill get it tomorrow.. If this one has no bulb and is cloudy ill ask for another one..  If its clear and has no bulb i guess ill settle for it and buy a bulb...  But to be honest if this happens again.. and then a 3rd time..  Ill keep both lamps and give them the finger..

Im not inexperienced persay..  I knew the risk of cloudy water was there.. but not dented bases and tops and missing light bulbs.. You should habe seen the way it was packaged...  Thr box amazon put it in was so big it was slamming left and right 1 foot or more as the ups guy picked it up i heard it bam slam to one side of the box..   And the padding inside was a peice of brown paper.. thats it.

Here isa pic of how cloudy it is.

Im generous and used flash so you can see my hand slightly.. but without it isnt clear.  If i had a damn bulb id cyle it for a week but i dont and im not oaying for one.. and waiting a week for it to arrive.. f that.  Also if you look on the top you csn see the dents in it.. the flash hides alot of it but you can see it 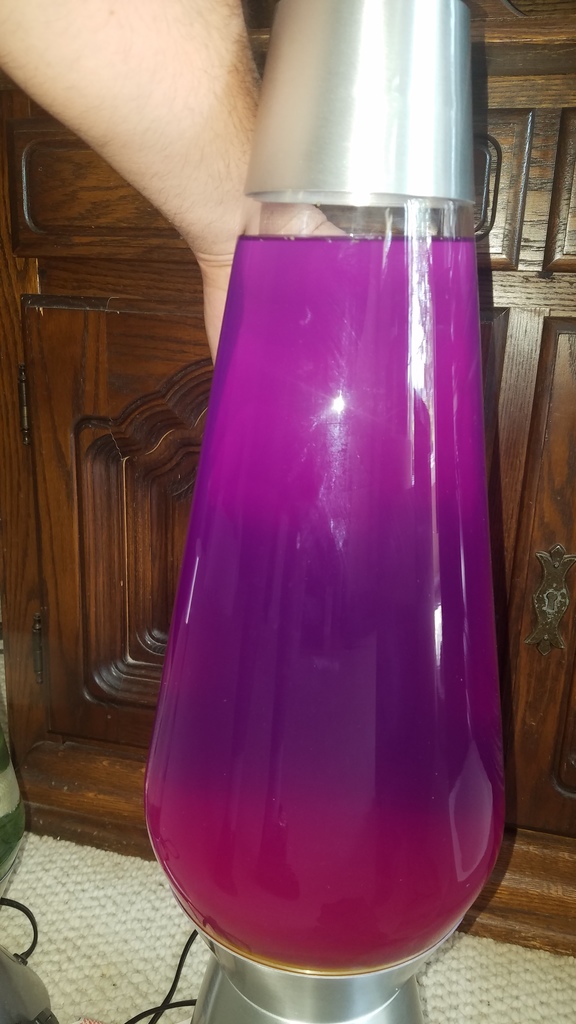