hey folks i need some help. i won a blue/yellow hot rock from '03 for $5 on ebay that i'd been watching for a while and in the pictures it looked really clear and like it didn't have any sticking wax. long story short, received it and it already had wax all stuck on the inside and then on the first run, it started riding the glass and a huge glob got stuck that i managed to shake off but it left a stain, big gross splatter, that won't come off. once shaking it off, it started flowing like a champ and hasn't stuck anymore that i can tell, but the globe looks gross. 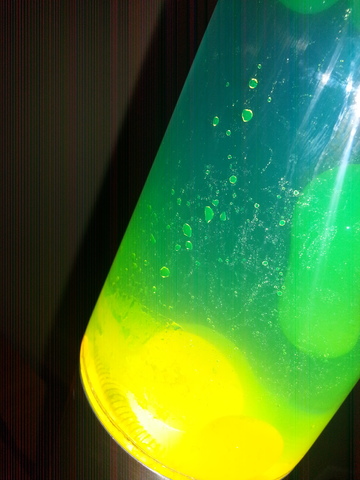 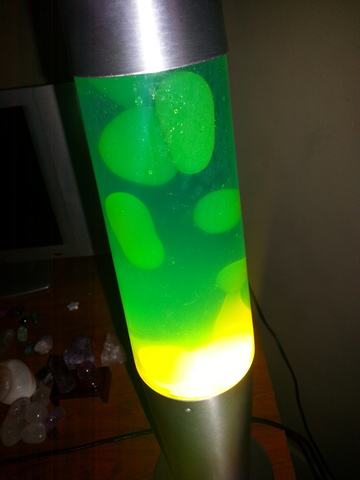 it looks worse in person, not so bad from a distance, but up close it sure looks funky. i knew that this was a possibility with the hot rocks when i bought it, but i was so hoping i'd get a good one lol. so i need some help. i've done some looking and have heard of people just opening them up, cleaning up the globe, adding the water back and then putting some dish soap in to stop the sticking. i'm just wondering what the best way is to fix this thing. i really am in love with it even tho its a little nasty looking, the flow is SO great! i can barely get my chinese lava brands to move anymore, but this one is roaring! i'm also interested in adding some food color to it to enhance the green, the water is blue right now but all lit up it just looks green and the wax looks yellow at the base and lime at the top. 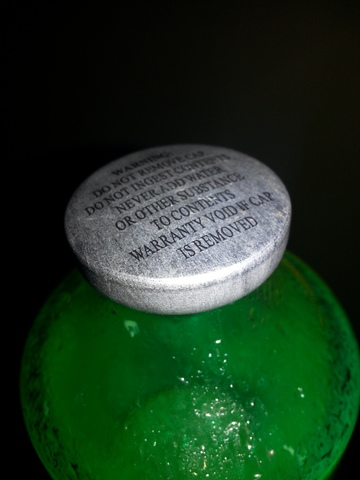 so here's the cap, idk what to do with this thing, and am wondering the best way to go about opening it. i've opened the bottle cap types before, but never encountered this one. i've got a husband who thinks he can do it, but i don't want it broken. i know some people have opened their hot rocks, so i'm wondering if anyone knows the best way how without destroying the bottle, i already know i'll probably have to cork it back up because the cap will be destroyed. i've also got a glitter hot rock that i'm dying to get into as well, to add some food coloring and it's got the same cap.

so yeah basically if anyone can help me that'd be great! 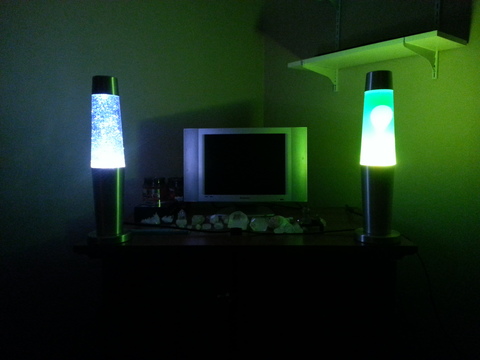 and here they are going together! i LOVE the design of these lamps! the glitter is fabulous, lacking color but pretty dang cool. the lava would be so cool if it just didn't have issues. i'm also probably gonna paint the green one's base black!

With the lava one, you should try running it for awhile.  that's if you really don't HAVE to open it.  Once you redo it with the water and the dish liquid there is a great chance that you won't get the same flow.  There is also the chance that it will cloud up worse then when it was.  I tried to redo like 3 lamps like this and they all totally clouded back up worse.  I mean where you couldn't even see them.  One was like cottage cheese inside.  I then ordered new goo and did goo kits on them.  www.gookit.com

well, we ended up opening it, whcih turned out to be surprisingly easy, and i just emptied the water which wasn't cloudy, there was just nasty wax all stuck inside the globe, and i put it in a pot of water on the stove and got all the wax to melt down to the bottom and off the inside, got it looking pretty clean, let it cool and blah blah and then just put its original water back in and added dish soap. put it back on the base and let it go and it stuck worse LOL, it started running up the side of the globe and bubbling and now its A MESS. i've officially given up on it and am probably just going to go to gookits next...

people weren't kidding when they said hot rock lavas were junk LOL..the glitter one is pretty good tho