Boiler or Geyser lamps (Chinese, not the French ones) 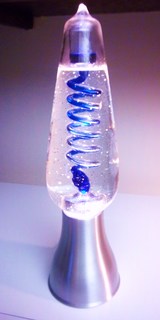 Made by:   Lipan Industrial Company (not sure though)

Per Jonas: This is a "geyser lamp", made in Taiwan, sold in US and UK, and less common actually than the average old French boiler. Why? They broke in shipment - to stores, to buyers, etc. And most I've seen in collections got broken, too. They came in two sizes, small and large; small with black or dark translucent blue plastic bases, large (shown here) with metal. Both sizes then came in three shapes: cone (shown here), hourglass, and football.

Picture courtesy of Wizard of Ooze.