Cant get your consort to flow after a refill? This is why.

I have spent the last few days trying to fix my consort. Many people have tried and failed to refill their consorts and now I know why.

My consort was missing about an inch of liquid so I poured some liquid from a 32oz screw cap yellow/red and the lamp no longer flowed. I did a lot of testing with a hydrometer and I found out that the liquid used in consorts is four times less dense than most of my lamps. The vast majority of my lamps came in at a density of 1.0381 kg/m3. While the consort only flows at a density close to water at 1.000 kg/m3.

So what does this mean? I have not tried this but I think it may work. If you have a consort with the original wax but not the fluid you can use any usa made lava lamp fluid if you bring its density to 1.000 kg/m3. This also means that changing the wattage of your light bulb will not help you!

So what you need to do is get a hydrometer. Use it to measure your fluid to see how dense it is. If its denser than 1.000 kg/m3 you need to add more distilled water. If its less dense add more lava lamp fluid. Dont worry about ruining the liquid, since its normally about 70% water anyways.

If you do not have the original wax I am not sure what to do, I just wanted to put this out there for people who are having problems with their consorts.

Here is a before and after shot of the consort. 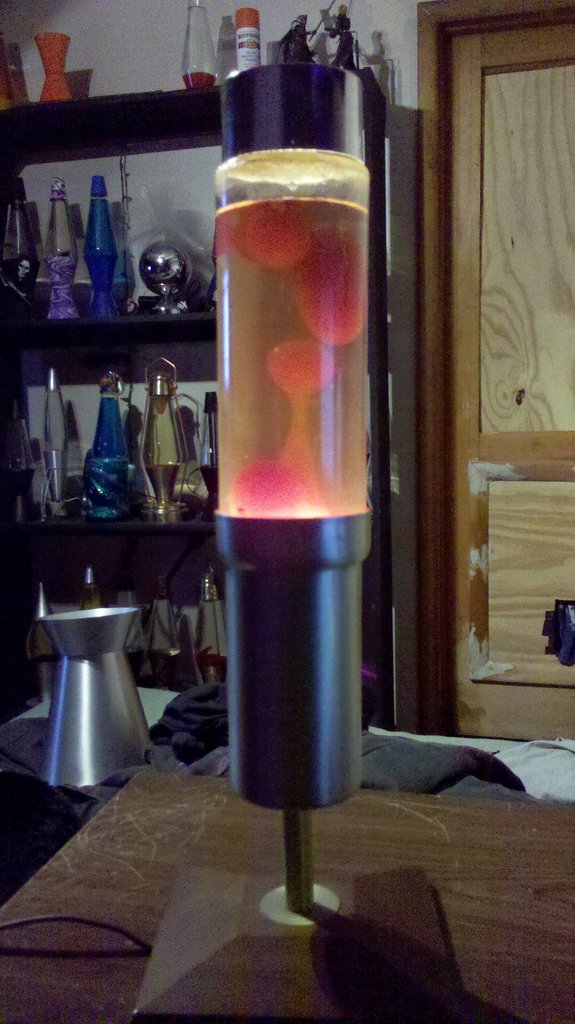 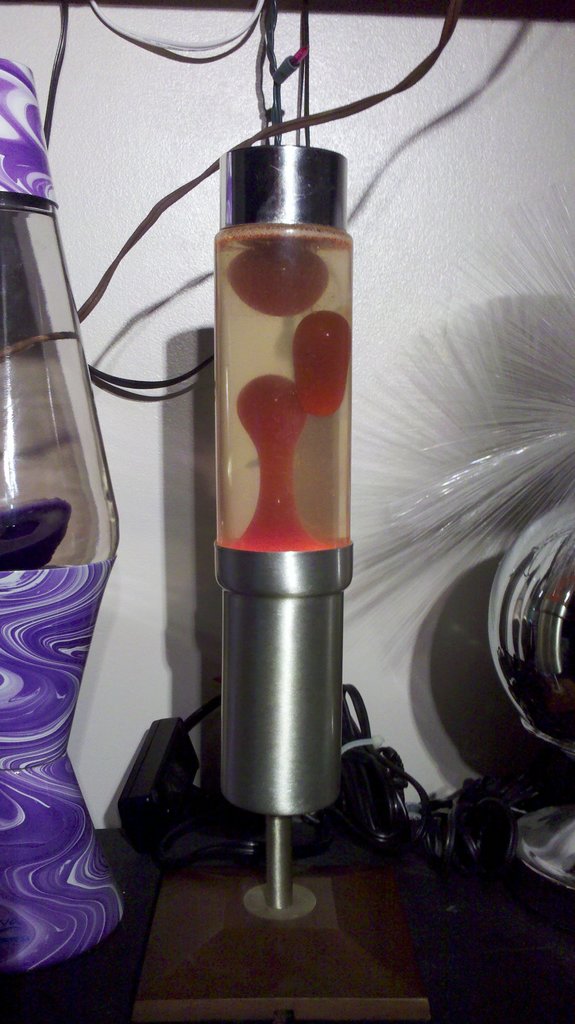 Here is the consort before I filtered it.

Permalink Reply by Erin on April 22, 2011 at 7:35am
Impressive. I wish I could have fixed mine. So what is your recommendation to someone who wants to refill theirs entirely and has NONE of the original contents?

Dilute a liquid down to 1/4th. You can easily dilute the liquid using distilled water, but I am not sure how to dilute the wax. Plus I dont have any way to measure the density of the wax other than guessing. I am assuming the wax is less dense thanother lamps too, but like I said I dont have a way to measure that. So my guess is adding some petroleum jelly to the wax will reduce its density.

Lets say the wax weights 1000 kg/m3 which it doesnt, but it makes things easy.

But what I did notice about the consort wax is when it hardened it wasnt really oily like other waxes from other lamps.

Like I said, I dont know yet what the mix is so I will update my posts when I get more information.

Impressive. I wish I could have fixed mine. So what is your recommendation to someone who wants to refill theirs entirely and has NONE of the original contents?

Permalink Reply by Sgt Pepper on April 22, 2011 at 2:58pm
could you use distilled water? (just out of curiosity)

Permalink Reply by Autumn on April 22, 2011 at 3:13pm
Actually thats exactly how you dilute the lava lamp liquid to the right density. I dont know how I forgot to put that in the original post... I will have to edit it in.


could you use distilled water? (just out of curiosity)

Permalink Reply by Autumn on April 22, 2011 at 10:01pm
I tried that. The wax flowed for a little bit but then it froze mid blob and never moved after that. It was like I was looking at a photo of the lamp. I could see the wax flowing within the formation, but the formation never moved.


No, only distilled water.

So what is your recommendation to someone who wants to refill theirs entirely and has NONE of the original contents?

i would say do a compleat lamp redo if it is a empty bottel or if you only have the wax then mix up a perc, water, salt and glycol mix etc


Impressive. I wish I could have fixed mine. So what is your recommendation to someone who wants to refill theirs entirely and has NONE of the original contents?

Has anyone gookitted a Consort? How well does it work? Back in the 90s I refilled two using the contents from new Lava Lite globes. They flowed, but weren't very showy.

Permalink Reply by Autumn on March 23, 2012 at 10:42am
Having opened many consorts and a couple jets I noticed they smell and look very similar. I am starting to think the really old lava lite lamps used the same formula as mathmos. Another thing that sould suggest this is why a consort runs on 15 watts, but if you use a more current formula it does not work out all that well. With mathmos opening their usa store soon, I may refill one of my already refilled consorts with the mathmos formula.

Good point Autumn - Mathmos / Cretsworth and Hagerty were closely linked as Hagerty brought the patents of the formula off Craven Wlaker (Cretsworth).

Allthough the designs and there marketing etc are and were completely different the formula was very similar. While time went on both mathmos and Lava world changed there formula (I am talking about when they were still USA made).

I "won" a red/clear Consort with box on eBay last week.  It had a rough trip through the mail.  Some of the liquid leaked out - about a 1/2".  I made a newbie mistake - didn't fully read the Consort information on Lava Library - and topped off the Consort with Midnight Century liquid.

After adding the Century liquid, my Consort stopped flowing.  After reading your post (MANY THANKS), I tested the density of the  liquid with my hydrometer (good for more than just making wine, I see).  It measured ~1.075!!  I was surprised, since your research showed that Consort liquid was around 1.00.  I decided to test my hydrometer -- yup, water tested correctly at 1.00, so the density of my Consort's liquid was accurate.  1.075 -- hmmm.

Why did my Consort flow at such a high density?  I'm not sure, but I think the liquid and maybe the wax must have been modified.  Strong smell, but it also looked like it had a LOT of surf in it.

I started adding distilled water and stopped testing for flow at 1.014.  The wax just sat on the bottom and flowed downward within itself.

I finally decided to refill with red/clear Midnight Century.  I measured the Century liquid density at 1.042.  After the refill,  I'm now running the Consort with a 25 watt bulb without the reflector.  I like it so much better now!   Honestly, my original, flowing Consort was unattractive -- worn out wax and slightly cloudy liquid.

Here are the results of the refill. 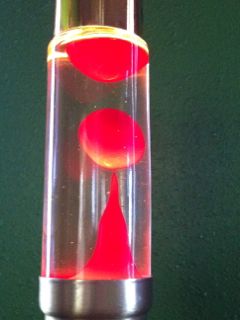 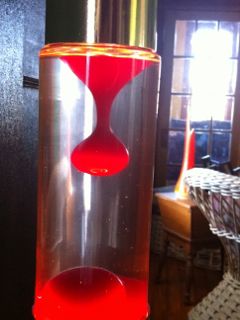 My takeaway from this experience is the Consorts are temperamental (putting it mildly), so don't expect to find an original, *attractive* working example of this vintage lamp.  Buy the cloudy ones with quality bases and caps and refill them.

Finally, the box that came with my Consort had the following "Special Instructions" sheet that I think supports your research on the Consort liquid's density.  Check this out: 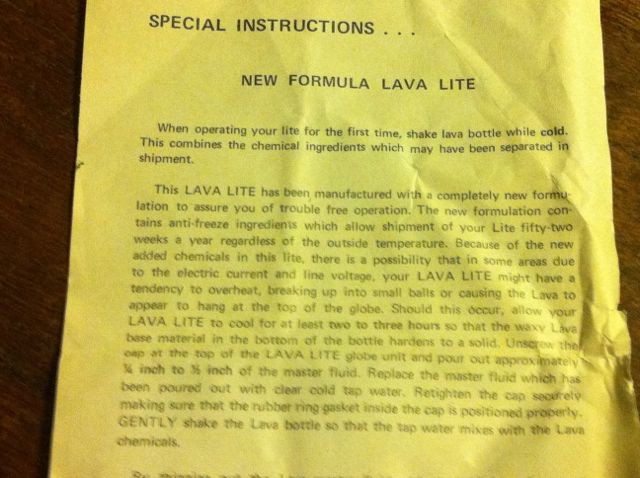 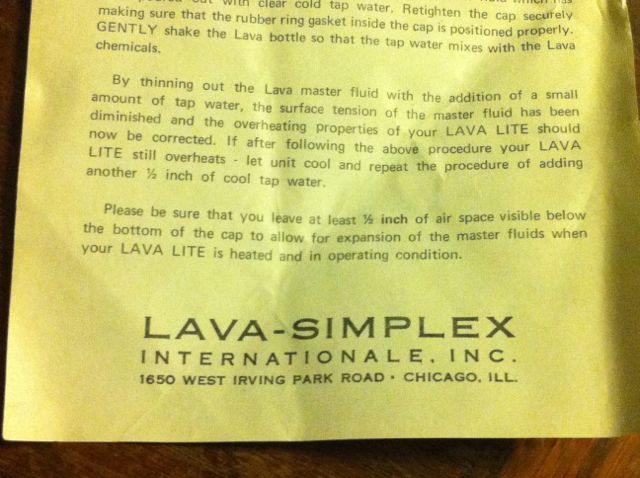 Interesting, huh?  Thanks again for taking the time to share your experience with this lamp.  You saved me a bunch of time and frustration.