Hello all, new to the site and have tried the typical fixes for this but no luck.
I recently ordered a mini goo kit to redo a 52oz lava lamp in hopes to finally get it going again after the original wax was dead. Was excited as I’ve seen some of the successful attempts on here with kits and they look fantastic.
I followed the instructions posted on the Goo Kit how-to on here, but unfortunately I didn’t have luck getting the lamp to flow. I used roughly 13-15ml of the surfactant and made sure to pre-coat the vase after thorough cleaning with boiling water and soap. I’ve ran the lamp with the original 40 watt bulb both without and with a dimmer with no difference.

The problem is once the wax heats up, majority of it floats to the top of the lamp, but it’s not actually fully melted. The huge blob that floats is still partially solid. I’ve left the lamp running for at least 8hrs hoping the half solid chunk would melt, but no luck. Only the bottom half of the chunk melts and the remaining wax at the bottom of the lamp will flow regularly and mix with the half melted portion on top. I figured it was a wax separation issue, so remelted the two portions together with the distilled water mixture mostly drained out, but this didn’t fix the issue once the lamp was up and running again. I’ve redone the lamp twice but same issue still persists. I’ve attached a few pictures to help show this.
I’ve seen people mention using 60watt bulbs instead, but not sure which bulb size fits these lamps besides the regular A15 appliance ones as I can’t find these in a 60 watt version.
Does anyone have any suggestions or would this possibly be a bad batch of wax?

This bulb should fit but I also can’t find it in stock . 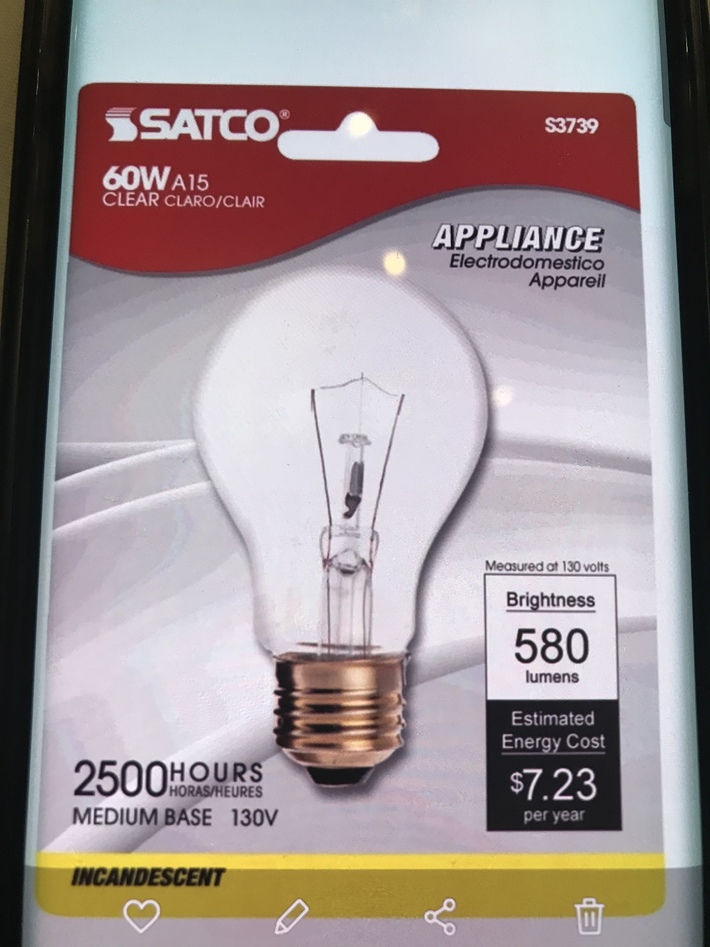 Not recommended because dont have the mirror like E14 R39 bulb.

When you completed lamp did you re-seal the lamp or just place a piece of foil over the top as it appears in these photos? Try semi sealing to original and try again and if it works then seal for good.  I have a lot of 52oz lamps and none so far have had a problem operating off a 40 watt bulb which gets very hot.  There may be too much heat escaping from the top of the globe.  There's also something about the pressure created within the globe from the heat that also makes these lamps roar.  Good luck.