Perhaps no model of lava lamp is as universally admired as the Coach Lantern series of lamps. The workmanship is top notch, and the copper or brass colored bases nicely compliment the warm glow of the lava. The glass globes are 52 oz, like the Aristocrat and century models. A fair bit of confusion surrounds the Coach Lantern model line-up. Hopefully the following descriptions will make this clearer.

The Crestworth Company in the UK is generally credited with the first version of this Coach Lantern: the Copper Coach Lantern. This lamp was market in the UK and in Continental Europe (versions of this lamp with French and German wiring have shown up in those countries). A U.S. version of the lamp exists (with North American wiring), and was marketed by Lava Corp in distinctly Lava packaging. There are two opinions as to the origin of the U.S. Copper Coach Lantern. One theory is that the U.S. version was manufactured and marketed by Lava Corp. The other theory is that the lamps were made by Crestworth in the UK, and sold to Lava Corp. which then packaged the lamps in their own boxes and marketed them in the U.S. The author of this article tends to lean towards the latter theory.

The finish on the Copper Coach Lantern is copper plate on aluminum. The small fake oil filler cap is on the right of the base. The bail wire consists of 3 pieces (two sides and a top bail wire). The two side bail wires are threaded into round top steel nuts which are riveted into the base. Small variations in filler cap design and the placement of the scribed lines on the base and top exist.

As far as is known, the Copper Coach Lantern is the only version of Coach Lantern marketed in the UK. All late model versions of this lamp, while hardly commonplace, are fairly easy to find for sale. The U.S. version is slightly rarer than the others.

In the U.S. the model line continued with what is known as the Matte Finish Coach Lantern. This lamp is similar to the Copper Coach lantern in that the filler cap is located on the right side of the base, and the side bail wires are screwed into nuts in the base. The lamp top and upper bail wire are different in design than those used on the Copper Coach Lantern. The entire finish on this aluminum lamp is a kind of salmon colored matte plating.

An early gift catalog advertisement from 1974 shows this model. This lamp is quite rare: 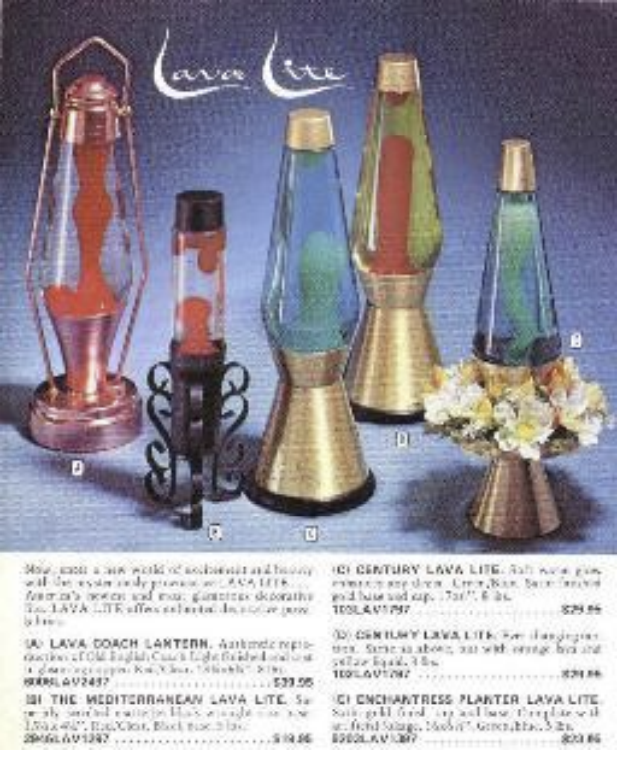 Next we have what is known as the Semi-copper Coach Lantern. The fake oil filler cap has been moved to the left of the base and doesn’t have the two scribed lines on it like the earlier models. Two versions of this lamp exist:

The difference between the two varieties is the design and finish of the lamp top: The next version of the Coach Lantern came in the mid 70’s. It’s commonly referred to as the Brass Coach Lantern. The lamp is made of lacquered aluminum. The finish is distinct to this lamp as it is indeed a brassy color, unlike the gold color of many of the other early lava lamps (e.g. the Aristocrat). The cap top is short, there’s no fake filler cap on the base, and the one piece bail wire assembly clips into holes in the base and is fastened to the top with screws and riveted brackets. 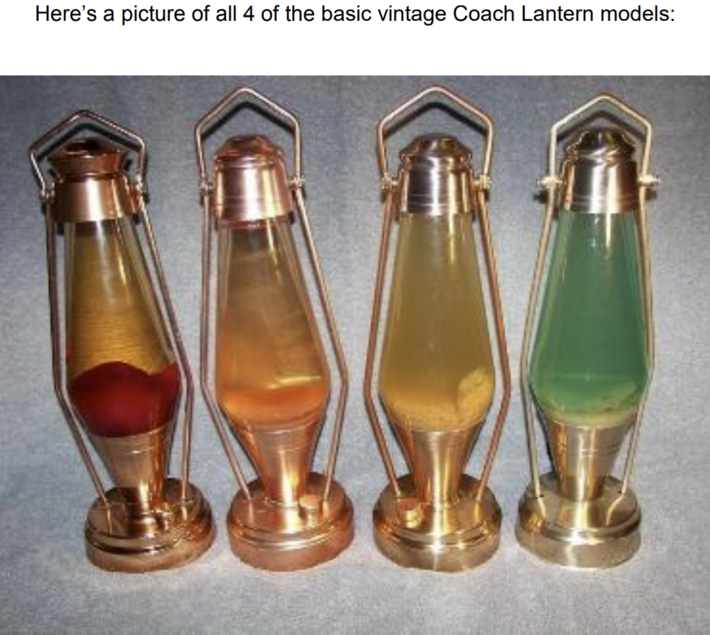 In 2007 a new version of the Coach Lantern was released in the U.S.: Although vintage Coach Lanterns with the bail wires screwed into the base can be picked up by the top bail wire (don’t dare try this with a Brass Coach Lamp or you’ll end up with a big mess on the floor!) it’s recommended to always support the lamp by the base when carrying it.

The Brass Coach Lantern was discontinued in 1991 or 1992. Copper Coach Lantern lamps can be cleaned up with a non abrasive metal polish provided the copper plating is in good condition.

As with other lava lamps, it’s possible that other Coach Lantern models may appear in the future.

Big thank you to OozingGoo member Fog Rider who provided the history of this lamp.

More photos of the Coach Lantern

Discussions on the Coach Lantern