I'm an artist, I just started collecting lava lamps, and just joined! I actually wouldn't really say I'm a serious collector, but I do love lava lamps, and have a few of them...or I will.

I've always loved them, but it wasn't until fairly recently that I actually owned one, a $10 job from Wal-Mart with blue water and yellow wax. It worked great...until the yellw wax became discolored, and the flow stopped completely. :( Then I looked into homemade mods. :)

All ready to go! I also bought a quart of goo from magma tower, and I have various ways of coloring it. I can't wait to get started!

Here's another lamp of mine, an orange lava glitter lamp (I didn't have any idea how scarce these were at the time, I just love transparent or shiny orange so I wanted this one):

Apparently they had one left, and I got it. :) Trying to find another one like it has proven impossible.

I got those for $15 apiece. :) I mainly wanted the orange one, but I like both of the other colors a lot. I feel like I got an excellent deal on that!

There is some damage, but I mainly plan to mod it anyway.

Those are some good deals, but...I paid way too much for this:

It's an orange elec-trick from 91, I think? It's not even the original run, but I wound up paying $67 anyway. I just had to have it. All the others sold from that line by this seller went for 30 bucks apiece...but the one that I wanted. LOL!

None of those are actually here yet though. I won them and paid for them, but I'm waiting on shipping. I'm so excited!!

Well that's all for me for a little while!

Good to meet all of you!

[EDIT] I also just bought one of these. 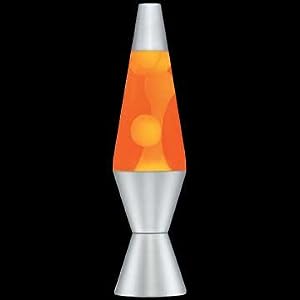 I can't believe I found one new finally! And now I am DONE for a while. LOL! Tax check is gone. :p

Thanks a lot! And yes, that's what this is. The box says that it was made in 2005. I bought it directly from the online retailer, on the clearance rack, even! I think it was $13. LOL! I really want another one to go with it though...bad.

I dont think any of us planned to seriously collect any lamps at first... Since you seem to love orange you should buy an orange mathmos jet and at least an orange vintage lava lite lamp such as a consort or a century. Maybe an orange fluidium too?

Well, I like the older ones simply because they are old, but I'm really really picky about particular aesthetics. This is 100% opinion, keep that in mind, but I can't stand very many styles of lamp. I appreciate the variety, and enjoy seeing all of the different kinds and variants, but as far as owning them...I only like columnar and classic diamond-shaped lamps, with few exceptions, I don't like bullets, rockets, twisted bottles, wavy bottles, fluidiums, etc.

I really do like the mathmos jet's style, and the orange ones I've seen do indeed look fantastic. I'd love one with a black body and orange glitter, if I could find one. But again, the cylindrical shape is very appealing to me.

Although I'm not a big fan of brass, the steampunk look of some of the classic vintage lamps like the imperial (which also came in orange) looks like it came out of HG Wells' Time Machine. I don't dare even contemplate trying to phenagle one of those though.

Thanks for the suggestions!

Oh, and I don't mean to say that collecting lava lamps is bad or anything, rock on. I just didn't really think I could count myself among the ranks of some of the people here, after seeing some of their collections!

Many of us started out small. I remember saying I've never top more than 10 lamps. Now I'm at 60. :) Some get bitten by the bug, some don't. Time will tell.

The orange glitter you have is not rare, but I'm sure it's spectacular. There's a 32oz. orange glitter that's rumored to exist, but no one's seen one.

The orange glitter lamp has been hard for me to locate again, but I understand what you mean. :) And yes! I really love it. It's glorious. I would of course LOVE to have a much bigger version, or any size for that matter, but I'm having a hard enough time finding even the 14.3" version again!

And you know...when I wind up getting all that I've ordered here recently, that will be 8 lamps already, right there. there's another 2 that I'm bidding on in a lot, but I don't know if I'll get those. If I DO, then that will be 10. And these people better not let me down...only one of them is marked "shipped" so far, and it's going on the third day now. *BITES NAILS* I have literally tried to buy that orange/white lamp with the silver base 4 times in the past, only to be told "Oh sorry, we don't have that after all." It's happened with retailers, amazon, ebay...sigh.

Both of those lamps you're talking about were made after Lava Lite's move to China for production. They might pop up on eBay every now and again.

You mean both sizes?

I just mean that, at first there were 6 colors available (if I understand correctly): White, red, pink, purple, blue, and green. The graphic they used to decorate the packaging for that line reflected that. Slowly over time, they discontinued them one by one, until right now when all you can get are 2-3 colors . During that time they offered an orange version, but only for a little while. Am I wrong about all that?

In any case, it's not the rarity that attracts me to a lamp. Of course the rarity is cool and all, but I just like it because it's beautiful. I actually wish they were more common! That way I could get a second one in that size more easily!

And I have been looking on ebay for quite a while, but no luck yet.

No, I meant both the orange glitter and the orange/white you listed above. Both of those were made after Lava Lite's move to China for production. The other lamps you have listed above (the ones with black bases and the one with an orange base) were made when production was in the US.