Refilling pre-1969 Lava Lites with cloudy liquid? Can anyone tell me how people are doing this using water?

I have a white squiggle Aristocrat, which was purchased on Christmas day 1966 according to a note scribbled on its instruction booklet. This is the sort that can run for days on end. The liquid inside was cloudy, so I tried to filter it; this was a bad move. The filter absorbed liquid, leaving the lamp down about 4", AND didn't really filter it.

I've heard of people here refilling with water, salt and dish soap, and the results, such as two different Imperials I've seen, look incredible. The snaky serpentine flow is preserved beautifully. I have a feeling the Imperial may have used a slightly different lava formula to aid it in starting, but I could be wrong; I know it isn't the think oil lava used by Crestworth in their Princess and other giant models; Imperials have wax, and my Aristocrat seems to have similar wax, having a sort of petroleum smell. Also like the Imperial, there is visibly less wax than one used to later-made lamps would expect: a modern 52oz. has over 1 1/2" of lava in it, whereas this Aristocrat has barely 1".

Can anyone here who has done this successfully, maybe even on a 52oz., walk me through this process? I'm assuming distilled water is involved, but I don't really know what sort of salt and/or what brand of soap to use, in what amounts, and how to do the fill and testing/mixing without stirring the lava up into a cloudy mess. I'd love to see my lamp get flowin' again, it was beautiful when I got it.

If you look closely in my photos of my Lava Pyramid, this sad-looking, cloudy globe can be seen at bottom center on a Decorator base, with a Lava Lite hang tag hanging around the globe. If restored, this lamp bottle would go back onto its original Aristocrat base and be 'decorated' with an original box, the hang tag (though that's actually from the 70s, it fits nicely) and copies of the instruction booklet. I could almost use it as a centerpiece for a display - hopefully...
~ Jonas

Permalink Reply by Erin on October 23, 2010 at 10:01pm
I have the same lamp with the same problem, so I'm going to watch this thread, too! Soft lava, not much of it and cloudy water. 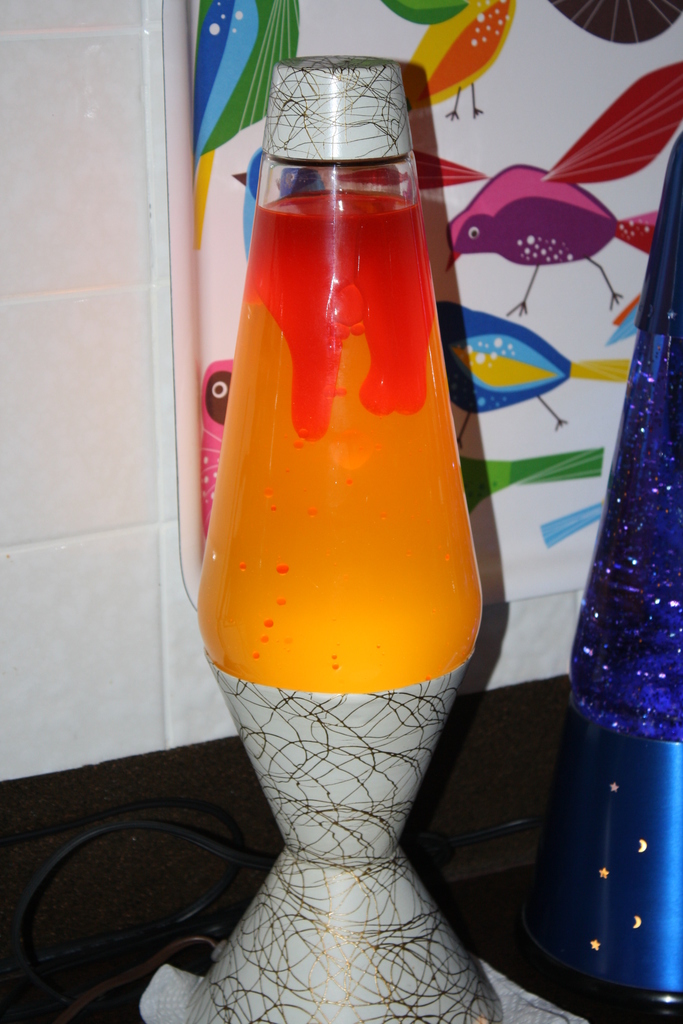 Permalink Reply by Pretzel Gal on October 24, 2010 at 2:20pm
I've done the distilled water / epsom salt water revamp and lemme just say what a royal pain in the tush it is!

Someone recently discussed using fog machine juice and propylene glycol as a solution, you may want to try that:
http://oozinggoo.ning.com/forum/topics/possible-clear-fluid?comment...

Me personally? I'm sold on the Goo Kit solution. Crystal clear liquid and you can adjust to the type of flow you prefer. Great Stuff!

Oh! One more thing! If you have to revamp your lamp, always always ALWAYS start with a new coil! I learned that lesson the hard way.

Permalink Reply by Erin on October 24, 2010 at 2:27pm
The only reason I'm not sold on the GooKit revamps are that their goo runs colder (it's lighter), so what you normally use on your lamps (40W) will overheat GooKit lamps more quickly. Sure, you can always run a dimmer switch, but you're still tacking on more expense.

I've GooKit'd 4 lamps now and though it's a fun process and your water is clear, mine overheat in about 3-4 hours and I'm left with tons of medium-sized blobs at the top of my lamp. Oh, stuck wax, too.

Permalink Reply by Pretzel Gal on October 24, 2010 at 2:34pm
I know what you're saying. I've put dimmer switches on mine, so I'm happy with them now. The only thing I don't like about the Goo Kit wax is that it doesn't go through that neat sculptural phase that the traditional lava wax does. It forms a big pillow, flips over and then starts blobbing. Not sure why your wax stuck, hmmm...

Permalink Reply by Erin on October 24, 2010 at 2:37pm
I'm having a bad lamp day, LOL. I've got two globes I did with no stuck wax and now I have two WITH stuck wax. And yes, I miss the lava crackle at the beginning, too!

Permalink Reply by Pretzel Gal on October 24, 2010 at 2:44pm
I had 2 months worth of bad lamp days last December when I decided to gift 2 people with store bought lava lamps for Christmas. I solved the problem with the water / epsom salt technique, but had to do them over and over and over to get it right. In the end... when ~those~ lamps overheat you get gigantic air bubbles at the top of the lamp which just won't go away until you turn it off. :/

Permalink Reply by Erin on October 24, 2010 at 2:48pm
That sounds...frustrating. LOL I'm about ready to chuck a few of these lamps out the window. I'm tired of working on them. :( I think I need to focus on one lamp at a time instead of two. I'm starting to have more problem vintage lamps than I want to deal with.

Permalink Reply by Jonas Clark-Elliott on October 24, 2010 at 8:36pm
I appreciate the advice, but I think in the end, I want to try the water solution, because the 1960s wax (with which the water route has apparently worked for some) is very, very different from the 1970s-and-later wax.

Case-in-point: Lamps made in the 1970s and later can run for about 8 hours before they need to cool down. Lamps from the 1960s - 1966-69, I'm certain - can and will, according to the instructions (and, before clouding, mine absolutely did) run for three or four days straight without overheating!