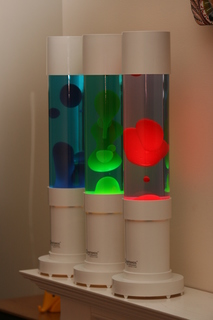 The Jets were aimed at 1st-time Mathmos customers.

Mathmos also released the neon Jet range from 1999 which had the wax matching the base and cap colours, ie: pink / clear globe with a pink base etc. -

There was also a option of a Jet glitter or glitter globe for the Jet these are 5-6 on the rairity scale.

When first produced the jet base and cap were made out of metal.

Discussions on the Jet