It is possible to make some rare or unreleased color combinations by swapping the fluids between two lamps. Lava Lite uses the same color liquid and wax in all of their lamps. A clear/red has the same wax as a rare blue/red. Likewise a blue/white has the same fluid as a blue/green. Some say to do a swap, the lamps have to have been made around the same time (same year), but even lamps from the same batch do not always flow if the liquid is swapped. The lamps may not always run after a fluid swap, but the fluids can just be swapped back if this is the case. The lamps can be rebalanced if they do not flow properly after a swap.

Below is a swap between a blue/yellow and a clear/green resulting in a green/blue and a clear/yellow. The middle lamp is a blue/blue made from swapping the liquids in a clear/blue and a blue/white.

As for Mathmos, there is not a whole lot of data on fluid swaps. WaggS did a successful fluid swap between a clear/white and a blue/blue pictured below. The discussion over his swap is here. 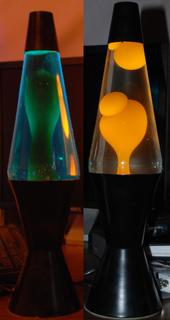 It is also possible to combine two 32oz globes into one 52oz globe to create rare or unreleased colors. The method is very simple, simply remove the liquid into a temporary container, melt the wax, then pour the wax from both lamps into the new globe. Be sure not to use all of the wax from both lamps. Also make sure when mixing two lamps you mix the wax and liquid from both lamps before refilling the new globe. You do this because if you use most of the wax and liquid from one lamp and, but only a little from the second lamp it throws off the density balance. Once the wax cools pour enough liquid to fill the container. 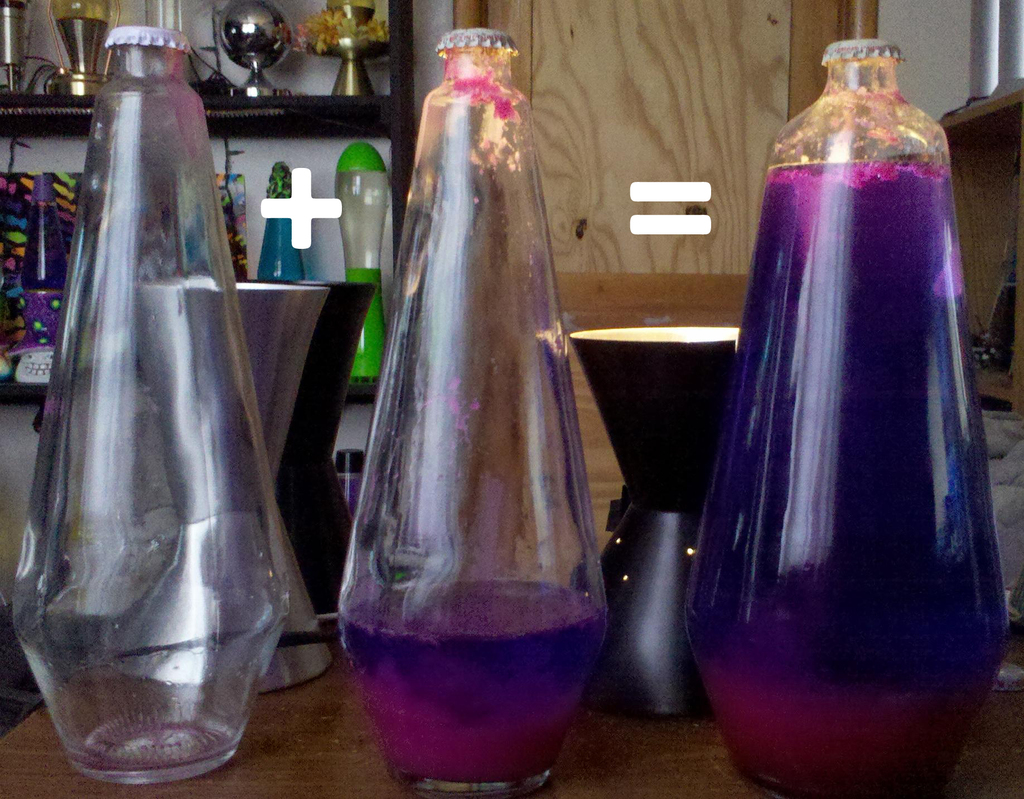 Here is yet another example of mixing different globes. The years on these globes are 98, 98 and 96. The lamp flows great without having to tweak the formula. I added more wax to the globe than the original mixture used as I found that the more wax I added the more flow I got out of it. I ended up using all of the wax from the three globes, and all the fluid except 10oz from the third bottle. The original coil setup was a small coil inside a bigger coil. Since the smaller coil seemed to make the wax form smaller blobs and less flowing streams I removed it. Removing the second coil caused streams of wax to flow up and down while other smaller blobs rained down from the top. 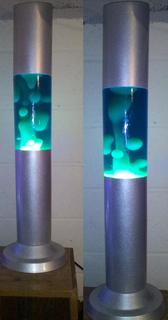 Food coloring can be added to the liquid to change the liquids color.

McCormick food coloring dye is the best dye to use since it has been tested not to damage globes or fade over time. Neon blue dye seems to resemble the original blue used by lava lite. Regular yellow matches lava lite yellow, but be careful not to overuse the yellow or the lamp will look nasty. Neon blue plus neon yellow makes a green thats fairly close to the lava lite green.

Be careful when adding dye to your liquid. Too much dye can cause the wax to look odd when moving through the liquid. Too much blue food coloring in a lamp with blue wax can cause the wax to look purple. Darker colors(blue, red, green) only take one or two drops of dye to get the desired color of water, while lighter colors(yellow, some neon colors) can take several drops. Dye can be added at any time, however it is best to add it when the lamp is running so that you can see what it looks like when the lamp is running. 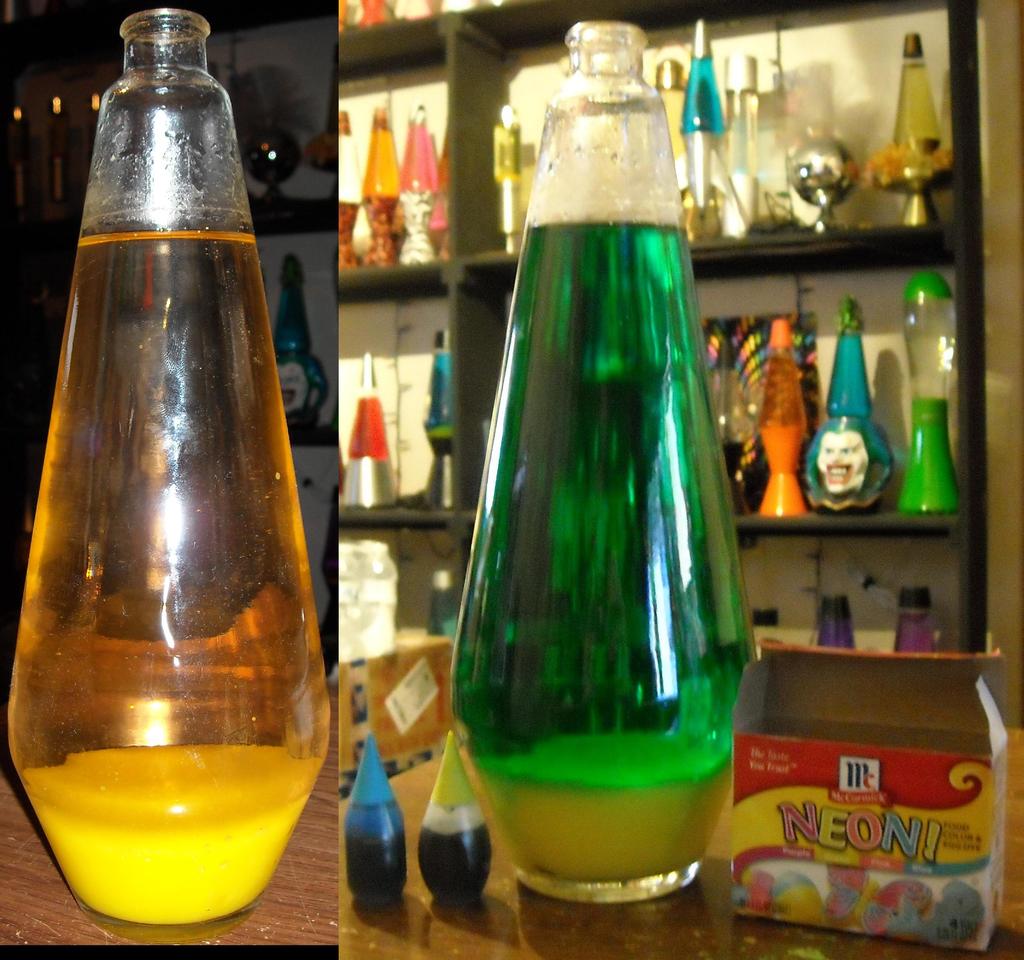 Wax dye from magma tower can be used to dye wax.

In the photo below the consort on the left and the consort in the middle were created from a blue liquid white lava globe. The blue liquid had faded to become clear, thus making the lamp clear liquid and white lava which is perfect for dying! In both the lamps McCormick yellow food coloring was used to dye the liquid. In the left lamp yellow goo kit dye was used to dye the wax. In the middle lamp yellow dye with a small amount of red dye was used to make orange wax. The lamp on the right was refilled by an unmodified globe. The globe was a clear liquid red wax globe that had a dye leak problem, but otherwise looked good. 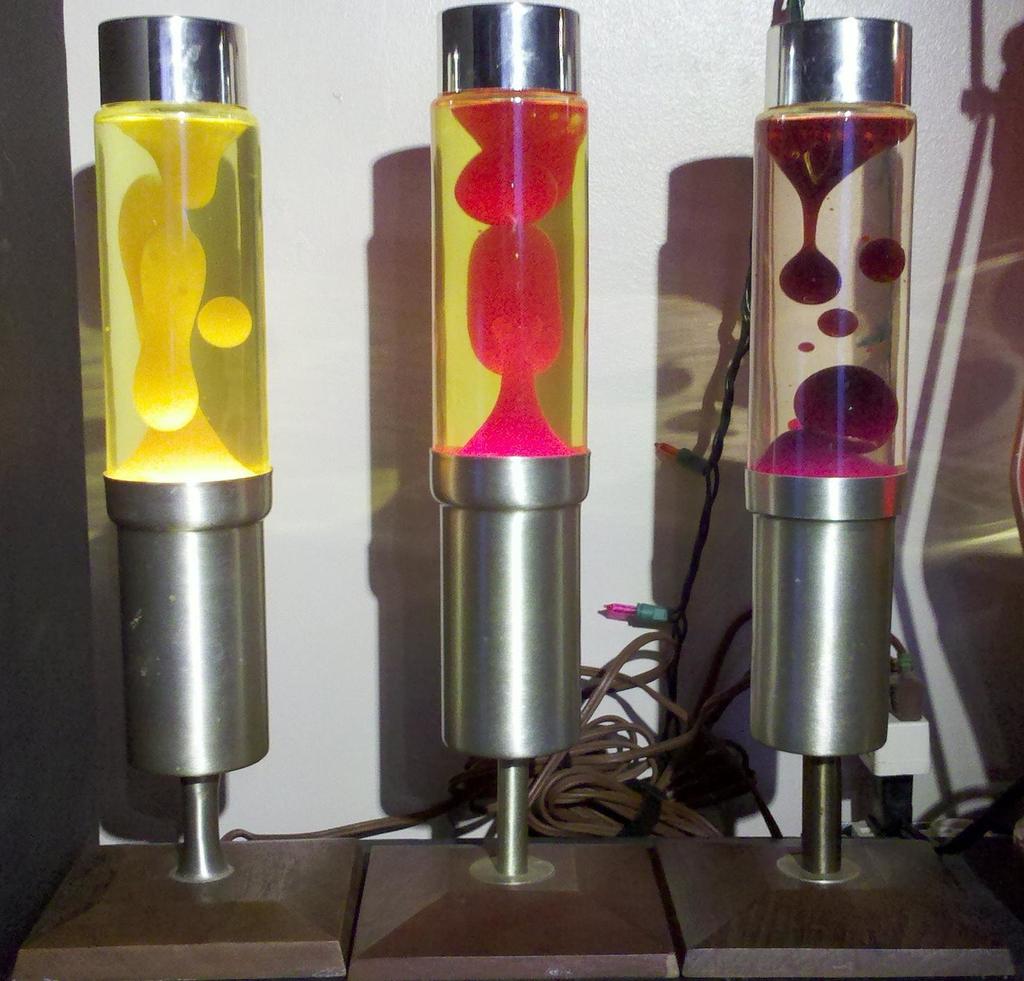 The key is to clean the consort bottles thoroughly. First remove the coil.  Do this by cutting a clothes hanger and making a small hook on the end to pull the coil out of the bottle. Clean the coil with Dawn dish detergent and scrub it with a toothbrush. Rinse the coil thoroughly and let it dry on a paper towel. Next, clean the bottles with dish soap and a bush that will fit inside the bottle. Then rinse them with distilled water. Next fill them with rubbing alcohol and let it soak for 10 or 15 minutes. Empty the alcohol and rinse again with distilled water. Allow the bottle to dry. Insert the coil. Hold the coil with a paper towel as you push it back into the bottle. This way no oil gets on it from your fingers. Next put some of the fluid you are using into the bottle and swirl it around and dump it back out. Then pour the melted wax into the bottle. Use a small funnel and tape a clean drinking straw around the bottom of it. This keeps the wax from splashing on the sides of the bottle. Let the wax harden on the coil. Fill the bottle with the fluid. If the wax separates from the coil the first time you try it, let the lamp cool. Dump the fluid out and save it. Put the bottle with the wax and coil on the base and let the wax melt and run for about an hour. This helps bond the wax with the coil. Once the wax is cool again, fill the bottle and try again. Some of these steps might be overkill, this is to prevent problems with lava sticking to the globe by doing it this way. - Manix5 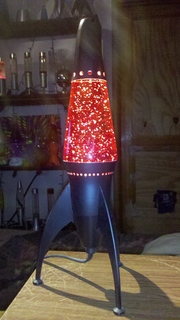 This is something I want to experiment with.