I'm setting the lamps up then heating them until they spike and turning them off. I can easily move the globes without causing cloudiness and have an easy to see palette of colors to consider when positioning the lamps and layering and/or blending the colors of the globes before I cut them on again. Once in position and lit I just wait for the flow to begin the magic.

Of course the crisp clear pics are with a flash but I'm digging the shots that are soley lit by the lamps themselves. Without flash the midnight bases fade away and the wonders of only the lava and its reflections are front and center.

I found the planned lamp pics to generally need no enhancement , (there are a couple that kodak instant fix have been used on like the neon reverse with the lamps and the mask and I'm learning how to take decent but will get better closeups so I don't have to crop unless it would be fun).

I got my first lava 2/2008 after having truly loved them for years but not acting on actually getting one. As soon as I got one it was clear this was an item that could only be enhanced by being in group. Boy was I on the money with that light bulb moment. I am flat out no holes barred in love with my lavas.

As the The Lava Masters have told us each lamp has it's own personality and it takes time to learn how each will react given a particular set of heat, light and proximity to other lamps factors. I'm also finding when the midnights are lumped close together sharing their heat they will often begin to flow in unison. ie: once a globe starts up with the penis flow there will be 7 to 10 others that quickly follow suit. While the penis' are racing each other to see who's the biggest and can last the longest there will be a similar number of lamps that will be in big lazy floating up and down orbs. Ha! I will get a good pic of that phenom on large scale someday.

The absolute cooliest thing I discovered by dumb luck; pics of lamps in their penis flow become 3D, looking like the lava is on the outside of the glass when I simply turn the pic upside down. Hahaha! 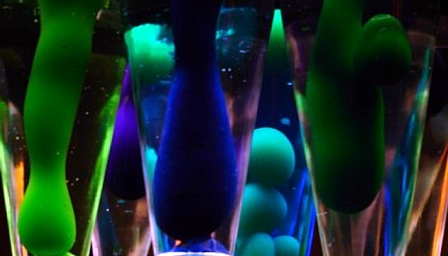 Comment by Woodvetch on May 28, 2008 at 5:16am
I got the first wave of prints in. No shock the closeups are truly killer. The group lamp shots not so much, too dark, (look much lighter online and where the insta fix gives a "blue hue" to the background on some pics no blue is seen only black.)
I've been invited to display 5 prints in an art gallery in July. Now the big job happens. Picking 5 out of 100's of pics!
Ha!
K

Comment by medicated goo on May 27, 2008 at 10:33am
And one other thing - it seems the clear liquid lamps with the colored wax seem to do the job better for me. I feel very fortunate that I learned how to create and experience this lava aura and hopefully it does not become too habit forming but I am afraid I passed that point of no return…..

Comment by medicated goo on May 27, 2008 at 10:20am
I am with you guys. I light up many lamps and it generally it goes in some degree of dominant colors at the time as I rotate colors a lot. For example, right now I am in the emerald and lime green and orange lava zone. Then it will be cranberry and teal and greens. And then I gravitate into the vintage red lavas and black and whites, etc., etc., etc. It becomes ethereal peace for me with all the lava flowing in glorious color and to feel the heat coming off these babies makes them feel alive. No, I have not been hiking the psychedelic trail but I am considering it.... I agree that I notice after a series of lamps have been fired up for a few hours the ones that are close to each other do seem to flow in a similar manner and patterns which only enhances the effect. Yeah I am a lava junkie on several levels I fear....

It's definitely Lava Madness, that 's why I enjoy this website so much. Every oozgoo member has the same wonderful disease! Ha!

The members of oozgoo have known for years what I am just learning;
Lavas are real good company and inspiration to have around.

There is a never ending of variation between colours and flows and all the the different combinations in between that can be caught on camera. I totally agree with you when you say that lamps complement each other and that you definitely have to have more than one. I think lamps are very social animals and need to live in unison.