Ebay Awareness!!! A banned user from OG messes with my auctions (If you sell on ebay I'd read this)

Hello all! Most of you know me pretty well and may have even bought lamps from me before off of ebay. Usually I'll post links to my auctions here since it IS the right place to do it, and when selling I'm much rather see my lamps go to a member here.  Well I recently just had 8 auctions end on Sunday. 5 of them went without issue even got a member from here to buy one (Thanks Again Chow :) But the other 3 auctions were all bought by a ebay user by the name of joana.1912 (0) with zero feedback, new user etc. I'm almost always weary about new ebay users, usually they are a shot in the dark if they follow through with paying or not. But that doesn't mean that new users are all the same. One of my 5 successful auctions was a new user with zero feedback, but he came to pick up the globe the next day since he was local guy. And that was fine and dandy by me, his shipping address was all legit and local nothing seemed fishy and he even called me and gave me his phone number. Now when it comes to this joana.1912 character a LOT of things were out of place. For one when you sell on ebay you can the view order details where it'll show the buyers shipping and contact information. So you can prepare your package for shipment when the payment is received and cleared. Now if you look at the screen shot I took and look at this guy's address the zip code its a real zip code. And also note that if you were to google any 5 digit zip code, you'll get zip code of some random city in the US. But what really through up the red flag for me was that fact that the physical address didn't exist in the zip code he listed. Which you can easliy search for it using google maps. Also If you also look at the screen shot you can see the phone number which isn't a US area code plus it has a extension? weird I know 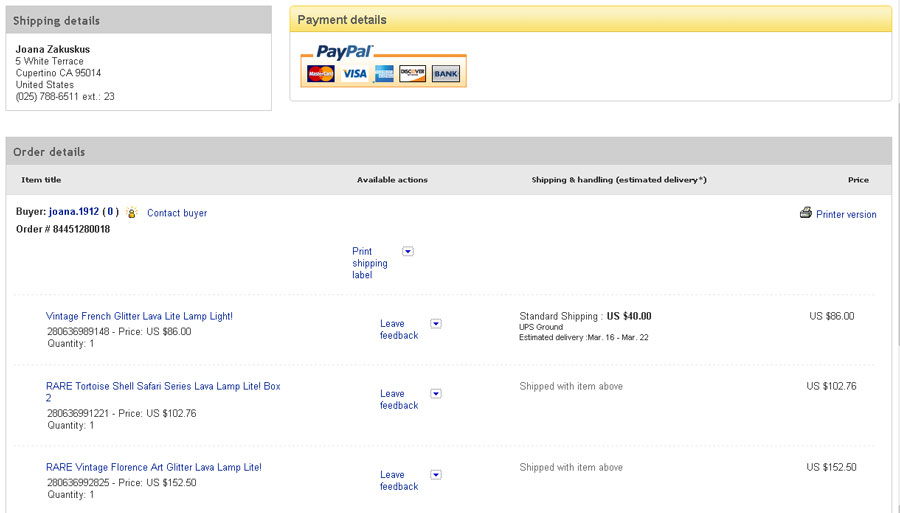 So as the story goes on.... this buyer sends me a message through ebay explaining that they'll be in town for the next couple weeks and would like to pick up the lamps to avoid damage in shipping. We arranged a day for pickup at a local restaurant 30 seconds from my work. Now during the correspondence the buyer did have a few weird comments and also ignore 2 of my requests for their phone number. Their comments were weird like they'll be driving a old Studebaker truck which was dark green.  Who would drive a old ass truck from Cali to here?  just didn't make sense. Also when it came time to set up a place to meet I mentioned the local hot dog joint called "Portillo's located here in Vernon Hills, IL" they came back to me with I can't find it listed in on google maps that they wanted the address. Now if you were to take everything I typed, inside the parenthesis, copy and paste it into google, it's the first search that pops up. So at this point I'm beginning to believe that someone is taking me for a joy ride in a shitty old truck to no where. But that's not all, their email address which is as follows abijamson@gmail.com. I looked into reverse email look up so I could see where this email came from but all those services cost money. And I've already wasted time on this guy why waste the money? After a while I started to notice that this email was a name so thanks to the savoir of googling (gotta love it) I typed in the name Abi Jamson into the search bar and low and behold look at the first 2 links on the search. (it was the first 2 links no its just one)

What I found is that this guy has been constantly harassing members here as well as posting vulgar and pornographic links has now taken it a step further and has decided to target OG member's auctions. He's been banned numerous times by the mods here, and it was confirmed, using all different types of user names including one of Abi Jamson. I just don't get why some people act this way nor why they singled out my auctions either. But needless to say the clean up is going to suck and not what I wanted to deal with but I held onto my lamps and offered them to the last bidders.

Here are a few things to do to avoid bullshit like this if you ever plan to sell on ebay.

I hope this helps you guys.


Times like this call for a Louisville Slugger.  Do unto other as you would have them do unto you - this moron has some payback coming his way somewhere down the line.

Permalink Reply by Dr. WHAT?! on March 10, 2011 at 6:29pm
Whats is plain silly about all this is this buyer is still playing dumb with me. But Crestworth Limited is Grant (found this out today) maybe he has some insight to who this person could be. since he seems to attack him often.

closing down chat wont make much difference. Only members can see live chat and probably know whats going on anyway.

its the inappropriate posting to areas of the site which can be viewed by non-members which is the most potentially damaging.

Permalink Reply by Arne on March 11, 2011 at 5:49am
Well, I also had trouble with this abi jameson prick..wanted to buy lamps, never paid. I wonder what the motivation is. But Abi Jameson isnt the only one who wanted the lampshades and never paid...some members on here seem to think its funny to make a deal and then back out. I must say I dont really dare to put them on ebay after this...no need of trouble again.

Permalink Reply by 2f8j4nfjbwyuq on March 11, 2011 at 6:57am
Thank you for this information
Hello,
The only way to find this person is to set-him up.
Let him find you.

Thank you for selling on e-bay,
Timothy

Well, I also had trouble with this abi jameson prick..wanted to buy lamps, never paid. I wonder what the motivation is. But Abi Jameson isnt the only one who wanted the lampshades and never paid...some members on here seem to think its funny to make a deal and then back out. I must say I dont really dare to put them on ebay after this...no need of trouble again.

I'm going to ask that "speculation" of who the problem person is be kept off the public board.

I won't dispute facts such as what happened with the auction or clear obvious transactions gone wrong.

But speculation and accusation in the open should not be here.

What members discuss in  private is up to them, but what is posted publicly needs to be factual without stimulating a flashback of events.

It's manageable, We the moderators continue to step up our efforts.

Unfortunately new memberships suffer as we have to slowly add them in and watch behaviors.

This has all become too much. It would sem that in the past two months a handful of people want to destroy this site with childish spite and drama. It's become so bad that, despite the best efforts of our moderators; it's become un-manageable. There has been talk of shutting down chat, and now one can't let others know of lamps they wish to sell.Wake up people, the Trolls are taking over!

Permalink Reply by Dr. WHAT?! on March 11, 2011 at 9:26am
I agree Jim, and I know if we ALL stepped up as a community, rather then staying silent about who this is and what they've done, we'd have a better chance preventing this from happening again and again. I can see if this thread was directed at someone whose a active member here and in that case it's a personal issue and should be handled privately. But this guy is attacking entire community and now has taken it a step farther and messing with people on ebay. With all due respect Weebs but I have to address this guy whenever I can. I want to help prevent my goohead friends from having to deal with this themselves. The way I see all this is that this guy is no different then a terrorist. We can pretend that nothing will happen to us, until one day it does and we are unprepared for it. If there's awareness of this issue out there and made public that makes it harder for this guy to continue on with his bullshit.

You're misinterpretting what I'm saying a bit.

Don't name names unless you have unquestionable proof.

Communicate on the pure facts.  I know there was a prior member who swindled a number of people.

In a case that has clear cut proof, facts cannot be disputed.

Right now the identity of this behavuour is speculation, so no public accusations until the culprit is identified.

What is fact,  is the identified email address and a named account on this system.

This is undeniable proof that links the two together. So this warning should be taken seriously.

I'm concerned as you all are.

Ya gotta figure whomever this is has some serious mental issues. For someone to spend the time and effort to disrupt the lives and peace of others like this reveals they border on anti-social and psychotic behavior.

Treat them as a serious mental patient.

For the purpose of public consumption, Share fact without speculative accusation.

Permalink Reply by WeeboTech on March 11, 2011 at 10:09am
That's not the complete answer. there are free proxy servers around the internet.

I hear ya and I believe I've done this too. The fact is that this guy, Abi Jamson, is the one who messed up my auctions and is the one whose been banned from here for the reasons already known. This is the proof like you said and pure facts.

You're misinterpretting what I'm saying a bit.

Don't name names unless you have unquestionable proof.

Communicate on the pure facts.  I know there was a prior member who swindled a number of people.

In a case that has clear cut proof, facts cannot be disputed.