I'm going to try to retrain as a Vet, so I am moving my art stuff into a cheaper studio space. I'm going to sell a bunch of stuff including some lamps. I will bung some pictures up when I have time and direct folk to E-bay. I will probably just sell here in the UK, but I have one or two things that might be worth shipping. 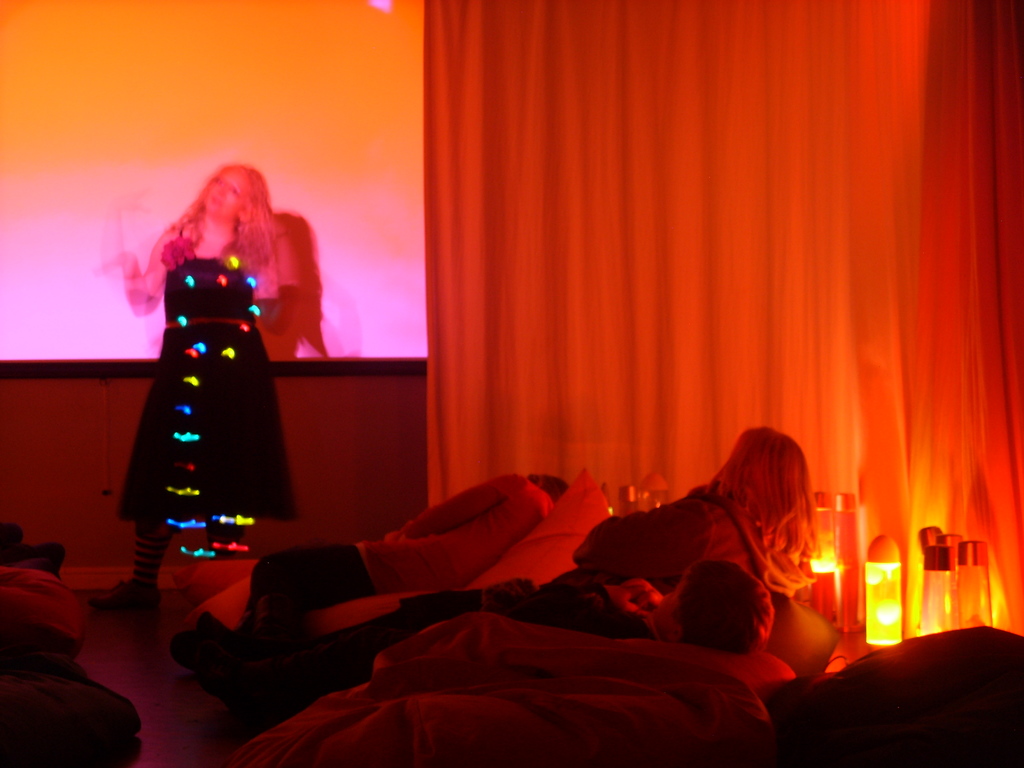 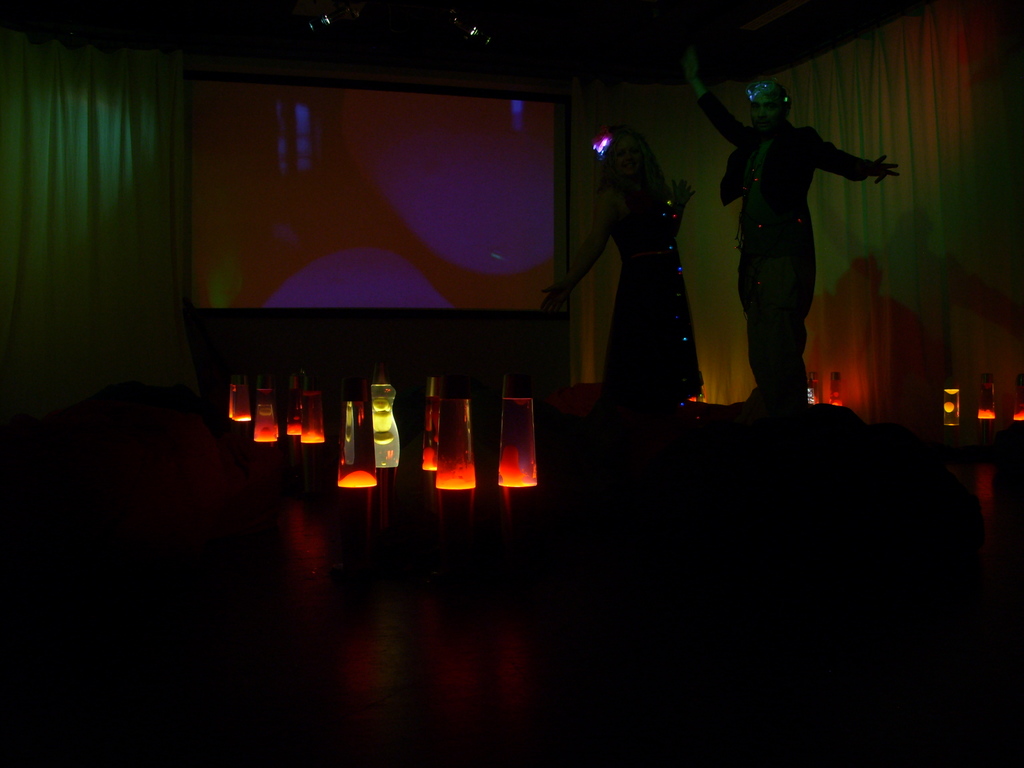 Here are a couple of images from the Lava Lamp Storytelling Forest that I did a couple of months ago. My colleague Amanda told stories to people as they rested on the bean bags. I helped out by wafting the audience with board, sprinkling them with glitter…

Well I got my good friday Excalibur today (along with a deco, chrome, standard-lamp) so now have three in the space of a week, (total cost £14 and a bit of petrol) in slight variations of blue/yellow with a sun design.

Well I still haven't gotten around to posting more photos, I have plenty stored up now though. I bought two Excaliburs today, not quite by accident, but certainly by coincidence. I went to a boot fair and got one for about £9 and came home to find a bid I'd put on a large lamp was successful at £6. I know these lamps are popluar (and since having one in my living room) also very large. However I don't much more. Would be good to have a directory of interesting non Lava/Mathmos lamps. Might…

I'm beat. Did eight sucessful performances of the lava lamp artwork. Though one lady did smash a globe and cause a small flood. Glad it's over now and going to get some well earned sleep.

For anyone interested in the artwork I am collaborating for, here are the details, including it's rather grandiose title:

Cloudwatching In the Lava Lamp Forest of Stories.

Been reconditioning my Hotrock lamps in preparation for my Light Night artwork. Have been filtering, topping up liquid and wax and adding surfacant. I also have been heating the lamps to try and remove wax from the sides without having to empty them all (as i don't have time) but managed to be a little careless. i dropped one, just emulsifying and cloudyness, no breakage thankfully. I also popped one in a champagne style and need to top it up again now. I just hope it will all be right on…

On the 10th of Feb I will be debuting a lava based art work with my friend Amanda. Light Night happens in a few cities other than Nottingham, but it's basically a festival of light themed art works and performances across the city centre. We are taking over the studio at the Broadway cinema, I'm building a forest of lava lamps and Amanda will be telling stories. The idea with the lamps is that many of them will be at the stage where the wax erupts into strange rock-like formations and people…

Well was having a rubbish day, so decided to trawl the local flea market and charity shops for some globe lampshades for a deco ceiling fitting. Had no luck with that but found a Telstar for a fiver. Was very welcome as I was having no luck on Ebay, the last one I was looking at just jumped to £18. Little dissapointed by the lime green wax/clear colour and was going to swap in a red/violet, but now I've got it plugged in and working I've completely changed my mind.

Decided to stop buying lamps for a while, to try and save money, but ran into a Lamp Topper (boxed) for a couple of quid so decided that didn't count and snapped it up. Wonder what else I can spend my money on the next couple of months that's not actually a lamp?

No Valentine's love for me. I got home to find that my Landlady had smashed one of the Hot Rocks lamps I have been collecting for a large artwork. On the bright side it was only one and I still have 26 more left.

Still not gotten around to photographing any more of my lamps. I have made a few more purchases and converted a friend to Lava with a lovely orange/violet Astrobaby that I found at the market.

I also picked up a wonderful bottle that will turn into a lightly complicated lamp build. I think it might be worth it though, as there i actually a chance Bhodan might not have made one already. Won't go into details as it will ruin the surprise... many month down the line that is when I…

I seem to have filled my studio space with crappy generic lamps of all sizes and shapes. However the upside is mt bedroom just has one Astrobaby in it now and I can actually move around. Well there is another boxed which will go as a christmas present and once I've cleared my Fluidium that will come back... hmm as might the Magma, but I have great hopes of not letting too many of them back into the house, it's like they breed when they're together. I have to think of my housemates, my ability… Continue

Hi folks, I have managed to move house twice since my last post. Sorry for not manging to continue the blog and this is the first time I've checked ino OG for many months, but things are a bit more settled now. However I have continued to collect and make lava lamps in the mean time and i now have an art studio space in which to work. I will post a pic of my cocktail shaker lamp soon and then have to decide what to start on next, glass slipper, fish, rain drop or body. I do also have to do my… Continue 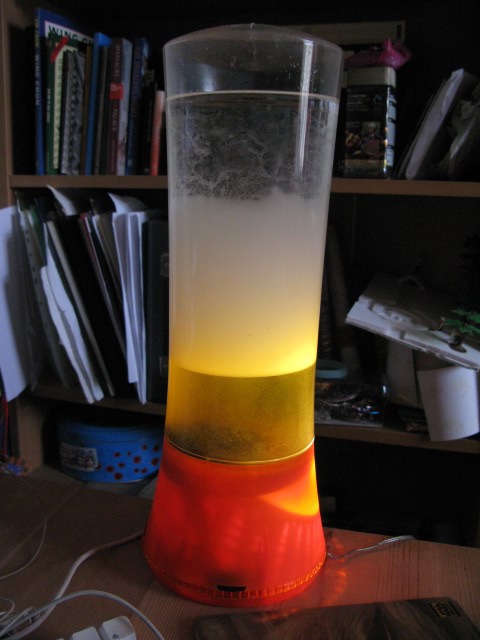